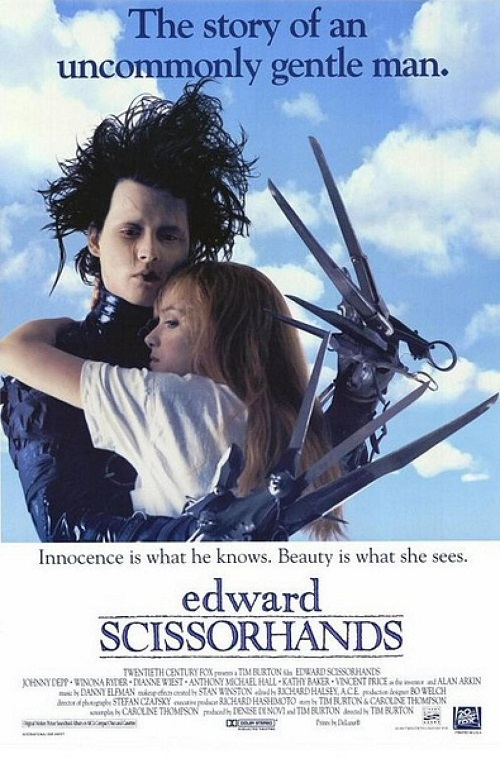 Burton holds a place in the hearts of many a young person with alternative a penchant for “alternative” aesthetics. His films such as Beetlejuice, Corpse Bride, and Sweeney are pretty much a staple of any self-respecting goth and emo kids. Edward Scissorhands is considered one of his greatest works and marks the start of his professional relationship with actor Johnny Depp. I mess up my hair and slathered on the make up before heading down to George street cinemas for their In the House screening of this cult classic.

The MCs for the evening were Jason ‘Jabba’ Davis, David ‘Quinny’ Quinn, and Jill who opened the evenings proceedings with a quick “cool t-shirt” competition. The audience was a bit cold when it came to showing their appreciation for the awesome designs that were on display but Quinny took charge and made sure that the geek-chic shirts won through. After this rough and dirty contest, the three sat down to talk a bit about the film’s trivia. A highlight I found quite amusing was the fact that the production actually bought all the houses in a specific cul-de-sac in order to get repaint them in a pastel style. One resident refused to sell their home to the producers and Burton had to start making plans for shooting around the one house which would stand out. Luckily for everyone involved, the resident ultimately relented and they were able to quickly repaint the house in appropriate colours in time for the shoot. 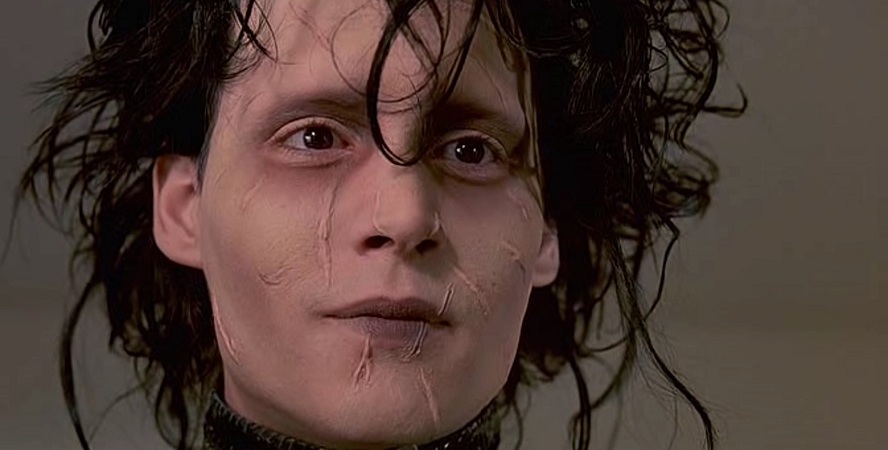 The film opens upon an idyllic suburban neighbourhood somewhere in America. The Peg Boggs (Dianne Wiest) works as a hapless door-to-door saleswoman who decides to visit the creepy house on the hill in her hometown to see if there’s a prospective customer there. Instead, she meets the creation left behind by a mad scientist; an artificial man by the name of Edward who has scissors for hands. Peg takes pity on him and brings her back to her house to look after him. His presence becomes a focus of curiosity and novelty for the neighbourhood as it turns out that, despite not being able to do a number of everyday activities due to his unusual hands. He tries his best to overcome his shortcomings and fit in to the community but he soon learns that the housewives of suburbia can be just as bloodthirsty and cruel as any movie monster can be. 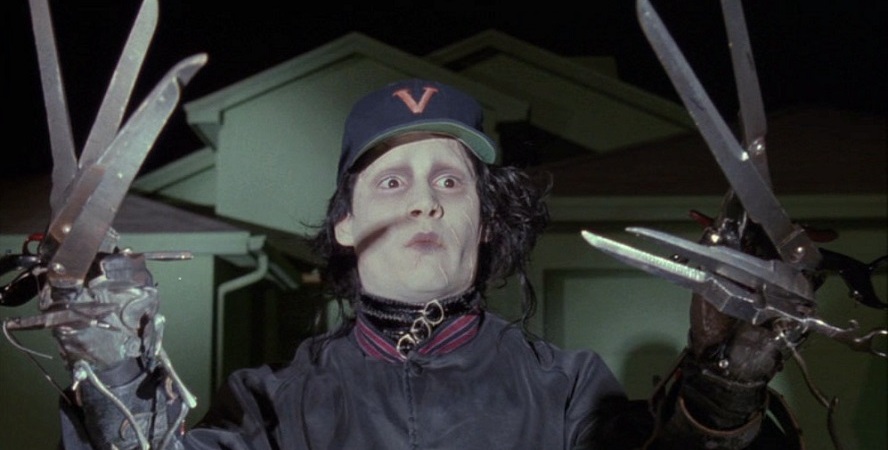 Depp turns in strong performance as the wide-eyed protagonist. Most of his work comes through in his physicality of the character and you pretty much understand everything you need to about the character through that. With Depp, Edward is an interesting mix of awkward and purposeful. Most of the time, Edward hobbles around with a stiff gait and the expression of a lost puppy. It’s an expression you’ll know well by the end of the movie because it’s pretty much the only face which Depp pulls throughout the film. There’s honestly not too much range here for the character, which can be seen as a missed opportunity on the part of the film, but I feel that it does add to the film’s charm.

To be honest, none of the characters are played with too much depth to them. Pretty much everyone is a caricature of either the gossipy/amorous suburban housewife, the religious zealot, and the bluntly self-assured, 50s-esque family patriarch. The actors know what notes they need to hit and the writing lets them consistently hit them. They’re all fairly limited in how fleshed out they are but they generally give you a good understanding of who they as well as leaving a lasting impression upon you.

These characters, although little more than two-dimensional, get to Burton’s central theme of complacency within modern suburban life. All the housewives are invested in gossip and drama mongering in place of pursuing any developed passion. Pretty much nobody has an ambition beyond short-term ones such as acquiring material wealth, getting laid, or getting attention for however long they can. Edward, by comparison, only longs for love, companionship, and a desire to be made whole (and regular). His desire for an ordinary life can be seen as quite wholesome but we see throughout the film that this sameness can turn into fear of the unknown and the strange.

Edward’s creative ability is directly related to his unique impediment; his scissor hands. Although his uniqueness makes him standout and gives him these wondrous capabilities, it’s also what ostracises him from the rest of society. While they accept him when he’s able to put his talents to use for them, as soon as they perceive him as acting out; they shun him as an outsider. Edward’s journey is ultimately unresolved; no-ones learned anything or solved any problems. Everyone in suburbia returns to their regular humdrum lives and Edward is back to his lone existence at the house up on the hill when the story ends. That ultimately makes for the most horrifying reveal of all, the monsters in the story are the people and that they’re unlikely to ever change to be anything else. It’s not a film which really ends on a happy note so maybe avoid it if you’re looking for something with a lighter tone. 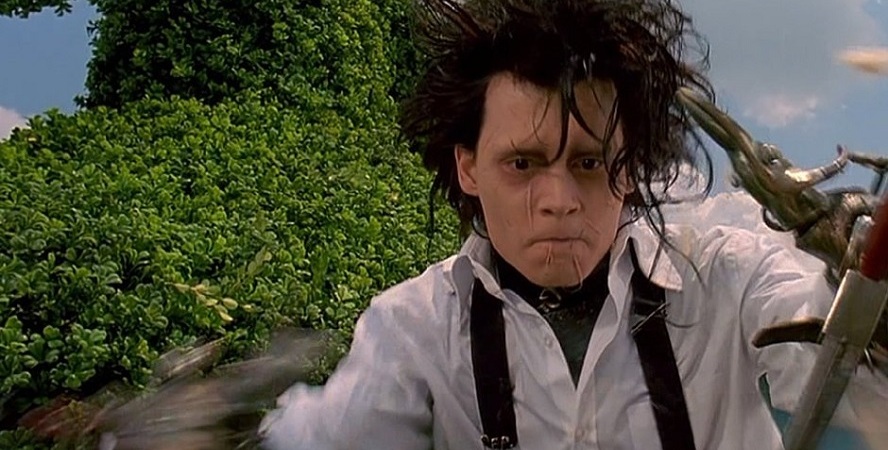 The film has a striking colour palette and you can definitely see the influence of Burton upon the visual design of the sets and Edward’s costume. The decision to design the houses and suburbanite costumes gives the film a unique look with the pastel colours giving the sense that this film takes place during any decade of the recent past. It gives the film a period feel without actually having to give a date for when it’s set. The mansion, the inventor, and Edward’s character design are all distinctive with them being equally eerie and kind of cute. It’s a hallmark of Burton’s style to revamp horror elements to make them more kid friendly while still maintaining some of that horror aesthetic. 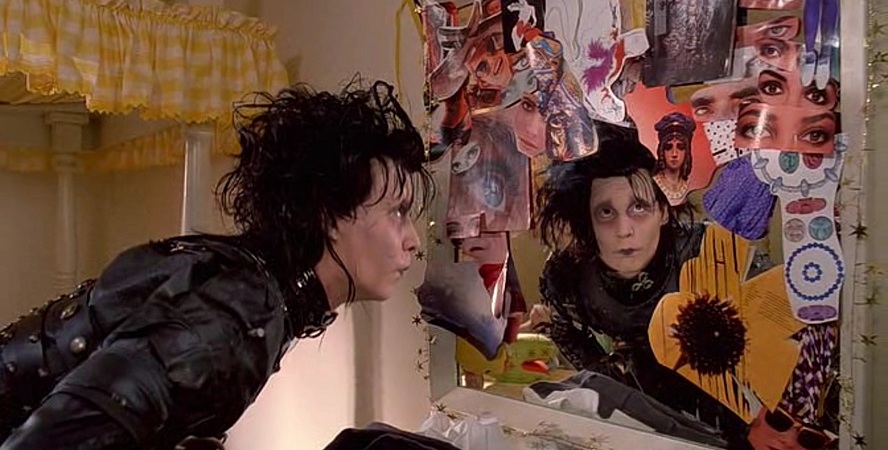 Danny Elfman’s score is on clear display throughout this film. Elfman has talent for being able to change gears with his soundtrack from tension to whimsy with ease. It serves him well in this film and it matches the thematic concerns of Burton’s quite well. Of particular note throughout this film is Burton’s use of music to create tension in a scene. He pretty scores a lot of these moments almost as if they were in a horror movie. Although the film is decidedly tame in terms of actual horror (the climax might scare some people… slightly) but it certainly creates an interesting feeling when watching this film. 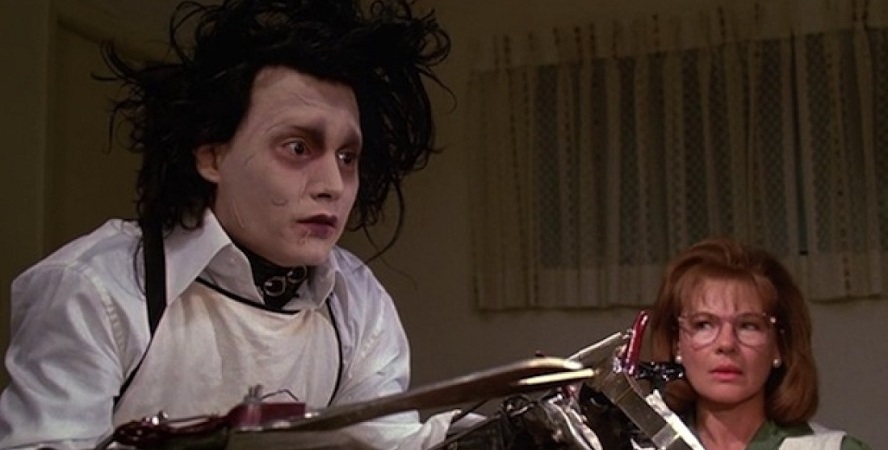 Overall, I really enjoyed my time with this film and felt that I got a lot out of a repeat viewing. The story is one which will certainly strike a chord with anyone who understands what it’s like to be maligned for being different although it is definitely populated with characters who may lack any sort of greater depth to them. The visual style is distinctly Burtonesque with his well known and much beloved mix of creepy and cute. Elfman’s score is used to great effect by Burton and it’s clear to see why the two collaborate so often on projects. It’s clear to see why this film is so beloved by so many and why it has found it’s way into the hearts of many alternative/emo kids. This film and In the House earn their kudos for reminding me what it feels like to be a misunderstood teenager!

Edward Scissorhands is a resoundingly well made movie which has earned its cult cinema status.
9