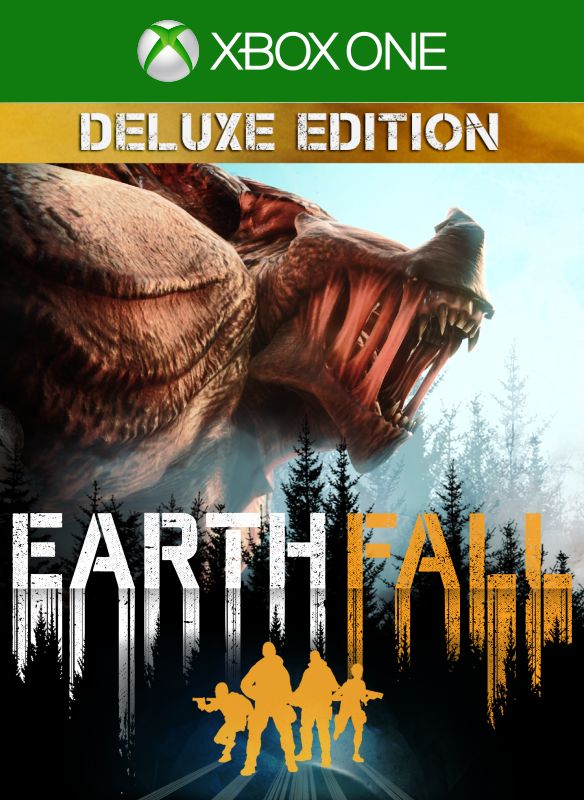 We all know Valve’s terrible track record for games with the number 3 in the title. So, while gamers wait for to see if Left 4 Dead 3 suffers the same fate as Half Life 3 and Half Life 2: Episode 3, developers are looking to fill the gap with their own take on four player co-op shooters. Holospark is the latest to step in the ring with Earthfall. The game aims to modernize Left 4 Dead with now standard FPS features like sprinting while putting their own spin with tower defense type equipment.

Earthfall is set in the near future after aliens invade Earth. The game follows the adventures of Maya, Roy, Jonas, and Danny as they seek out other survivors. Currently, the game has two campaigns of five missions each plus a collectable lore section. The in-game story is minimal, which is understandable for a multiplayer game like Earthfall. The real meat and potatoes are in the lore section. The overall story is entertaining enough to give some context to the story but isn’t interesting enough to be captivating. The characters end up being dull and one dimensional due to a lack of lines. The general writing quality is okay for the most part. Most of it is passable, but there are a few lines that don’t make much sense in conversational English or are really corny. 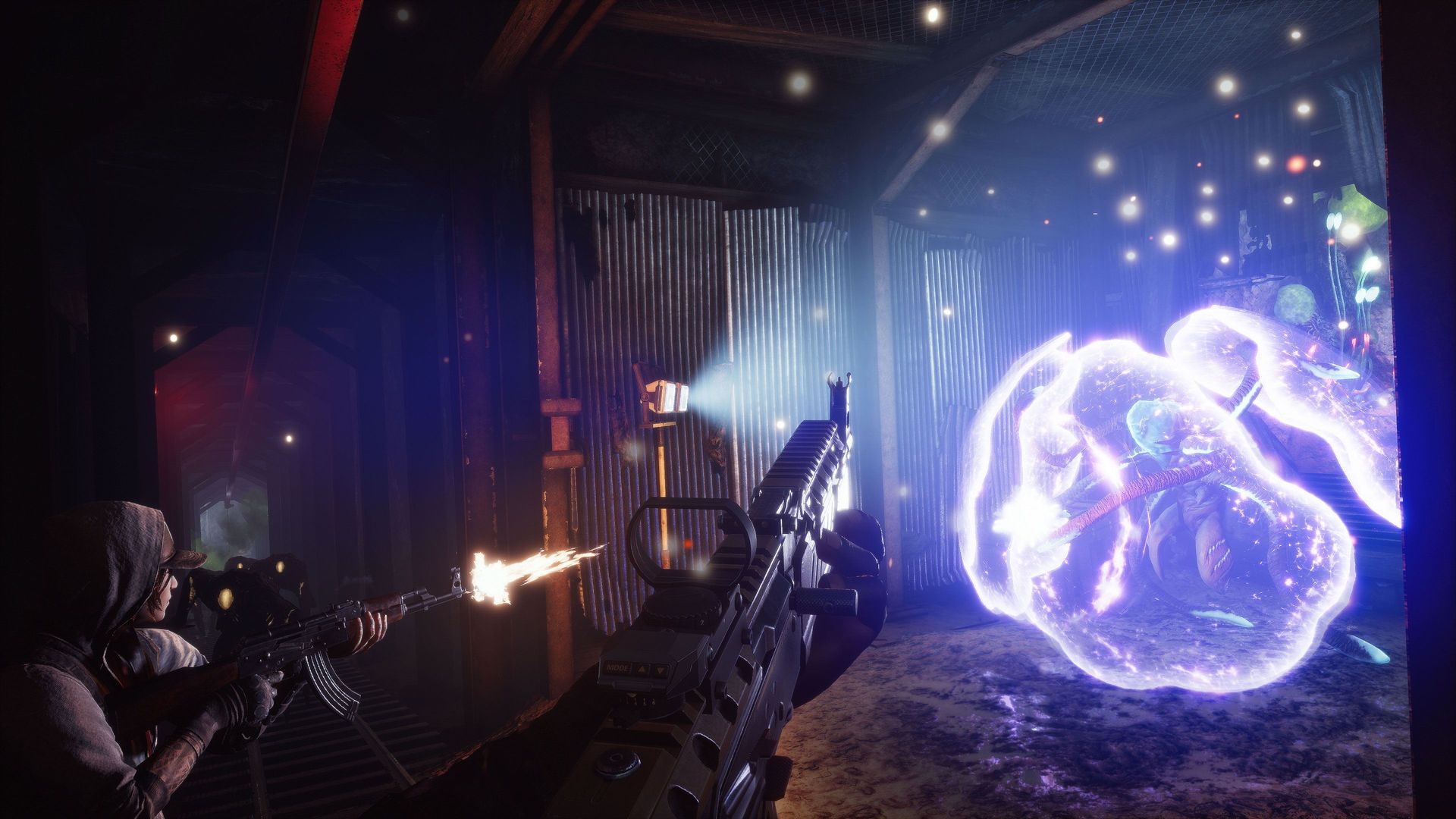 Earthfall seeks to be the spiritual successor to Left 4 Dead 2 by copying the co-operative gameplay and adding a few modern touches. The basic formula of four players with guns battling against hordes of minions with a few special enemies interspersed has not changed. Holospark has created a few of their own special enemies with some mixed success. Beasts, Sappers, and Threshers are almost direct copies of Left 4 Dead’s Tanks, Boomers, and Hunters. Whiplash is a giraffe-like alien that grabs players and attempts to trot away with its prey. Whiplash is a bit of a flop as it’s usually very easy to kill due to the need to be in close range for the initial grab. The Enrager is a more entertaining enemy with its ability to increase the difficulty level of the alien horde. The Blackout is another excellent special enemy, offering a ranged alternative to the Beast mini-boss.

The weapons are poor. While it’s nice to see modern FPS features like sprint and aiming down sights, the guns feel poorly balanced and clunky. There is no incentive to use anything beyond the standard pistol and an automatic weapon. The starting SW 22A pistol is decent enough, especially when combined with a second pistol. The higher calibre Vendetta pistol on the other hand doesn’t offer much of a damage boost over two SW 22As, but the rate of fire is atrocious. The automatic MP5x and the AK variants all offer solid rate of fire, accuracy, and time to kill. The so-called specialty weapons should offer intriguing alternatives for specific playstyles. Unfortunately, they are so hobbled in one way or the other that there is little reason to sacrifice the balanced performance of the MP5x or the AKs. The burst fire Combat CVA should cater to users with excellent aim and a willingness to engage further out targets, but the damage drop off is too close to make it worth sacrificing automatic fire capabilities. The penetration of the Glintec rifle puts it in a similar situation. It’s slow rate of fire is rewarded with minimal penetration, making automatic weapons a more reliable way to clear hallways. Shotguns are notoriously difficult to balance in video games. Holospark is the latest to fall short as the shotguns don’t hit the right balance between range, damage, and rate of fire either. The Valkyrie grenade launcher is probably one of the better alternative weapons, trading rate of fire for excellent splash damage. 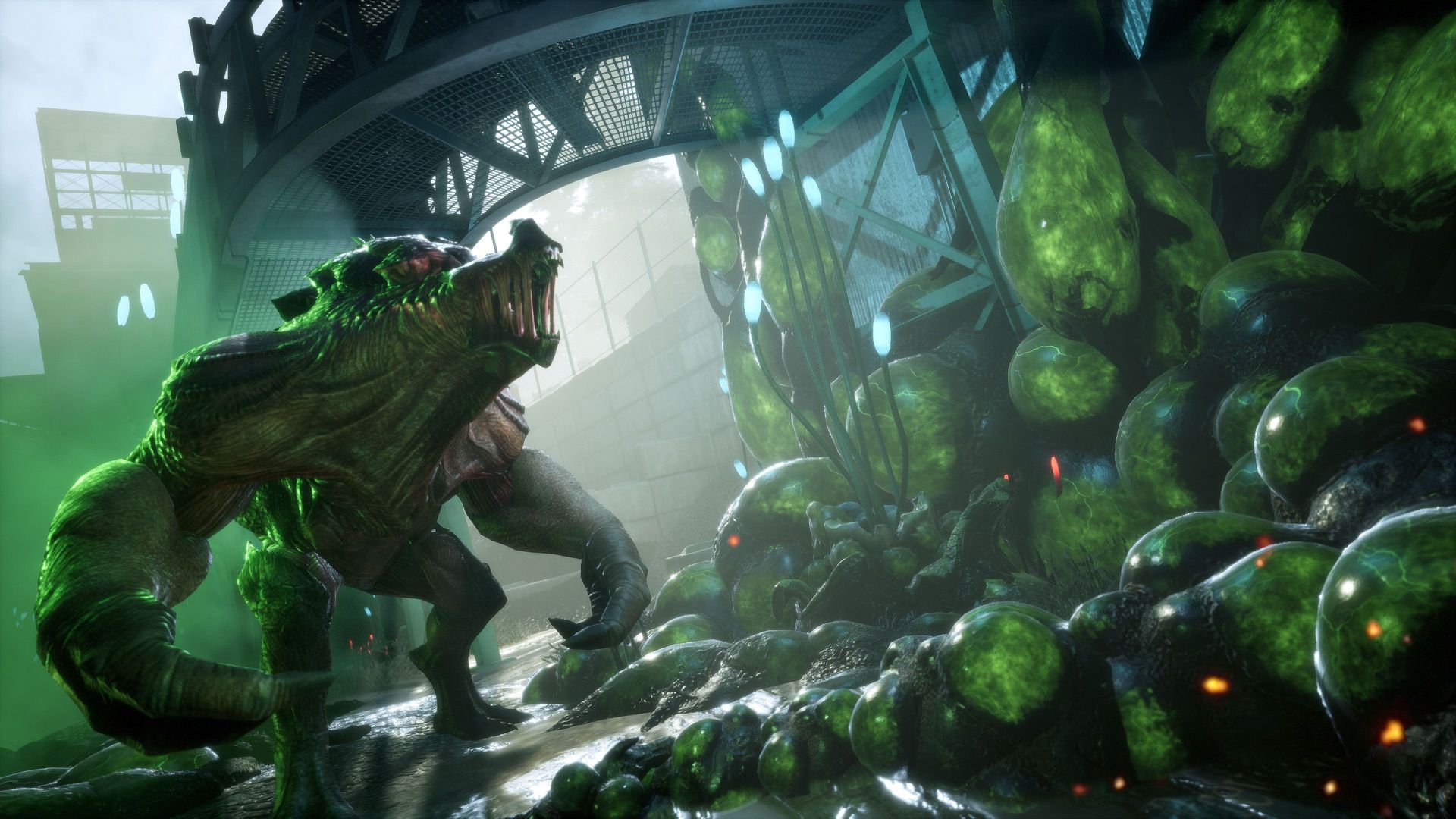 The level design is a bit of a mixed bag. Levels are generally a linear mix of fighting through to new areas, holding out choke points during enemy rushes or map objectives, then doing it all over again. The defense sections is Earthfall at its best. The addition of barricades, automatic turrets, and big mounted guns gives players quite a bit of flexibility on where they want to create a choke point, instead of being stuck with one or two options like Left 4 Dead series. Navigating through levels is a bit tricky. Unless there is an objective explicitly marked in the world, finding the right path forward can be difficult in forested areas and larger interior zones. The game has too few subtle hints to guide the players in the right direction, forcing them to simply memorize the map.

Earthfall is definitely a multiplayer only game. While there is an option to play alone with three bots, the AI is dumb as a door nail. The difficulty of the enemy and the skill level of friendly AI can be set independently. I found the friendly AI had to be set to the highest skill setting to be of any help.

The PC port of Earthfall is solid. The game offers the usual graphic options expected from a proper PC title, including field of view and borderless full screen. The mouse and keyboard controls work well, though there is not option for secondary binds. The controller follows the standard FPS layout and works without issues. 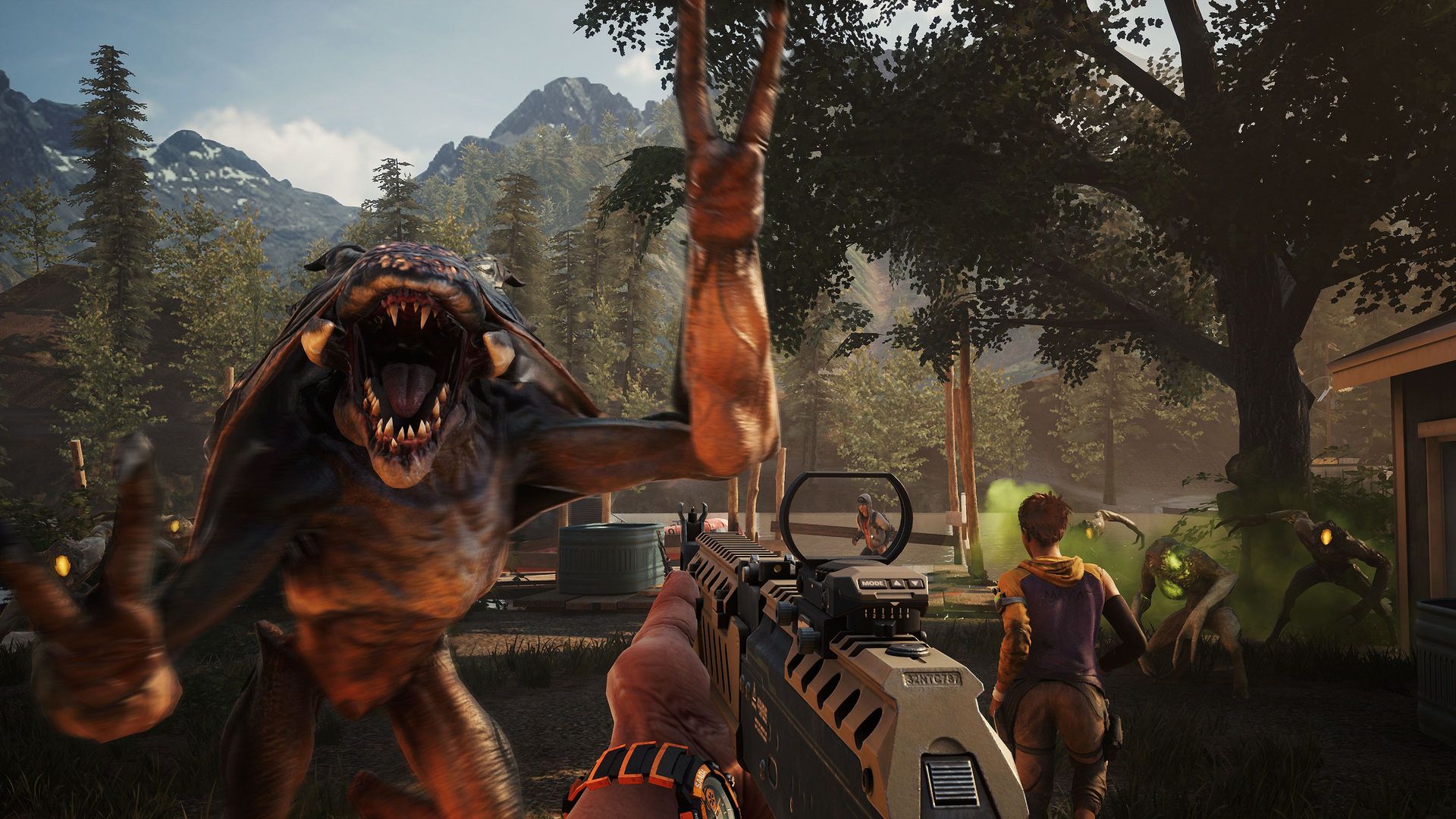 Earthfall’s visuals are excellent. The art direction is realistic with some futuristic notes. The alien design looks great, mixing classic sci-fi with a touch of zombie like behaviour. There are only two major issues with the graphics. The melee animations are awkward looking, and the fire is awful. Compared to the rest of the game, the fire looks like it came out of a title from the early 90s.

Earthfall’s audio experience is poor. The firearm sound effects are too similar and lack any impact. There is very little variety in the music and it rarely follows the mood of the game. Characters will call out that swarms of aliens are coming, but the music doesn’t change at all. The only time the music picks up from the rather depressing tone is when a Beast spawns. To make matters worse, the voice acting is generally mediocre at best. 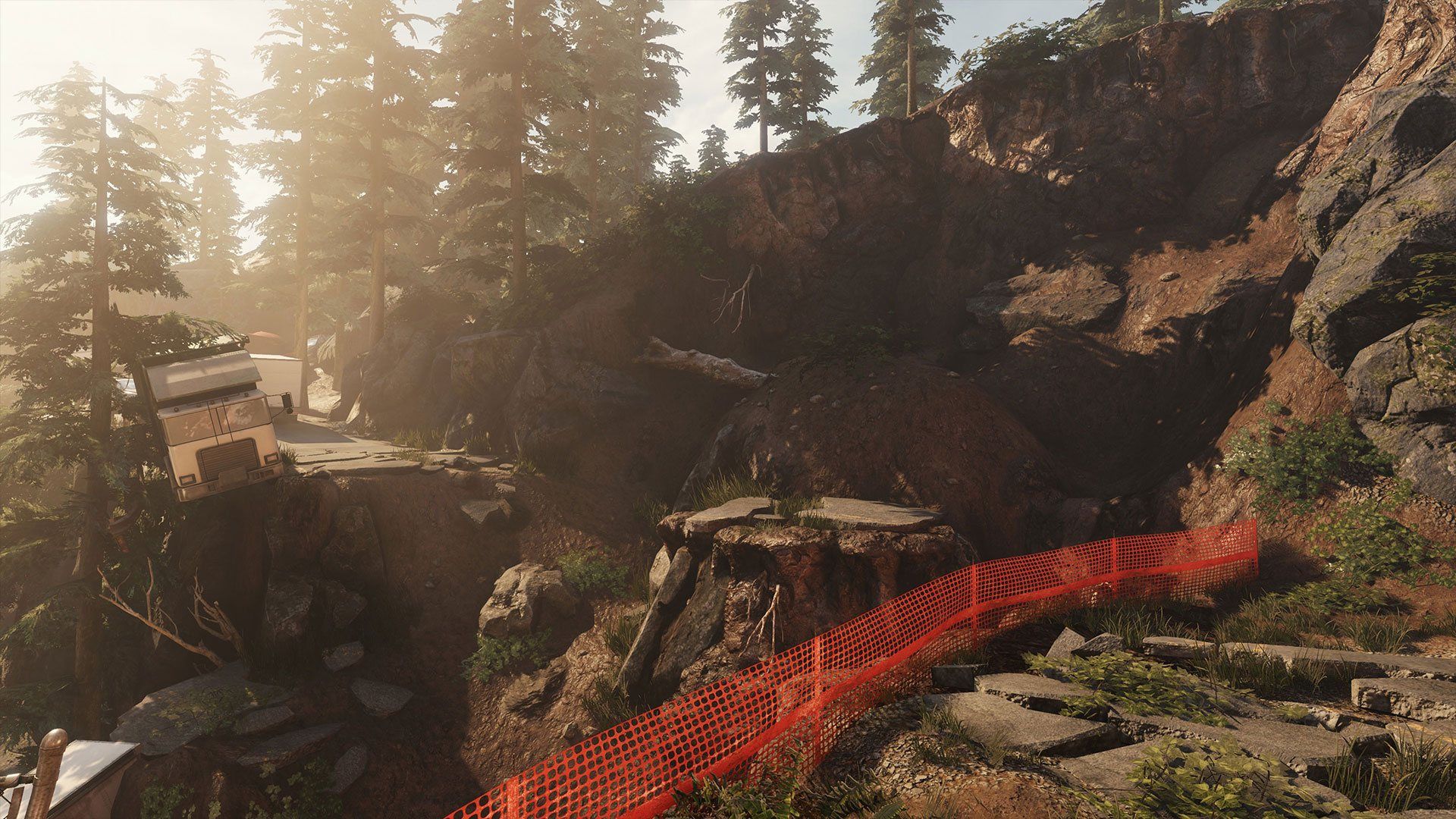 Earthfall modernizes Left 4 Dead series but fails to create a cohesive package that honours the games that inspired Earthfall. While Earthfall excels at defensive holdouts, the poorly designed gunplay hampers the game. The story is rather dull, and the characters are one dimensional. The graphics are excellent for the most part, but the audio experience lacks variety and falls short in quality. Unfortunately, games will have to continue waiting for a true successor to Left 4 Dead 2.

Earthfall attempts to modernize the Left 4 Dead series, but fails due to the lousy gunplay, mediocre level design, and poor audio.
5