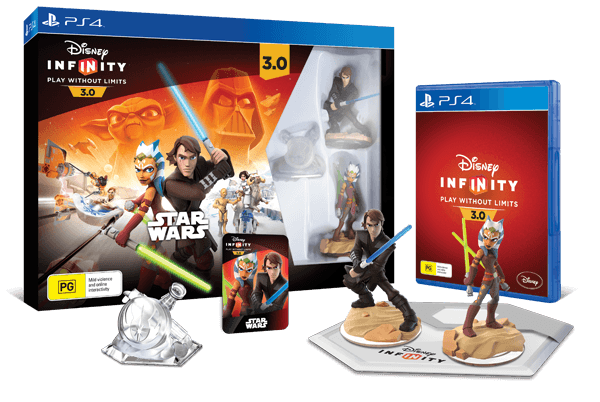 For the past three years, kids (and kits at heart) all across the globe have been putting figures down onto bases, loading up games and letting their imagination run wild on their TV screens. Thanks to Disney Infinity we have been able to have Mr. Incredible and Spider-Man team up against Davy Jones and Loki, or Mike Wazowski frightening Nick Fury. Well it was bound to happen sooner or later, and now Disney have added characters from a long time ago, in a galaxy far, far away to the mix. Disney Infinity is here and in addition to all of the new vehicles, characters and lightsabers, the entire game has been reworked and kicked up to 11 to provide the most fluid, exciting and downright fun Disney Infinity experience to date.

Note: Since the game is sold as both a bundle, and a digital-only stand alone game, we have broken the review into several parts. The part you are reading now is focused on the Starter Pack and Toy Box components that everyone will have access to at launch. For the rest of our reviews, click through below: 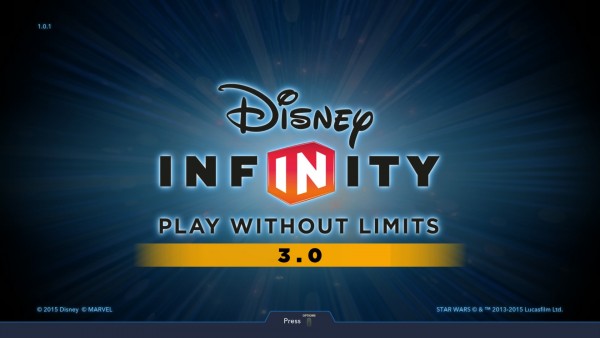 Disney Infinity 3.0 may look like it is all about Star Wars, but really it is about being bigger and better than ever before. All of those features you loved in the previous games have been taken to new levels.

In previous games there was always a pre-built Toy Box for you to kind of run around in and learn the ropes of the game, but there was really not all that much to it. Now, Avalanche have taken it up several notches with the Toy Box Hub. Now not only do you have a pre-built world to explore, but with tutorials, challenges and access to the game’s online, the Hub is definitely the place to be.

Heading into Flynn’s Arcade through the Toy Box Hub will put you in an online lobby where you are able to face off against three random players in competitive challenges.  The downside is that you need four players or else the game wont start. That sadly means that with so few people playing before launch, I didn’t really get to experience too much of this aspect of the game. Although what did happen a lot is that when I went to one of the arcade machines to select which game mode I wanted to play, the game would deposit me into somebody’s world where more often than not, they would be none too happy to find a level twenty Darth Vader suddenly standing in the center of their INterior. That being said, this kind of random dropping made for some absolutely hilarious encounters. 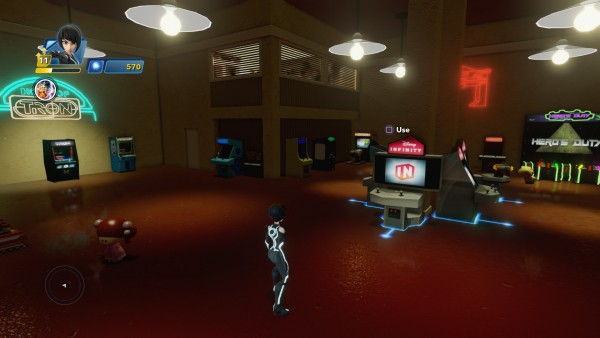 You can equip your sidekicks with a hoe and watering can, which allows them to grow food. This food in turn is used to feed your sidekick so that their skills will improve. There is a kind of Pokémon-esq vibe to the whole thing where you train a select group of sidekicks to best help you out (my team of sidekicks were Dipper and Mabel Pines, Darkwing Duck, Scrooge McDuck, The Mad Hatter and Rapunzel). Growing food is largely a waiting game as your minions rush about the land planting and watering thewir crops. Each time you harvest a fully grown crop you will be awarded with a hat for your sidekicks to wear which increases the chance of finding more of that crop. I found that if you plant more of the crop you just found, you will move up the rarity chain, starting at things like Carrot and Sunflowers until you are growing things like Pumba’s Grubs and Mickey’s Ice Pops. It is an exciting experience to see a surprise new crop type in amongst what you have planted, and then waiting for it to grow so you can harvest it. As I’m writing this, I realise that Disney have tricked me into playing Farmville on my PS4… damn… 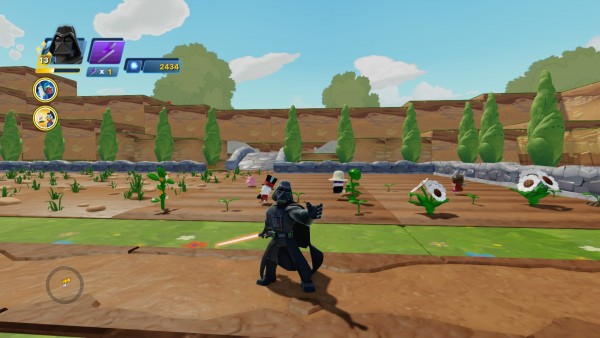 Disney Infinity is a franchise that despite its colourful exterior has always really been about the combat. You fight enemy characters, you fight bosses, you fight other players! So it has always been a shame that the combat, while fun, has always been a little on the clunky side. Well thanks to Ninja Theory, all of that is a thing of the past. The combat engine has been completely reworked and the results are clear from the moment you start playing. While simple button press combos are still present, the developers have added a new combo system where if you press your attack buttons in specific strings, you will unleash devastating, flourished combos that can absolutely obliterate anything in your path. These combos are relatively easy to learn too, especially because they are accompanied by a visual cue – when your lightsaber flares (or other equipped weapon sparkles), hit the attack button again to continue the combo. Mastering these combos takes a little more time but is very doable, and once you do you will feel like a real Jedi Master.

This improvement to combat could not have come at a better time, because frankly Jedi need to feel like elegant dancers in how they move and fight, and the developers have managed to pull off this feeling perfectly. Even just watching some of the Jedi’s combos will have you awestruck at just how impressive they look. Characters move like they do in the films (or animated shows) and

No matter which game you had or which platform it was on, Disney Infinity is a franchise that has always been riddled with performance issues. It is no surprise considering the incredible scope of the games themselves, but none the less they have been a consistant burden in players everywhere. Well, I am oh so happy to report that like most other parts of the game, the performance has undergone a serious improvement. Loading times have been cut by more than half compared to 2.0 and the random glitches, bugs, lag and framerate issues have largely been done away with. Now that isn’t to say that the game runs perfectly as is; there are still more than a couple of bugs that players are likely to encounter but they are minor and far more infrequent than previous titles. 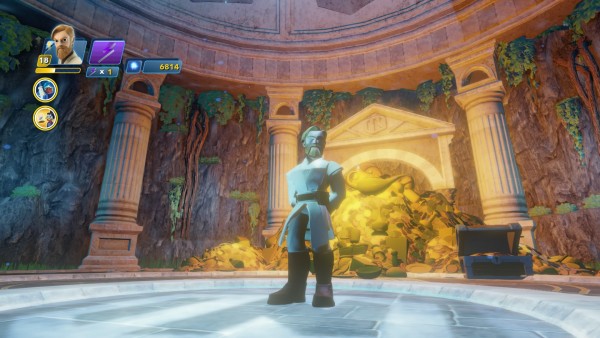 Disney Infinity has an art style that is unique unto itself, managing to blend the unique properties of all of its included franchises, mix it with a bit of its own and cover it with a splash of cartoony colour that manages to hold the whole package together perfectly.

While I was playing, someone commented to me that they felt the visuals of this game were not up to par with what you would expect from a current-generation console game. Now from a technical standpoint I can see that it would be nearly impossible for the game to run higher-resolution textures than it does. The sheer scope of the game means that it would likely crumble under its own weight if it did so (compare this to Minecraft which runs low-resolution visuals for a similar reason) However, on a purely subjective note; I like the art style of Disney Infinity, I always have. The bright cartoony colours, the fact that every character and every represented franchise has its unique and defining traits maintained while all still feeling uniform; to me it all just works.

Sadly though, the visuals are not perfect. On more than one occasion, several textures would flicker and disappear completely. These are minor in the grand scheme of things, but they also can’t be overlooked 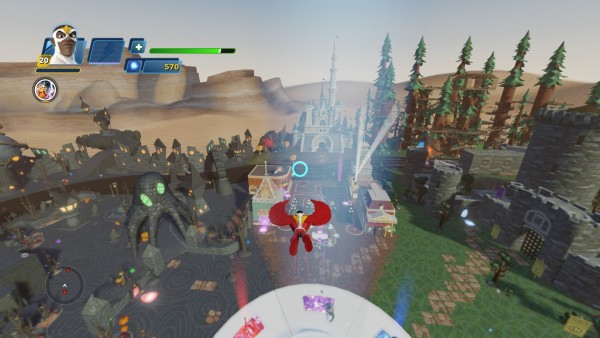 The Disney Infinity franchise has always been about recreating that feeling of free play you had when you were a child. When you had your Lego Minifigs battling against your Iron Man action figure. It didn’t need to make sense back then because it was just imaginative fun. Well, after playing these games for three years, I feel that the intended spirit has finally been captured and honestly I did feel like a kid again, having Obi-Wan Kenobi standing side by side with Captain America or Buzz Lightyear going toe-to-toe with Darth Vader – it really is the type of experience that you can’t get anywhere else in video gaming.

While the theme of Disney Infinity 3.0 is Star Wars, it could also be called Disney Infinity 3.0: Bigger and Better, because that’s what it is. Elements and mechanics that were introduced in previous games have been expanded upon to incredible levels, and the nagging technical issues that plagued the game have been largely done away with. Slick combat, more advanced building tools and a new Toy Box hub that makes world creation feel a bit less daunting all combine to create the best Disney Infinity experience to date.