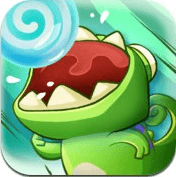 CandyMeleon is a casual based skill game featuring bright kid-friendly graphics. Players take control of our reptilian hero as he attempts to eat as many candies as possible.

CandyMeleon has no story. There are no explanations on why a creature that normally feasts on insects has suddenly grown a taste for sugary treats or why coins are falling out of him. You will have to fill in the blanks yourself. 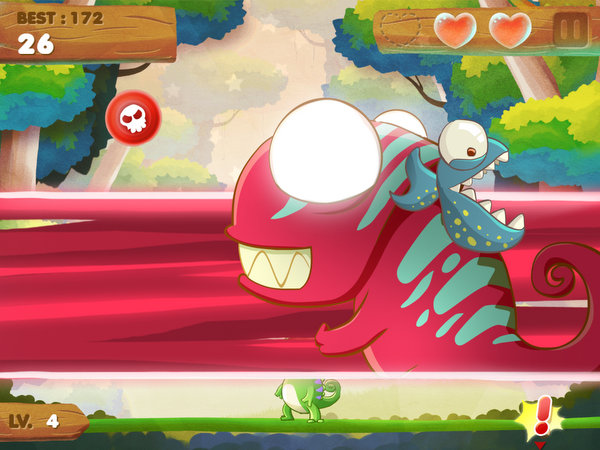 The game uses either the accelerometer or the touch screen controls to move our candy addicted chameleon back and forth to catch candies being fired in an arc from the left side of the screen. Players can either catch candies as they fall or fire out their tongue to snag the candy in mid-air. The snap decision on how to catch the candy becomes an important mechanic in handling the obstacles thrown at the player during game play.

The early levels start with simple obstacles like piranhas that will injure the player and progressively more challenging like spiders that will capture the chameleon’s tongue and any nearby by candies, leaving the player vulnerable to damage. Players can withstand three hits before the game is over. Every single candy dropped onto the ground will penalize the player two points from their final score. On the other hand, there are an assortment of special candies and outfits for the hero to help rack up high scores. Variety is the spice of life they say and it is exactly what makes CandyMeleon so interesting. 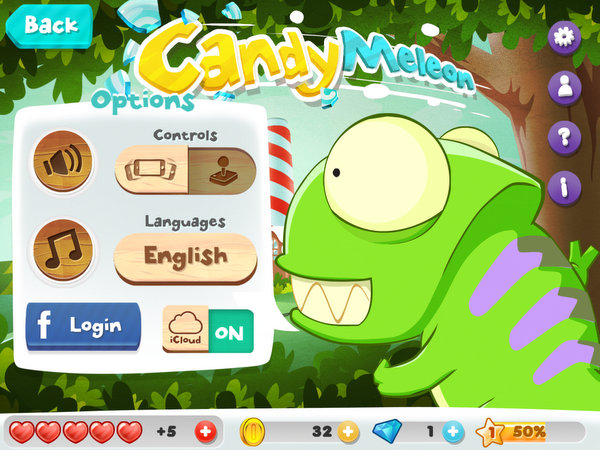 CandyMeleon is a dead simple game that nails the perfect balance on many levels. The game is simple to pick up but gets progressively more challenging. It also does an excellent job balancing the free to play aspects with encouraging purchases in a positive manner. The player can play five attempts, with attempts being refilled every eight minutes or five more attempts purchased for five diamonds. Diamonds can be earned for free in multiple ways. They are awarded on levelling up, provided after a certain period of time elapses, and given in exchange for watching a short advertisement. Unlimited attempts can be purchased for $4.99 USD. Playing casually, I never needed more than the allotted hearts. However, those want to play uninterrupted can simply hand over the five dollars and be done with it. The ads are unobtrusive, the odd advertisement for other BulkyPix titles appear as a small banner on the top of the screen or as an occasional pop-up. 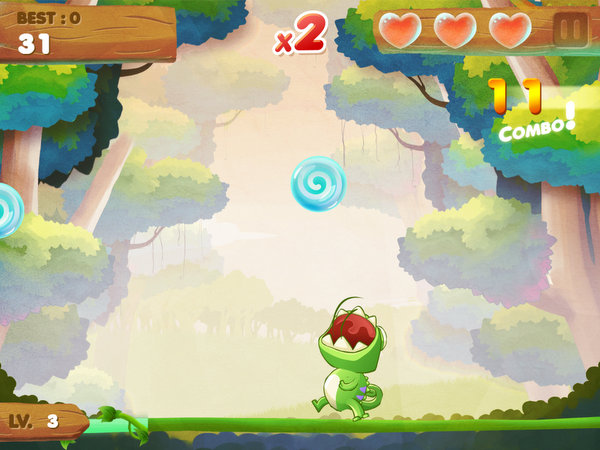 CandyMeleon is very bright, leaning heavily on a vibrant palette of colours to catch the eye. The graphics are extremely kid friendly without being unappealing to more mature tastes. The game runs smoothly with no frame drops or slowdowns. The graphics on the iPad Retina display are sharp. The UI is excellent and manages to work itself into the gameplay. The only quibble I have with the UI is the fact I would have preferred the piranha warnings on the bottom of the screen to be larger and more noticeable on the iPad as the eyes tend to be directed to the top half of the scree on the larger iPads.

CandyMeleon has catch music and sound effects that are excellent to listen to for short bursts. Due to the lack of musical variety, things may get a little tiring during long marathons. This game does not rely on audio cues and can be played with or without sound. 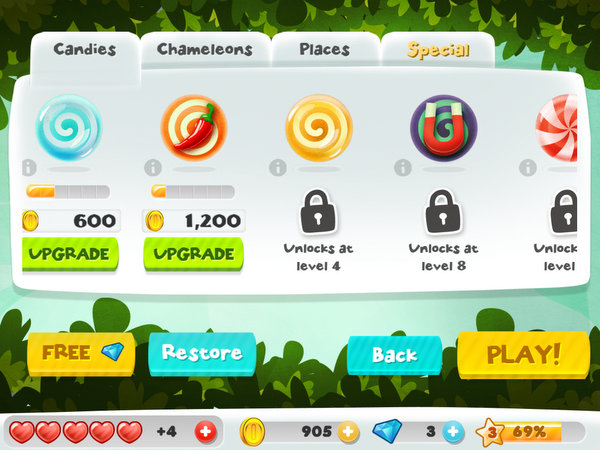 CandyMeleon has all the right attributes for an instantly addictive game that is family friendly. Simple pick up and play mechanics will keep the little ones interested while still being complicated to addict older players. The in app purchase scheme is an excellent example of how free games should be done. The excellent audio and visual experience mixed with solid gameplay make for a fantastic game.