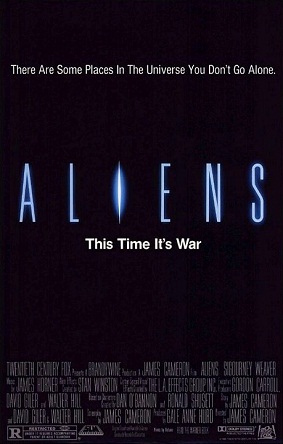 In the interest of transparency – Aliens is my favourite movie, hands down, and I could not be more excited to see it on the big screen, just as it had originally aired 30 years ago. Or at least, not quite as it originally had. In The House treated us to the Director’s cut edition: Aliens as it was meant to be seen, as the director intended, in all it’s glory. I’ve seen it more times than I can count, and so it was with mounting excitement I made my way down to George Street Cinemas for the In The House screening. One of the many jewels in director James Cameron’s crown, Aliens was initially received with critical acclaim, and to this day is still able to stand on its own laurels against modern cinema offerings. 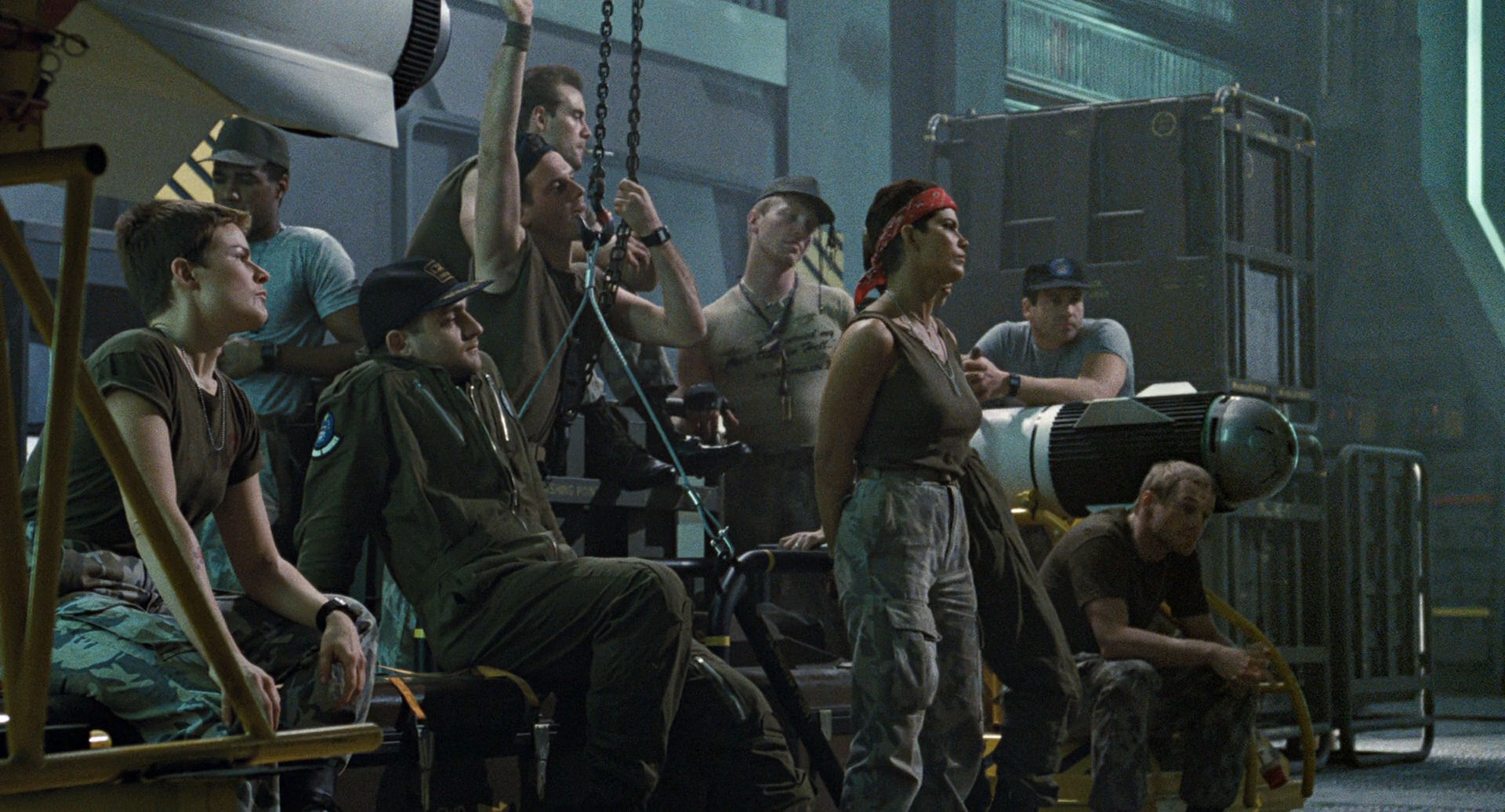 As is traditional David ‘Quinny’ Quinn and Jason ‘Jabba’ Davis presided over the viewing, sharing with us tidbits about the movie’s development, and prizes for the keen individuals who arrived in costume as Colonial Marines. For example, Sigourney Weaver, an anti-gun lobbyist, was quite unhappy to learn she’d be using one during the movie. Luckily for the movie however, she relented. Other cool facts: the ‘smartguns’ used by Vasquez and Drake were WW2 German MG42s, with motorcycle parts slapped on and carried on a camera gimbal. The creepy alien hive? Made out of melted black garbage bags and an old power station. However before the screening could begin, we the audience were a part of a mannequin challenge. This was new to me, but it did get me thinking of those creepy androids in Alien: Isolation, which in a dark cinema, right before watching the action/horror hybrid film that inspired that terrifying game, felt appropriate.

Aliens opens with Lt. Ellen Ripley being rescued by scavengers and waking up at Gateway Station – a massive transit hub built above Earth – 50 years after the events of the first film. After a kangaroo tribunal fails to believe her talk of alien creatures, she’s fired and reduced to working on a loading dock. Which is when Carter Burke, a representative of the company they both work for, Weyland-Yutani, finds her and offers her a job: travel back to LV-426 and investigate what’s happened to their colony there, suddenly gone silent. After her recurring nightmare of chestbursting-horrors convinces her to go, we cut to the USS Sulaco on final approach to the ill-fated planetoid. 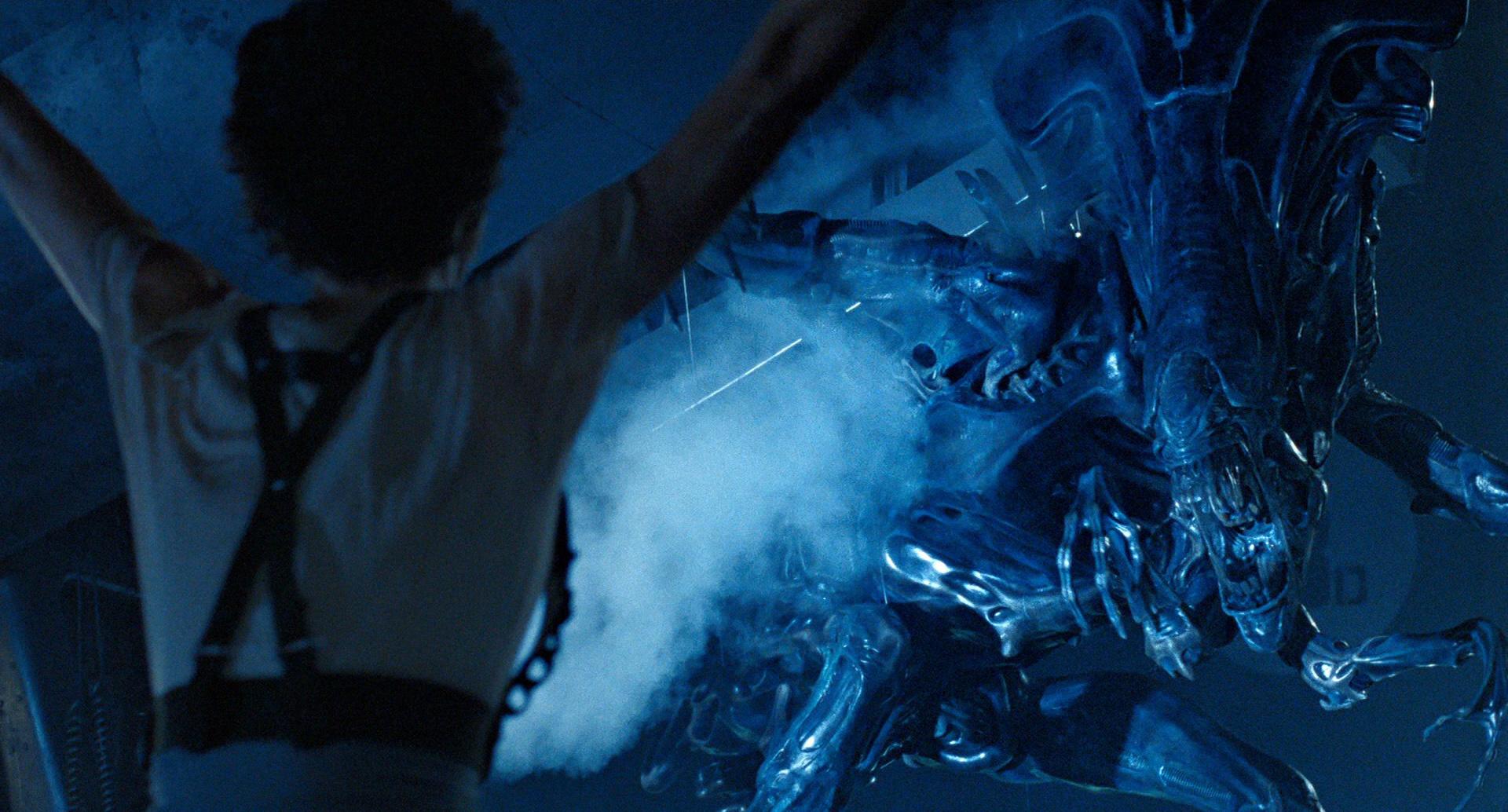 A cryo-tube wake-up scene reminiscent of the first film is our first introduction to the United States Colonial Marines who are supporting Ripley and Burke on this mission of investigation. Their preparations for the upcoming drop are awash with self-assured jingoism, testosterone and back-slapping camaraderie, in stark contrast to the bored professionalism and griping of the Nostromo’s crew. These early sequences serve as an excellent introduction to the respected Sergeant Apone, the green Lieutenant Gorman, and their family of belligerent children. Even Ripley lends a hand with a cargo loading exoskeleton, featuring in a happy, if bloodthirsty, little family montage. However once the party is on it’s way the first signs of nerves appear: Gorman revealing this was only his second combat drop, Hudson’s bravado when describing their arsenal (“we got nukes, we got knives, sharp sticks…”), and the marine’s general distrust of their corporate escort and brand shiny new commanding officer. 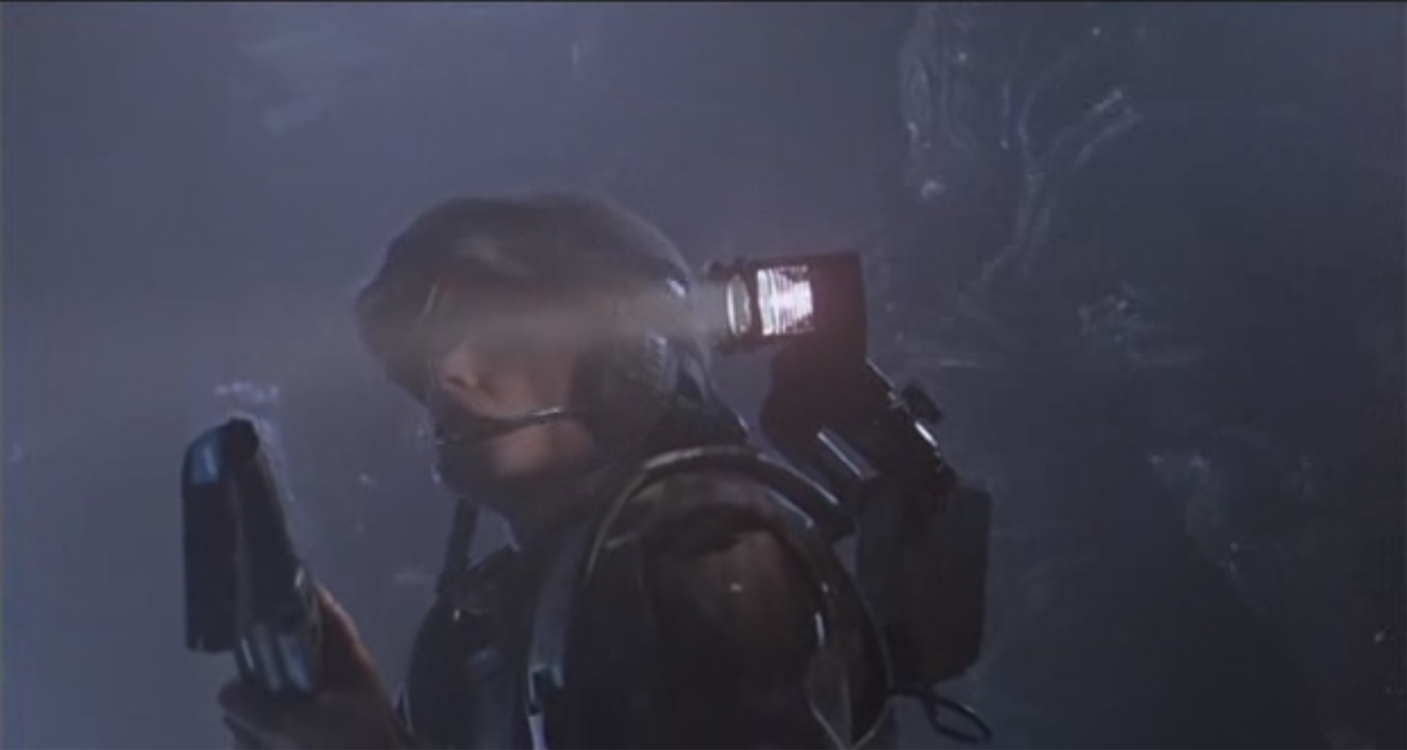 Making their way inside the abandoned colony, the marines discover Newt, a survivor of what happened to the human colonists, and the daughter of the person to find the facehuggers in the downed alien ship earlier discovered by the Nostromo’s crew. Finding no other survivors, and with signs of small arms fire and explosives damage everywhere, not to mention the melted walls and floors, the marines regroup and set about discovering what they can. Burke and Hudson soon find signs of the colonists all mysteriously gathered under a cooling tower of the colony’s neighboring terraforming device and fusion reactor. Making their way under the reactor, Gorman’s incompetence and Burke’s greed make themselves felt as the movie abruptly and violently changes pace. This sudden and brutal shift from confident bravado to what ends in Hudson’s iconic line “Game over man. Game over!” is one of my favourite parts of the movie, turning all expectations on their head. 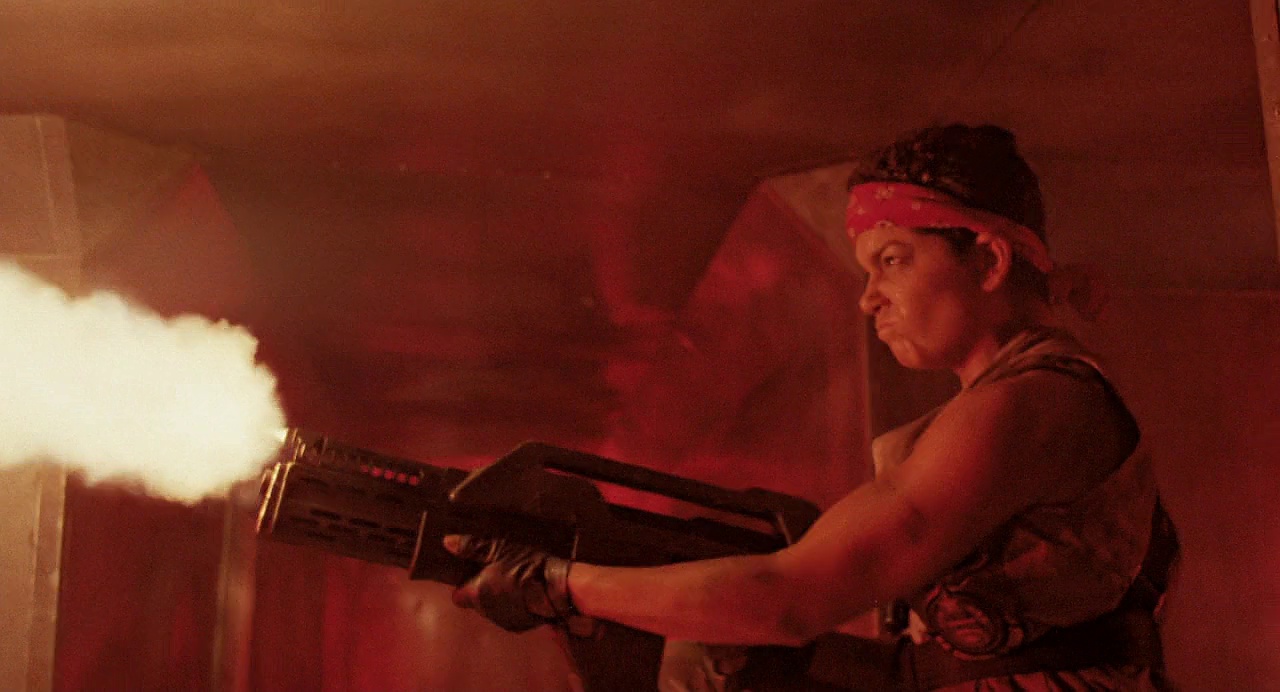 From here the story is a tense struggle for survival. Every preparation and defense feels like it just might work, but slowly the survivors are attrited down. Several false endings happen, keeping the tension tight and visceral right to when the credits start to roll. The feelings of optimism and safety the first half evokes are nothing but distant memories by the time you walk out of the cinema, feeling as raggedy edged and drawn out as the characters do. While the horror is present several jump scares, this is not where the majority of the tension comes from, instead evoked through the creepy music, the dark and industrial sets, and the distant inexorable approach of death.

The actors all provide excellent performances, reacting believably to their unbelievable straits. While Carrie Henn’s (Newt) lack of acting experience is at times painfully obvious, the rest of the cast does a stellar job. Lance Henrikson plays the unflappable and resourceful android Bishop, giving a performance not quite as human as Ian Holm’s Ash (Alien), but much more believably synthetic. Bill Paxton’s (Hudson) panic is visceral, and his comedic leanings provides a contrast to stop the tension being unbearable, but not enough to break it. Paul Reiser as well does an excellent job as Burke, the slimy corporate slug. 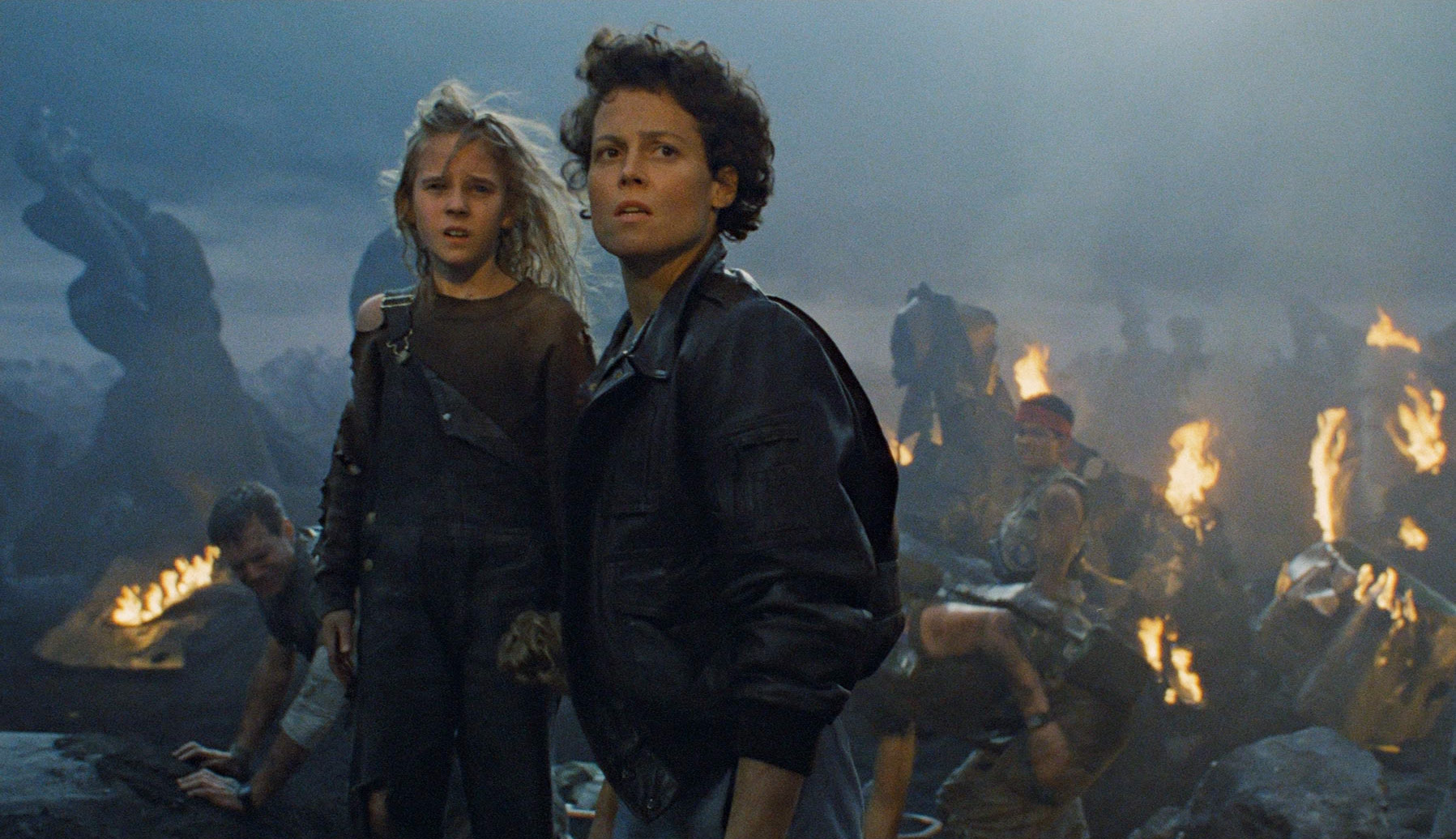 The visual direction follows the designs laid out in Alien, with a dirty industrial aesthetic defining the human constructs. The colony looks lived in, the military ship spartan, and Gateway Station’s sterile white aesthetic is laughably broken up by what one can only imagine was a corporation’s attempt to do the minimal necessary to make it’s employees comfortable. The props receive similar treatments, the addition of scrap metal making what should be familiar weapons seem futuristic, while maintaining their sense of utilitarianism. The alien hive is also impressively detailed, and a very believably creepy transplant of the organic into the mechanical. Not every visual effect survived the decades however. Scenes involving the dropship flying appear puppet-like, and the same shot of a xenomorph exploding is used time and time again.

The design of the xenomorph is the same as in the first film, their sleek, black, armored exoskeletons and extraordinary speed and agility making them a terrifying foe. However, no mention of Aliens can be complete however without mention of the Alien Queen – a massive 4 meter high construct that took 18 puppeteers to manipulate. All the horrifying organic efficiency of her children writ large, the Queen is an awe inspiring sight, dominating the spaces she’s in, and moving with a grace that belies her size. Throughout the dark and cramped confines of Hadley’s Hope the attention to detail is impressive, and the close shots and tight focus of the camera keep the atmosphere tense – even before the aliens make an appearance. 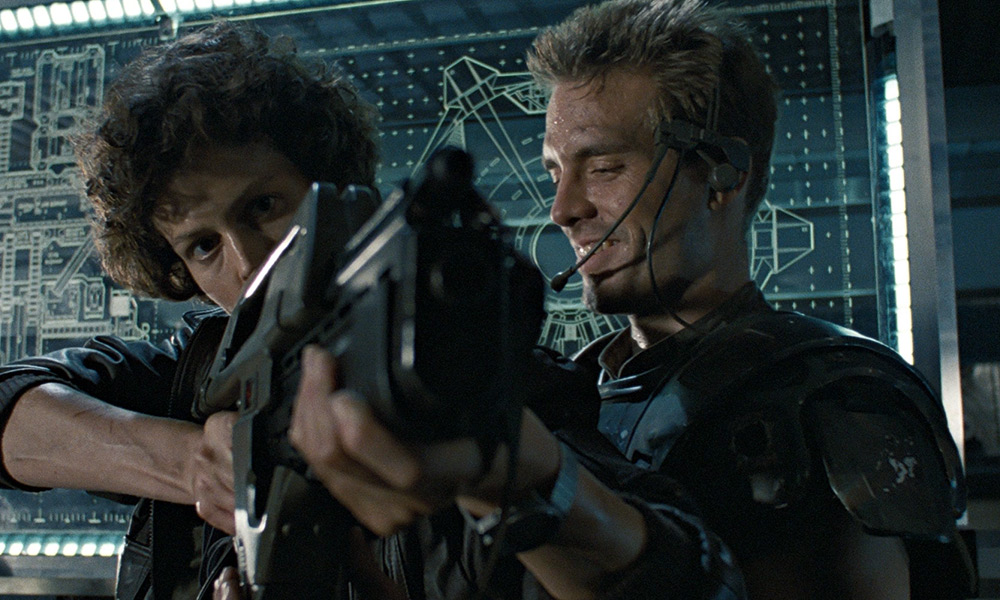 Featuring not just iconic images, but iconic sounds as well, Aliens makes masterful use of diegetic sound to sustain the tension. While the wailing strings of the orchestral score serve to creepily announce the presence of the xenomorphs, it is the soft pinging of the marine’s motion trackers that really puts the audience on edge. Hearing unseen threats hone in on the tiny screen, while outwardly all is peaceful serve to leave the audience on the edge of their seats, even if the crescendos and silences of the score were not enough on their own.

Aliens is not just a worthy successor to Alien, serving to expand upon the original world building, while keeping the same vision intact. It’s a masterwork piece of cinema that surpasses the original that birthed it. Featuring all of the original’s attention to detail, with gorgeous practical effects and an exquisite score, it’s the film’s characters and world building that really makes it strike home. Arguably having an even larger effect on popular culture than it’s predecessor, Aliens presents a cynical take on humanity’s future and with a slew of iconic moments wraps it up into the perhaps the best sci-fi, horror or action movie of all time. Many thanks to the folks at In the House for screening this!

For other films which In the House are screening, check out their schedule here.

A classic that still holds up today, Aliens is an incredibly tense sci-fi action flick with a massive and justified impact on popular culture.
9