Curse of the Dead Gods

Money. Wealth. Fame. The basic earthly needs that drive us forward in life. Well, for our protagonist of Curse of the Dead Gods, such goals got him in a load of trouble. His quest for the untold riches got him to an accursed temple, filled with deadly traps and monsters. Oh and curses as well (can’t have an accursed temple without some). Technically, everything you seek for is already there, you just need to get to it – alive.

Curse of the Dead Gods is a bleak and depressing version of Torchlight with some Darkest Dungeon vibe thrown into the mix. The story is minimalistic and at this point, it feels like a design choice which I doubt will change even once the game is out of early access. And that’s not a bad thing at all. There is a certain allure in the game without handholding that’s based on the trial and error approach and that’s where Curse of the Dead Gods truly shines. The first time you will encounter some gameplay mechanics that will take time to master and the most useful tutorial in the game (for me, at least) only appeared after I died.

You find yourself in a poorly lit temple, with only a torch and some basic weapons. You try to find your way out of this maze, before stumbling upon a map forcing you to select your next path in the neverending labyrinth. My first forage deeper into the temple did not go well. This game pulls no punches regarding its difficulty. Mobs of enemies won’t just dumbly stand around while one of the attacks you. Oh no. They’re quick, aggressive and coordinated. sometimes your only choice is to utilize the roll button and lure them into traps to chip away some of their health. With that said, I didn’t get further than a second floor but it was all a lesson. Despite being in early access, Curse of the Dead Gods is far more polished than most of the other indie roguelikes in that bunch (not that the selection is great, but still). My second run taught me how to utilize some advanced combos (such as precision shooting, charge attacks and combos) so I ventured a bit further this time around. Only on my third run, I discovered the sacred roll button. It’s something that will be your trusty companion and a lifesaver as you zig-zag through the mobs of the undead. With proper timing, you can completely avoid the attack and counter with your own. I ended my run with a bigger selection of bows, swords, and guns. And that’s the beauty of this game. You don’t get stronger with each play, you just get better at playing and don’t hide behind the stats. It’s an unforgiving roguelike that will keep you coming back for more.

As for the visuals, the game boasts a simple yet effective cell shading approach. The lightning is well done and that’s understandable since most of the game revolves around explorations so the corridors can be anything except boring (and without loot). The music is nothing to write about but at this stage, I can’t expect every aspect of the game to impress me. One impressive bit is that in my playtime of a couple of hours, I have yet to encounter a single major bug (take notes, Bethesda!) or a crash. Besides some incorrect hitboxes and enemies teleporting faster than usual, there was nothing on technical side that could impact my game sessions. Another bonus point goes to the incredibly low requirements for the game and buttery smooth optimization. As of right now, Passtech Games team has an extensive roadmap for the game with more traps, blessings, curses, and weapons to be added. While the game launched with a decent amount of content, it’s only a sample of bigger and better things to come.

In any case, if you’re looking for an engaging roguelike to play, floors to ravage, gold to salvage and enemies to die from – look no further. Even at this stage, Curse of the Dead Gods has enough to entice you for a purchase. At the core of the game lies an addictive gameplay loop that is a foundation for every successful RPG, roguelike or a platformer. We’re currently in a slow season regarding game releases so if you’re looking for something engaging to fill this month of March, this should be your pick. If at any point you get stuck or don’t know what strategy to use, you can always jump into the friendly Discord server of the game and ask for advice from the professionals (aka people that played way more than you). Who knows, you might find yourself sticking around for more than that in this game. 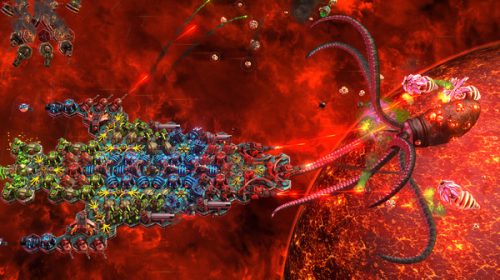