Sorry if you were expecting a misleading, sensationalized headline that would pull you in more, but there is a reason for that and we will touch up on it in a moment. First, we need to go back a bit. Thirty years ago, ABC introduced audiences across the country to Roseanne, a sitcom focusing on a blue collar family living in Lanford, Illinois – right in the center of the United States. Roseanne followed Roseanne and Dan Conner as they raised their three children in a low budget world. While the premise of the sitcom had been done before, we had never seen a female lead in such a strong position on television. For the first time, the husband was simply the chipper spouse, and the wife was the lead, holding down the ship and doing everything necessary for general survival in a society that simply favored those with a larger bankroll. 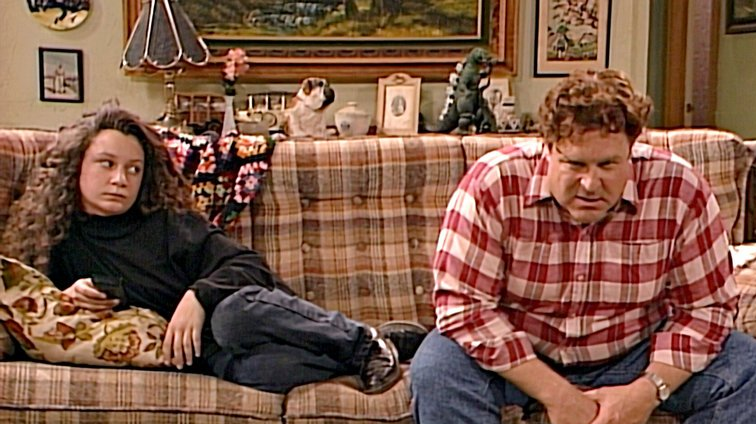 Roseanne was able to not only get hard-working mothers to watch every week, but also show kids that they were not alone in the struggle of simply growing up. It was a show that taught us important lessons such as acceptance, understanding, and most of all – perseverance. Personally, as someone who grew up in a similar financial situation, I think this little show made it feel normal for myself to see these situations unfold on television. You know, kids trying alcohol, parents using foul language, drugs, sex, and so on? That thing called reality. Never had it felt more real, and that is what made Roseanne special. No matter how complicated or shitty the Conner family had it, they still managed to make us laugh, cry, and stand silent as we related to their joy and pain. As I have said before in prior pieces about Roseanne, it was smart television that could appeal to the lowest common denominator without sacrificing its intelligence. There really is no other way to put it in my eyes. 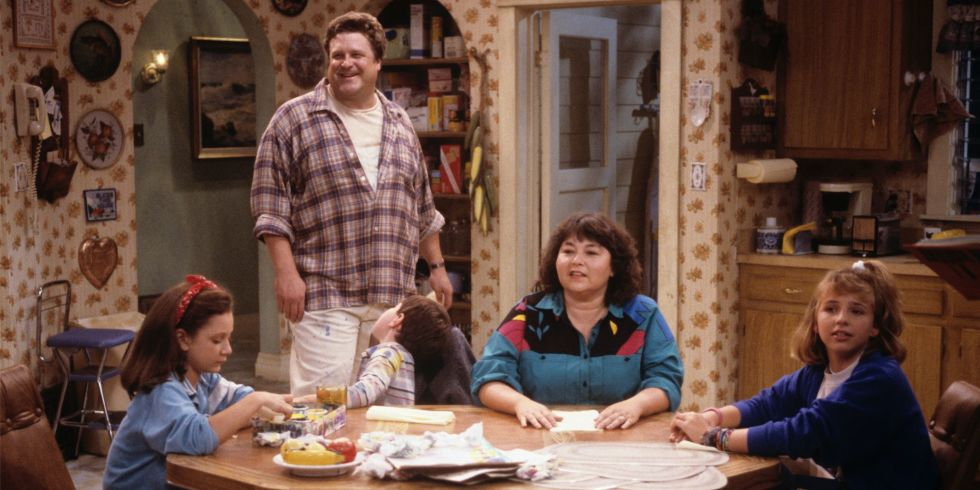 Fast forward nearly thirty years later and we hear rumblings of a reboot. I immediately was extremely against it. I know, it is just a sitcom, blah blah. After seeing Fuller House lean on its past and Girl Meets World literally shove past characters in just for an audible hurrah however, I did not want this show touched touched. I do not care what anyone thinks, Roseanne had one of the most eloquent and meaningful endings in television history. I spoke about it here in the past, and I will always defend it. Erasing that to bring Dan back from the dead and push this ensemble back onto television just did not seem like a good idea. I finally started to accept the idea of it all like most of the audience, and then I found out that not only is Dan back, but Roseanne – the same damn woman who had the first same-sex kiss on screen in a primetime sitcom, the same woman who redefined the television mother with her wit and vulgarity, was now a Trump supporter. 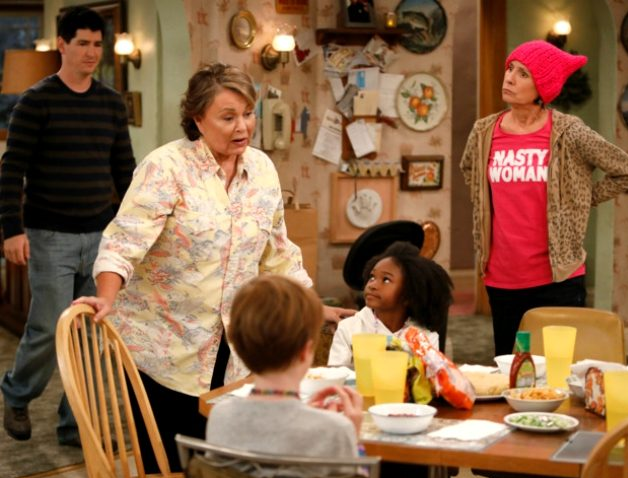 I do not hide it. I am a liberal, or at least left leaning on most issues. I dislike Donald Trump, I dislike his decisions, dishonesty, and lack of intellect, and I dislike every single thing he stands for, including the whole pop culture persona we knew years before, when he was just a mogul who had a catchphrase. To see someone who ended their sitcom with such a strong statement about self-worth now sell out to such simple ideals hurt my own image of her, until I actually saw Roseanne speak about why she made the decision. Without pulling up the quote, she stated that she did this to show that we can absolutely disagree with our family members and still love them. That we can have different views and stand behind them, and still gather around like we always did before and laugh. I kind of got silent after that, and got a bit excited. That is the Roseanne I knew. The one I grew up watching. Despite the fact that I do not agree with her real life persona on Twitter (which while still very much Roseanne, has definitely been confusing to follow with some of the out-there theories and ramblings), I still felt connected to her writing style and wit that she so boldly applied long ago.

So then the show premieres, I wait to watch it a day later as I utilize a streaming service, and I see terrible reviews.

“WHY YOU SHOULD NOT WATCH ROSEANNE”, or “I LAUGHED AT ROSEANNE BUT I WILL NOT BE TUNING IT AGAIN”. I also see articles like “TRUMP’S AMERICA WELCOMES ROSEANNE BACK” and “MAKING TELEVISION GREAT AGAIN!”

I sighed a bit. I mean, this was expected as half of the promotion for this reboot was laced in political chatter. I also see a screenshot of Jackie in a “Nasty Woman” tank top with a vagina hat. I remember just staring at the screen when I saw that, and questioning if I was going to tune in at all. I mean, if I want to see such strong political fighting, I can just go to Facebook. From early perception, it was like Roseanne was inserting all of her current views into her character and poking fun at the side she did not favor at the sake of her family’s expense. Honestly, it looked stupid and made me cringe a bit, but I finally sat down and gave it a chance – and it was wonderful. 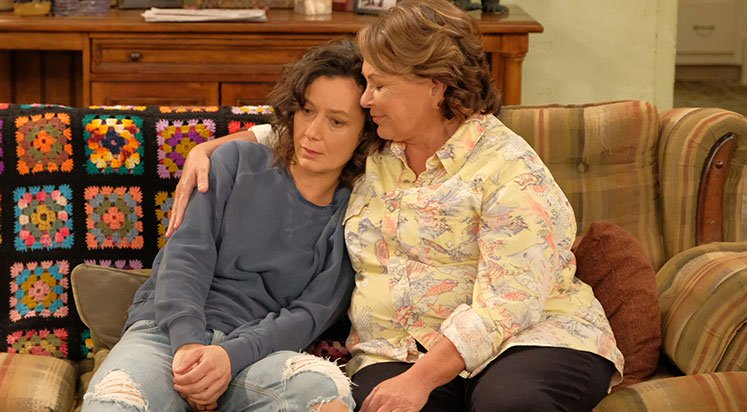 The reboot of Roseanne literally handles the end of the original show with quick finesse, adding simplistic explanations for all of the “but how” statements, and manages to feel like we, as the audience are just watching a brand new episode. It literally feels as if the show never left the air, and that is something I have never seen a reboot accomplish so fast. The set is the same (although a bit brighter), the characters are the same (yet more aged and worn), but the charm is there. That strong message of both independence and togetherness still keeps this sitcom centered, while introducing us to new characters that do nothing but add new material for us to chew on all of these years later. The first episode in the one hour premiere does focus a lot on politics. This must have been the screener that the press received and exploded over, as Jackie and Roseanne start the reboot at odds, holding past grudges because of the 2016 election. With that however we learn that Roseanne is mainly just stubborn, unable to speak for her choices as she made her decision out of disgust for the opposite candidate, and Jackie seems to have taken to the left simply to rebel against her sister. You can translate it any other way, but that is how I saw it, and it worked. 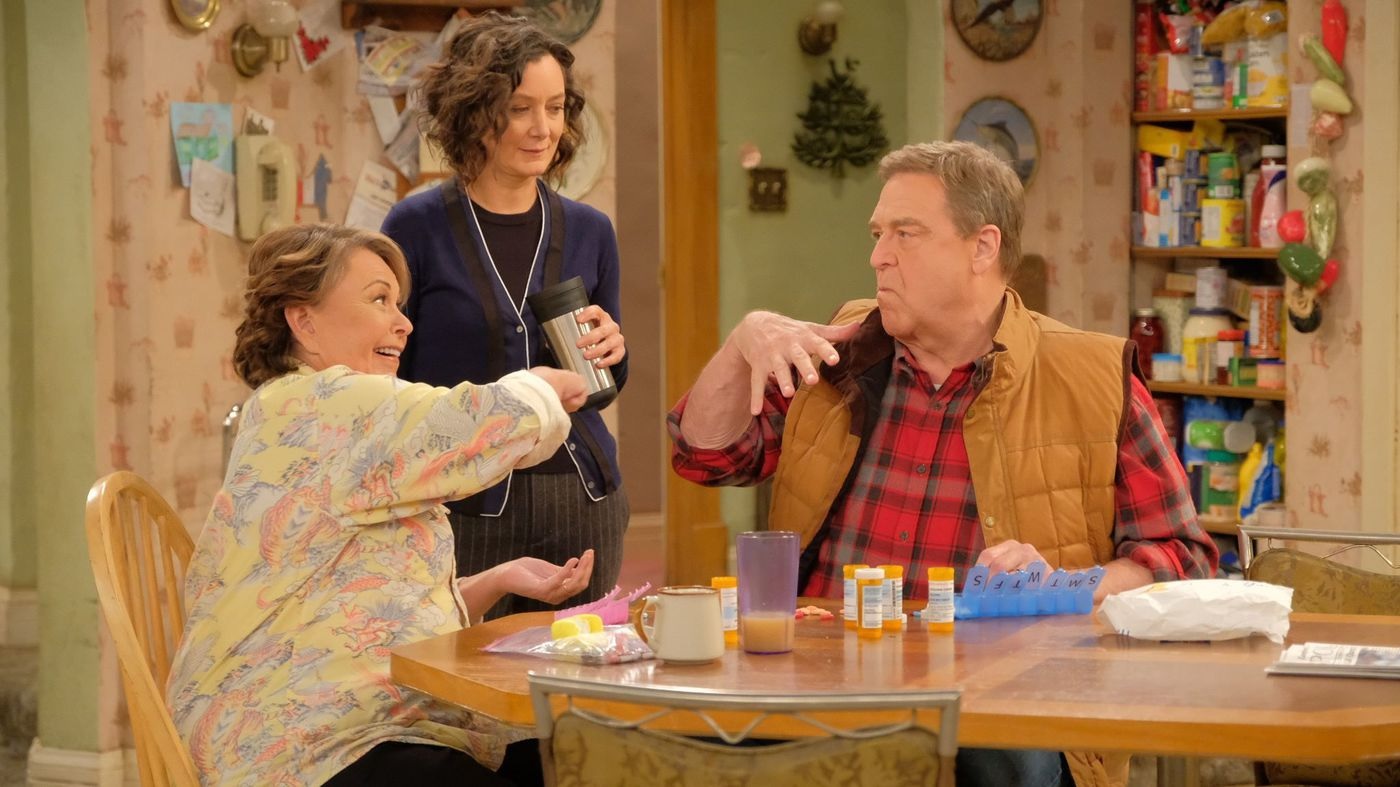 Those overtones just complimented the same exact chemistry we had seen in the past with Roseanne and Jackie, and if you focused on the political messages too hard, you were not getting any of the entertainment that the family as a whole expel throughout. My own side that I voted with has painted Roseanne out to be some sort of new age, Trump-supporting Nazi sympathizer, and has now dug up random quotes and controversies in order to attempt to bury her successful return because they are suddenly upset that this large figure is poking fun of them. On the other side, those who fall right are acting like Roseanne is suddenly a goddess for conservatives, painting her as this right-wing woman who stands up to those nasty liberals. For my friends on the left, if you watched the past show and not just clips on Buzzfeed, you will know that while her character made a choice in the election – her values are mostly still intact and are visible in plain sight, inside and beyond her own character. Based off the first two episodes, her same ideals, intelligence, and wit are coated with her crazy and loud exterior and continue to be the very fabric that makes Roseanne such a fascinating and relatable character.

For those on the right, did you even watch past the first scene? This show is soaked in acceptance, pride, and all of those things that many of you call sin. Just because your President congratulated Miss Barr, did you seriously think this was for only you? No, it was for everyone. For families, for past fans, for people who want to laugh. If you ask me, Roseanne Barr is sitting back, laughing her ass off because both sides have covered this show with the exact same over-the-top presence that is seen on screen. Can we not see ourselves, now ripping each other to shreds over a reunion arc for a classic television show? Roseanne is right, people are funny – and this writing absolutely captured our current political climate to a tee by doing barely anything, as everyone who has covered or commented on it have lost their damn minds, forgetting this is entertainment and we should just be glad it’s good. It is so ironic, but when you look between the lines, the message is so clear – and I can hear that cackling laugh in my head as such headstrong entities bash heads over something that is allowing us to chuckle at how silly we all are. 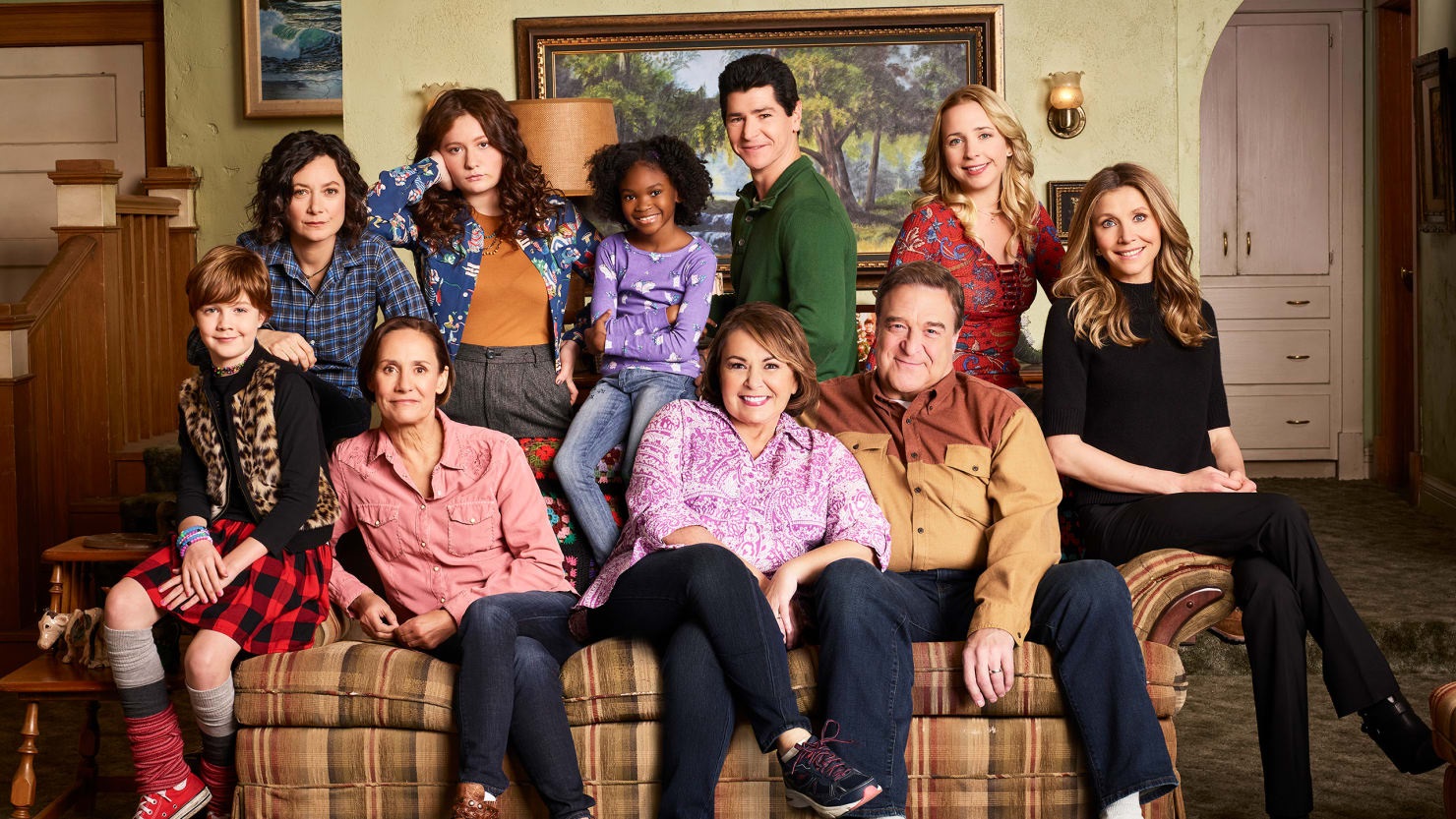 Roseanne’s reboot has seven episodes left of her return, and everyone is still invited. Forget about what you heard her say on Twitter or saw her do years ago that was wrong. She is a comedian, and just like Griffin, Godfrey, and just about every other notable comic from the era, she does and will always do controversial things. As a viewer then and now, I still see why this sitcom has such a hold on its audience, as this family is Roseanne’s realistic view from a writer’s standpoint of modern America, and I personally think it is time to stop arguing and enjoy one last, long ride through Lanford. This time though, lets check the baggage at the door. 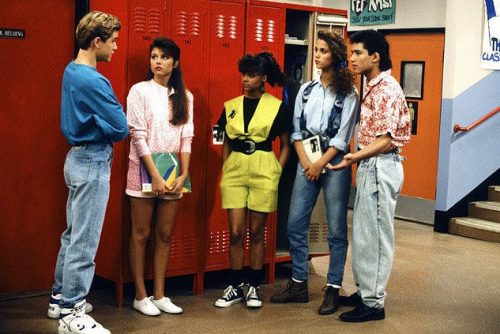 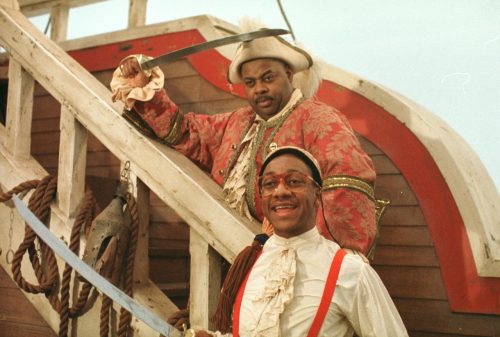