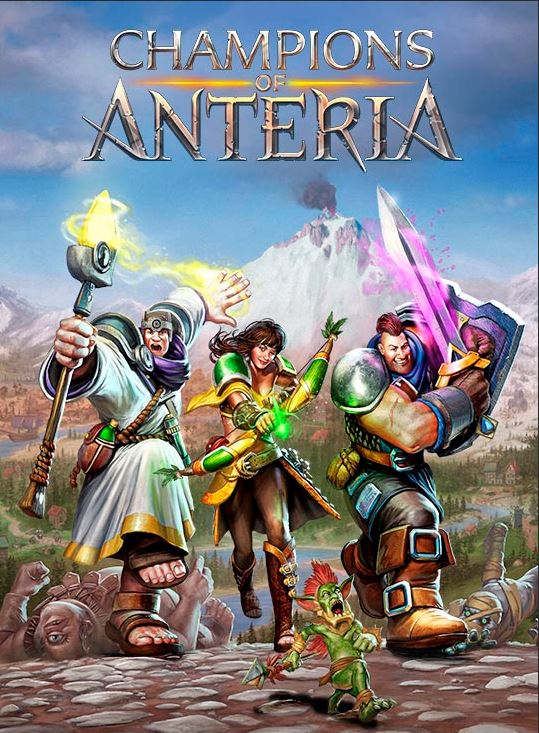 Champions of Anteria is a brand new IP from Blue Byte, the studio most famous for their work on The Settlers and Anno franchises. Champions of Anteria is a mix of real time strategy and turn based kingdom building. The game started its life as part of The Settlers franchise, but has been split off into a brand new IP set in a world caught in the midst of bloody inter-faction warfare while an evil wizard quietly builds an undead army in the shadows.

Champions of Anteria may sound like a standard fantasy franchise with factions battling for power and evil wizards, but the game is incredibly light hearted and relishes in mocking fantasy tropes. The game revolves around a mayor of a small village that is under the thumb of the evil wizard who tricks three heroes into freeing the town and rebuilding it to its former glory. While it’s simple humour may not appeal to everyone, I suspect most will have a good laugh with the game. 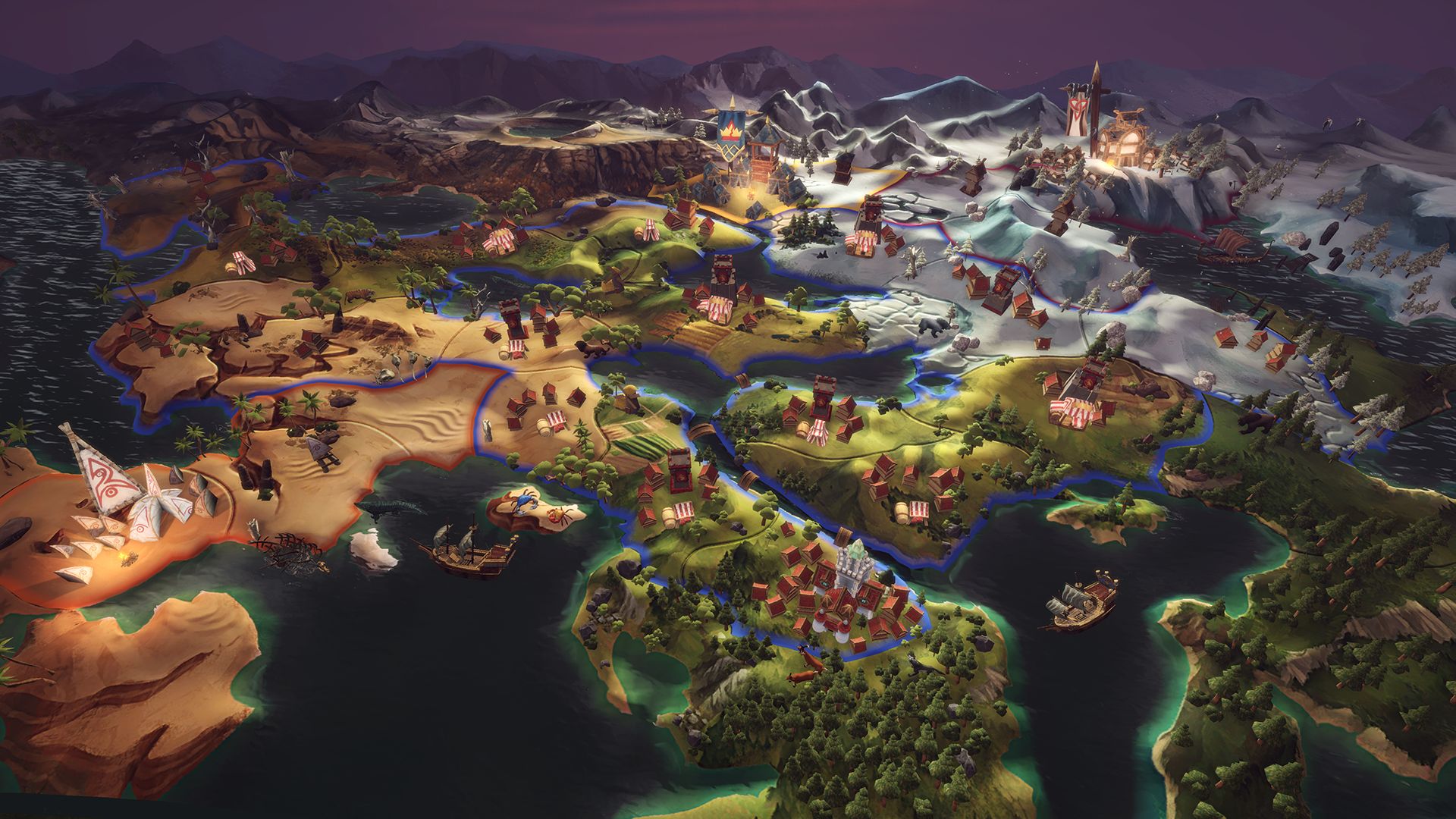 The gameplay in Chapmions of Anteria cycles between two phases, a combat phase and a kingdom building phase. The combat is small unit RTS with players controlling three of five possible heroes. Each map has a set of main objectives to complete and possibly a side objective or two. Combat is built around a rock, paper, scissors type elemental damage mechanic. There are five elements in the game: metal, nature, lighting, fire, and water. Each element has two elements it is neutral with, one element it is strong against, and an element it is weak against. Every unit in the game is assigned one of these elements. Since players are only allowed to select three heroes, each playable hero has a main element and a set of abilities from a secondary element. The main strategy in the game is to send heroes after elements they are strong against.

To aid players in planning, Champions of Anteria can be paused as needed. This gives players some time to examine the battlefield, plan their next moves, and ensure they can get the upper hand in the situation. Since the game has no real dedicated healer and potions are limited to however many the player can afford to craft, using the right character in the right situation is an absolute must. Being weak to a element means a character will take extra damage and the end result is devastating. In addition to potions, players can deploy a variety of turrets to help provide some extra DPS in battle. Like every other unit in the game, turrets have their own elemental assignments. These turrets only last a set amount of time and cannot be moved, but also serve as an excellent damage sponge. 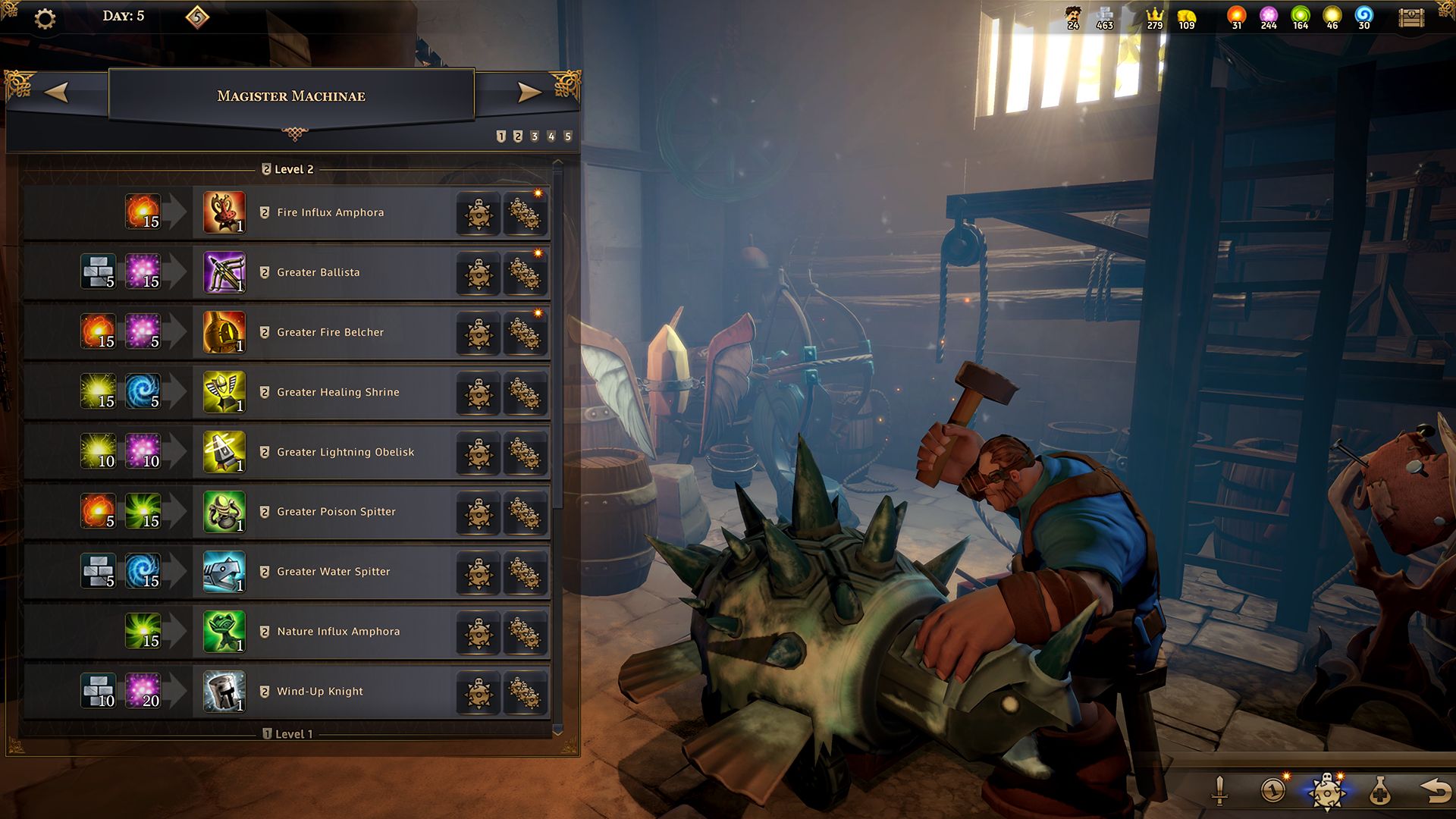 Each character in Champions of Anteria gains new skills as the kingdom grows. They can bring up four skills into battle. The skill tree is pretty simple with only two branches for each hero. Each hero has their own resource pool and method of generating said resources. Like any good RPG, heroes can also equip weapons, armours, and trinkets for stat boosts.

The maps in the combat phase are pretty linear. There are some side paths here or there that will help the player avoid enemies, get to their objective sooner, or complete a side objective. The game’s real gem are the epic boss battles. These are extended fights that will test not only the player’s combat prowess, but their preparation as well. 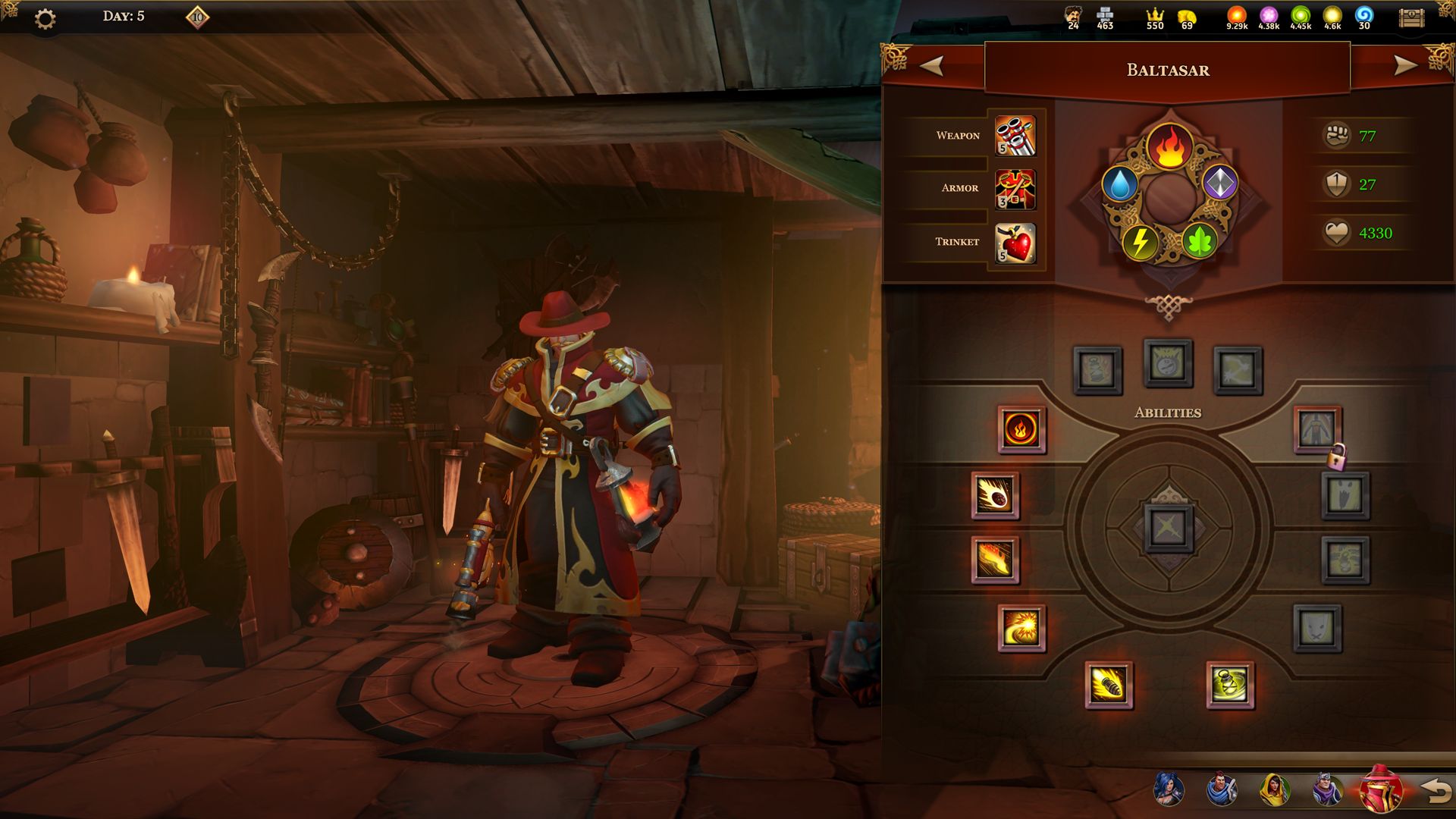 Once a combat mission is complete, players are returned to the kingdom screen to plan their next move and grow their kingdom. As the kingdom becomes more famous with the heroes’ conquests, the kingdom’s skill tree and the village will grow. There are several currencies to manage in the game: gold, building supplies, and the five elements. These are spent on new buildings, consumables for upcoming battles, and equipment. While not particularly complex, the kingdom phase puts an interesting, more thoughtful spin to the game.

Champions of Anteria’s audio/visual presentation is solid. The art style is a cartoony fantasy, with the exaggerated features and bright colours. The style fits beautifully with the light hearted delivery of the game’s story. The music and sound effects is pretty standard for a fantasy game, but are enjoyable none the less. The voice acting in the game is very good. There are a few rough patches here or there, but it is very close to a triple A experience. 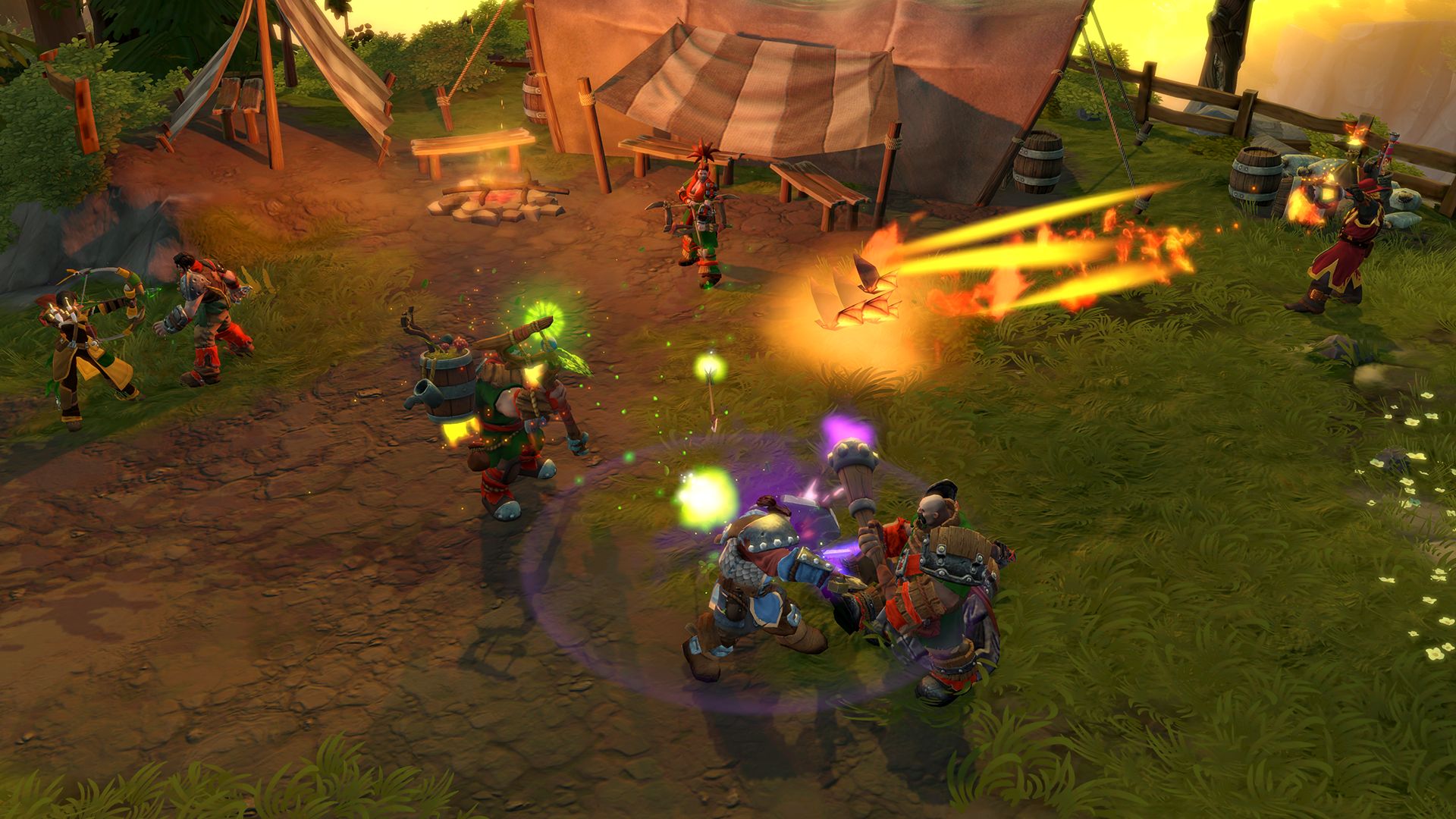 Champions of Anteria is launching in just under a month, but the game is already looking very good. The story is enjoyable and the humourous delivery really lightens the mood. The game has a great mix of real time combat and casual, turn based kingdom building. The audio/visual presentation is excellent. Like any pre-release build of a game, there is some room for polish and optimization on the technical side, but Blue Byte may have a great new franchise on its hands. 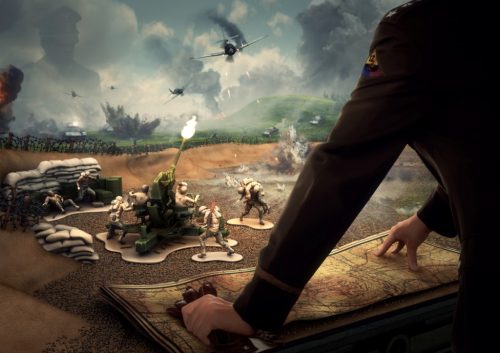