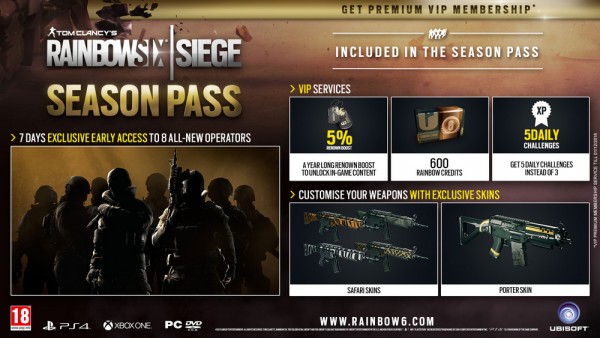 With the recent announcement that almost all of Tom Clancy’s Rainbow Six Siege’s DLC will be unlockable through gameplay, most are wondering how the inevitable Season Pass will work. Today, Ubisoft released details of the Season Pass.

Buyers will get access to all eight of the new operators, seven days before the operators are available to the general public. Owners will also get access to an exclusive Porter weapon skin and the Safari Bundle of five weapon skins. The Season Pass will also give accounts a permanent 5% Renown booster, two extra Renown challenges, and 600 R6 Credits to let players purchase content right off the bat.

Tom Clancy’s Rainbow Six Siege’s Season Pass will cost $29.99 USD and also comes bundled with the Gold Edition of the game. The game launches on PlayStation 4, Xbox One, and Windows on December 1st, 2015.