I think that title sums it up nicely. Platinum Games have been everywhere as of late, and have released a new trailer for Transformers: Devastation (published by Activision) that shows off the stunning art design as well as the general action packed experience as a whole. Sure, its different from what we typically see for the franchise in video game form, but fans are sure to be happier with this much more tuned in version.

TRANSFORMERS: Devastation brings Hasbro’s converting robot titans to life with classic Generations styling and modern attitude. This new trailer highlights four of the five playable heroes in the game – OPTIMUS PRIME, BUMBLEBEE, SIDESWIPE and WHEELJACK – as well as notorious foes like MEGATRON, STARSCREAM and the towering combiner, DEVASTATOR. Whether leaping into vehicle form to ram enemies at high speed or juggling them in mid-air with a flurry of blinding-fast combos, the dynamic action of TRANSFORMERS: Devastation is so close it’s personal.

Check out the trailer for yourself down below and expect this beast to unfold later this year.

Test Your Transformers Knowledge at a New Kings Trivia Event 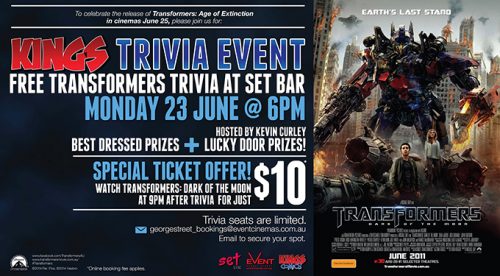