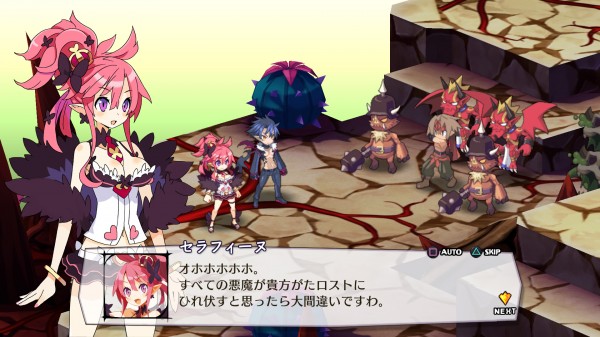 Today Nippon Ichi Software released some of the first pieces of artwork as well as screenshots for Disgaea 5 and alongside these images comes new details for the title. First of all, the main enemy in Disgaea 5 appears to be a demon emperor named Void Dark who has been destroying Netherworlds at whim with his brutal ten billion soldier strong army of Lost. While no one has dared to stand up to him, and those that did were obliterated, demons within his own ranks have begun to rise up against Void Dark and that is who players will be controlling.

Disgaea 5 will take place across numerous Netherworlds with demon lords teaming up to fight against Void Dark. This includes Kilia who is the protagonist and is not a demon lord, but has powers rivaling one, Seraphine of Gorgeous Netherworld, and Usalia of the Rabbit Netherworld.

It also appears that there is a new “Revenge” system being implemented into the game’s combat system, though no details about the system have been revealed at this time. Disgaea 5 is set to be released in Japan in Spring 2015 for the PlayStation 4 so we can likely expect an announcement from NIS America sometime early or mid-2015.