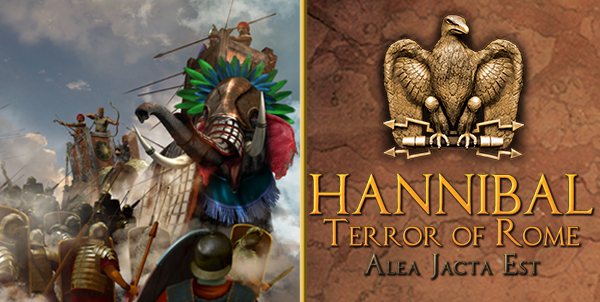 For lovers of grand strategy, a new installment of the Alea Jacta Est series has come to fill in that empire-sized hole deep down inside. The new installment, Hannibal: Terror of Rome, was developed by Ageod and published by the Slitherine Group. The series aims to portray the epic conflict of the Ancient Superpowers; Carthage and Rome. Players will be able to fight as the infamous Hannibal with his elephants or, in a surprise twist, against him to protect Rome against the Punic menace.

This game makes the bold claim of being a true simulation of being a commander in the Ancient World. You’ll have control over building, managing, organising and maneuvering your armed forces will juggling the economic, military, and political effects of your actions. The game is built upon the Adaptive Game Engine and is able to offer a smorgasbord of details for any grand strategist to consume and mull over.

The game features a number of historical scenarios including:

-The First Illyrian War (230-228BC) where Rome and the Achaean League take on Greek pirates in the Adriatic Sea.

-The Second Punic War (219-201BC) is the infamous campaign between Carthage and Rome wherein Hannibal crossed the Alps.

Hannibal: Terror of Rome is a stand alone game which does not require the original Alea Jacta Est game to play (huzzah!)

This is a stand-alone game that does not require the Alea Jacta Est base game to play and can be found here. To celebrate this new installment the original will also be on sale for a 60% discount on the original game.