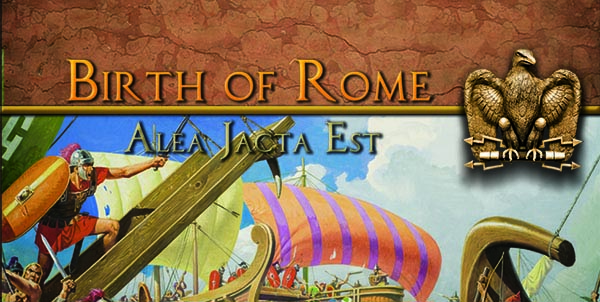 Strategy buffs will be in heaven with the announcement of Birth of Rome. Taking place during Rome founding eras, it follows the battles and events leading to the unification of Rome and its rise as a great and powerful empire. The title runs on the popular AGE engine which has been based on the mechanics of Alea Jacta Est. Birth of Rome consists of five different scenarios throughout Roman history, including the Punic Wars and even as far back as the 3rd Samnite Wars, with the latter battle giving Rome full control of the Italian land mass.

The focus will be massive sea battles and large fleets , which were an important part of Rome’s strategy to maintain control of vital waterways and ports. In addition to the aforementioned 3rd Samnite scenario, the bloody battles with the Gallic tribes will be covered in Semones War, the Pyrrhic Victories where the Senate drove out a warrior king from southern Italy. The fate of Sicily will be in the hands of the player as they attempt to follow history’s course in the First Punic War againt Carthage and the mighty Hannibal. This episode will feature heavy reliance on a strong fleet to keep the Carthaginians at bay. AGEOD, the games developers, made this a stand alone game and even though is designed around the mechanics of Alea Jacta Est, will not require the game to play.

For history buffs yearning for more, expect the game to be released this year, and additional info can be found at www.AGEOD.com