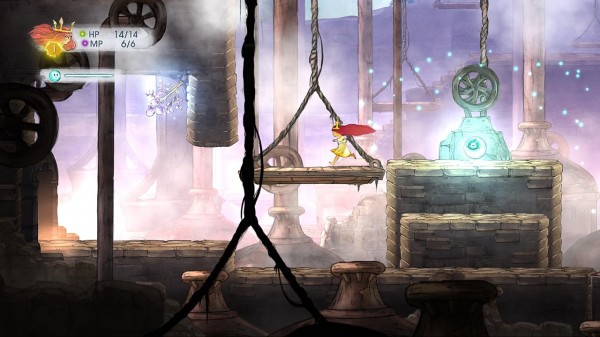 Some might look at Child of Light as a bit of an enigma amongst the large catalogue of Ubisoft Montreal-developed games… a side-scrolling, 2.5D role-playing game inspired by the fairy tales of our childhoods and some of the gaming community’s Japanese favourites, namely the early Final Fantasy entries. Sounds surprising, but I don’t know exactly why that is; the team has shown an outstanding talent base and ability to create extremely varied experiences, from Just Dance 3 to Far Cry 3, Prince of Persia and even Shaun White Skateboarding. Child of Light is a particularly creative endeavour, which has captured my attention and imagination after playing through its first two hours as a solo experience. 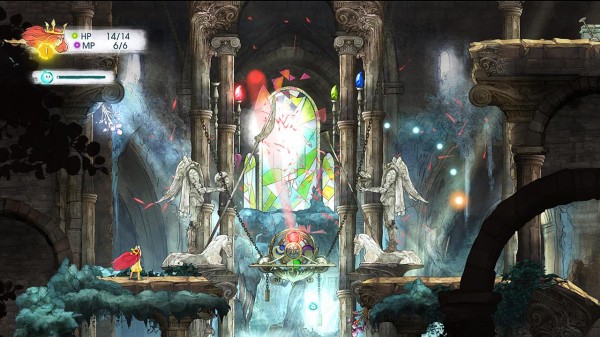 As the opening cinematic rolled, I was immediately struck by the beautiful, painterly art style that carries through every visual aspect on screen, cut scene or otherwise. The game utilises the UbiArt Framework, which many will recognise as the engine used for Ubisoft’s recent Rayman games. The colour gradation and shading on all objects is illustrative of by-hand brushwork with its watercolour texture. And the world is extremely detailed, aiding in portraying a fantasy world that appeals both to adults and children, without ever erring into the cartoonish or simple in order to ensure the engagement of the latter at the sacrifice of the former’s. It has true charm, with the kingdom of Lemuria being portrayed in some very traditionally stately manners. A regal air is always present given the setting, and the fact that our player character Aurora is referenced as a Princess although she constantly makes a point of reminding everyone of the “faux” etched on the inside of her crown. 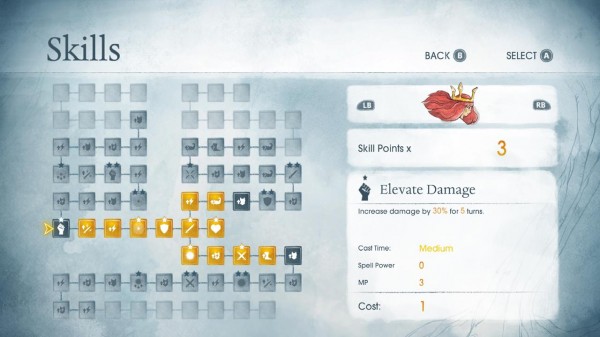 So how did we get to this majestic land? Aurora thinks it all a dream, after falling ill and into a deep sleep. Her mind is set on finding a way home to 1895, back to the comforting arms of her father, an Austrian duke. To do so, she learns that her help is first required in Lemuria; the Queen of the Night and usurper of the throne, Umbra, has stolen the sun, the moon and the stars. Without them, the world is bereft of light, and it is with her aid in recovering them that the kingdom of Lemuria can be restored and her quest completed, hopefully with our protagonist reawakening to find her dear father at her bedside. Not long after entering Lemuria is the player introduced to what Aurora calls “sir firefly”. He is, in fact, Igniculus – a helpful sprite that is simultaneously controllable by the single player, alongside Aurora. There is, however, asymmetrical co-op functionality in the game that allows a second player to take command of the ball of blue flame. Either way, Igniculus plays a pivotal role in both traversal and combat. 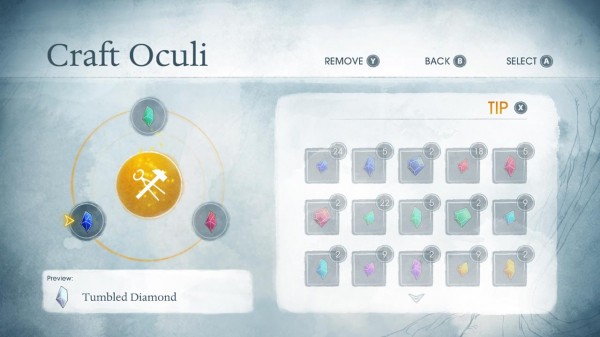 When roaming the various landscapes, Igniculus can be used to light the way, spotlight hidden paths and coffers, solve puzzles, heal Aurora and stun enemies (which allows you to sneak past and avoid conflict). Navigation of Igniculus is handled with the right thumbstick, and in the case of the PlayStation 4 version, the touch pad as an alternative. Clicking in the touch pad, L2 or R3 shines his inner light bright, which initiates his aforementioned abilities. Have him hover over an enemy in this state and they will be effectively paralysed, whilst doing the same but over Aurora will heal her HP. His powers are managed by Light Points, which refill slowly over time, but can also be regenerated by passing over glowing plants and collecting the orbs they release. In combat, the same revitalising flora can be found in the corners of the battleground, and managing the tactical applications of your ethereal sidekick becomes a strategic balancing act. Speaking of combat, Child of Light employs turn-based gameplay by way of an Active Time Battle System. 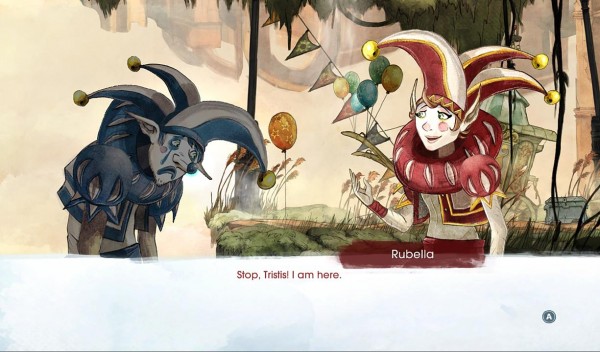 As seen in the screenshot below, a bar is displayed at the bottom of the screen that tracks the order of attack. Icons represent each participant and move along the bar at different speeds (depending on the attributes of each character). When a given icon reaches the “Cast” segment, time freezes to allow the player a chance to choose their action – of note, control of Igniculus is never taken away. There are physical attacks, along with magic ones too. Potions can be consumed, a defensive stance entered and the option to flee engaged. Throughout your travels, Aurora picks up new party members who request help with their own tasks (consider them side-missions), each with their own special skills and strengths. For instance, Rubella – a jester who speaks in prose, like the rest of the population, but never completes her rhymes – has high HP, can heal herself or an ally and can also cure all ailments, such as paralysis, for example. By the way, the scriptwriter here was also responsible for Far Cry 3‘s dialogue/story; quite impressive to read an entirely different writing style from the same man. 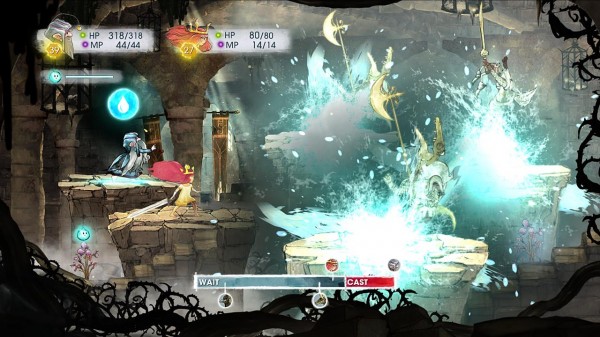 If you find it advantageous to swap Aurora out for a second party member, you can do so. I did exactly that when faced with a giant three-headed serpent at the end of Chapter 4. Combat is deepened further when considering where to spend your acquired skill points upon levelling up (the skill tree being the only similarity with Far Cry 3), the fact that attacks can be interrupted, turns reset and the appliance of Oculi – gems that are obtained from chests and can be combined to craft more powerful modifiers. A direct element that is reminiscent of Final Fantasy is sneaking up on a beast and gaining the first blow. On the flipside, you can also be ambushed, which can be a dangerous disadvantage. Putting combat aside, the kingdom of Lemuria seems to hold six main, broad regions featuring a diverse terrain, scenery and domains within. Across my journey, which amounted to essentially the first four chapters, I ventured into a dark monastery, a distillery, creepy forests, a village of drunk crows (story developments make sense of this vision) and a cave network found deep at the bottom of a well. 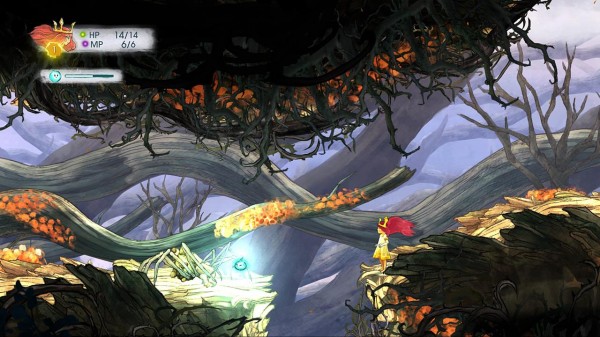 Something I should mention before telling you to be excited for the game (if you aren’t already) is that this RPG isn’t all fluttering around – once Aurora is gifted wings – and fighting off all manner of spiders, mythical creatures and odd, floating sea-horse/dragon-esque abominations. Most areas (if not all) contain a puzzle. They may not tax the mind too much, ranging from classic weight puzzles to casting the right shadow on a corresponding symbol, but it goes to show just how multifarious Child of Light is. Enchanting, fantastical and startlingly deep, Child of Light is now one of my more anticipated titles and gratefully its release is just around the corner, so to speak, on April 30. In fact, Ubisoft just announced a Deluxe Edition! Check it out and keep an eye on Capsule Computers as we look to give you our full review closer to the date.