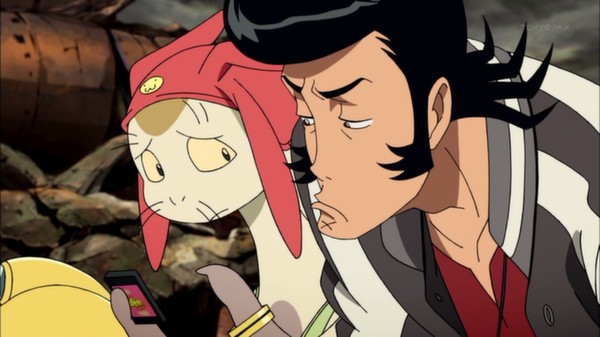 In my long time as an anime fan, I have watched some seriously non-content shows. For goodness sake, I even sat through all of Lucky Star! But at least Lucky Star taught me the pros and cons of chocolate cornet bread which is more than I can say for this episode of Space Dandy! I don’t know who ‘wrote’ the script for this episode, but surely when they looked down at their work and noticed that it was several blank sheets of paper with a crude crayon drawing of Dandy and a dog, beautifully adorned by a macaroni art Aloha Oe, they must have seen something wrong with it. Maybe Watanabe put it on his fridge and the production team took that as a go ahead. Or maybe this is Space Dandy’s attempt at a troll? Either way, I think it is pretty apparent that I wasn’t a fan. 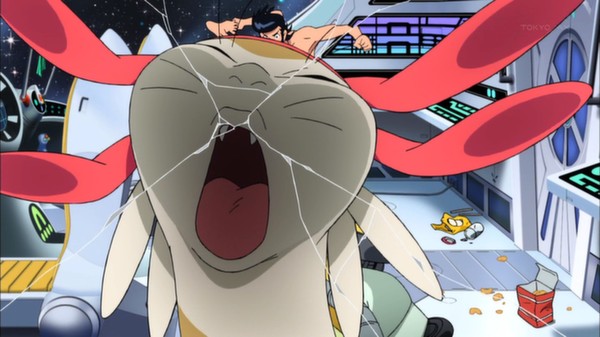 Even in the future, cameras are naturally drawn to cats.

Touching down on this week’s planet, Dandy. Meow, and QT emerged from their ship to find a barren planet entirely made of scrap and garbage. QT rushed off to find spare parts for the Aloha Oe, Meow went on the hunt for food, and Dandy was left with the ship, on the lookout for aliens. From then on, the episode can literally be summed up by: Dandy finds dog, dog dies, two ‘fleas’ jump from the dog to Meow, the fleas turn out to be little aliens that control machines, they infect QT, QT attacks Dandy and Meow, they accidentally kill the fleas, and the planet implodes, taking Dr Gel’s ship with it. Oh, did I forget to mention they were there? That’s because they did absolutely nothing significant except die. 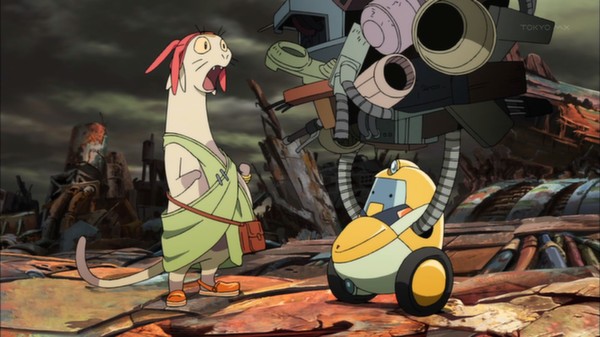 It was about this time that Meow realised he had lost Scrapheap Challenge.

I have cursed myself with this anime. Because I so desperately want it to be good, I have a ridiculous amount of patience with Space Dandy, but episodes like this ware my patience thin. We have seen what Space Dandy is capable of and a number of episodes have been brilliant and I have praised them as such, but then you get episodes like this and episode 2 where so little of significance happens that they’re hardly worth watching. The first half of the episode was only there to introduce the Machinima Brothers (the fleas) and their part in the second half was so minute (forgive the pun) that the 10 minute set-up was made utterly meaningless. It felt like how The Simpsons sets up every episode i.e. something completely unrelated happens for 5 minutes, eventually ending up at the main body of the episode. In all honesty though, I would sooner watch any episode of The Simpsons than episode 8 of Space Dandy, even the awful recent seasons… Yes, it was that bad. 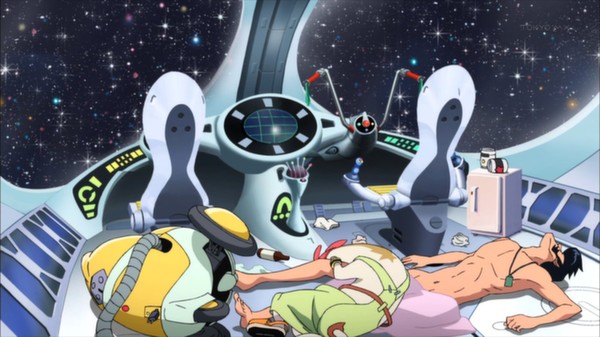 Just one of many lost photos from the Aloha Oe Christmas party.

The only redeeming feature of this episode was the plagued fridge that Meow stumbled upon which was a nice, subtle reference to Cowboy Bebop. Sadly, unlike that episode which was an awesome Alien parody that served to show a more silly, human side to Spike Spiegel, Space Dandy lacked any of the action, charm, and even the jokes that made that episode so memorable. Where was the intelligence of the zombie episode, the character depth of episode 5, the sheer awesomeness of Dandy surfing an explosion into space? Nothing made this episode stand out at all and that is seriously disappointing after its recent great form. 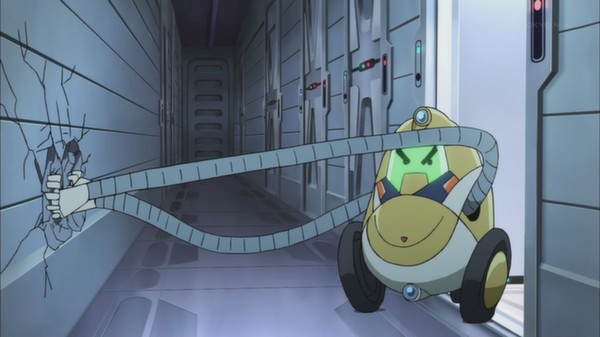 Luckily, next episode looks to be held on a planet considerably more interesting than the ball of garbage that this episode floundered on. We’re heading to the planet of the living plants! If that fails to immerse me back into my delusions that Space Dandy is a good series then I don’t know what will… Until next time. 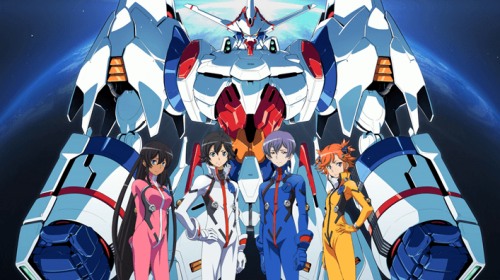