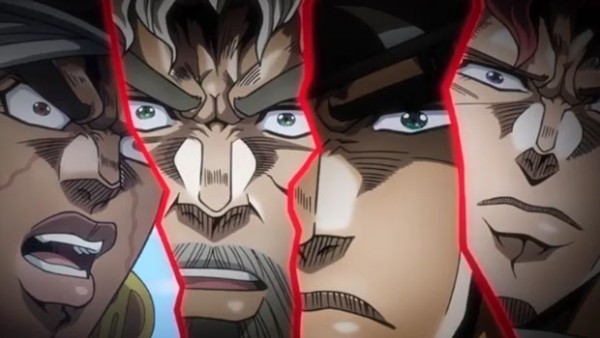 This anime season is almost over and even thought it IS summer here in Australia I was definitely feeling the chilled winds of a Japanese winter. Thoughts on the winter season? It wasn’t terrible but apart from outstanding series’ like “Space Dandy” and “Noragami” I found it to be, for lack of a better word…flat. What I felt the winter season lacked, for the most part, was interesting characters and overall good writing but my spirits are still high because I have grand hopes that the spring anime season will make up for what I believed the winter season lacked.

I can hardly believe that, years ago, I never enjoyed the sci-fi action of a “mech” anime. Luckily I’ve changed in a big way because most of the spring anime titles I’ve chosen to follow pretty much revolve around “mechs” in way way or another. Much like last season my sights have been entirely set on one particular anime; “JoJo’s Bizarre Adventure Season 3: Stardust Crusaders”. Last season I had my eyes glued to “Space Dandy” even before it first started airing but this season “Stardust Crusaders” has gotten all of my attention and I hope with all my heart that my other anime picks can stand alongside “the next “JJBA” anime series when it comes to quality because they have quite the expectation measure up to. Speaking oh which, let’s get a move on! 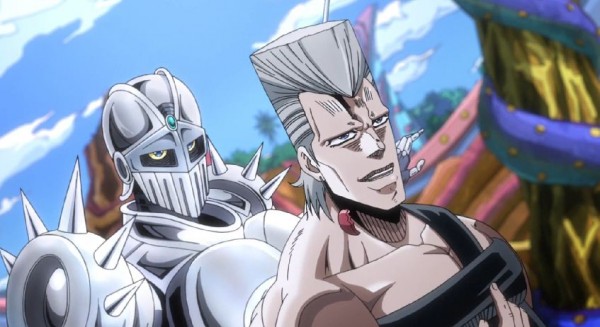 Two Japanese teenagers, an old man, a middle eastern mystic, a flamboyant frenchman and a dog travel the world in search for an ancient evil that may or may not have been a part of the band “Black Sabbath”. I really shouldn’t have to give anymore explanation than that but what kind of pop culture journalist would I be if I simply left a description at that? Surely by now, if you’re a GOOD anime fan, you would have heard of a little shonen series called “JoJo’s Bizarre Adventure”. Created many years ago by an ageless man called Hirohiko Araki, “JoJo’s Bizarre Adventure” is one of the longest running manga series of all time.

With eight different parts, each of which hosting different characters and storylines, this series has a lot of tales to tell and recently the animation studio “David Productions” have picked up the series and started turning it into a modern anime series beginning from the very first storyline “Phantom Blood”. Within the past year we’ve been through the release of the first two seasons; “Phantom Blood” and “Battle Tendancy”, within this new anime season comes the third installment of the “JJBA” anime series “Stardust Crusaders” which follows the juvenile delinquent and total bancho bro Jotaro Kujo as he uses his brand-new supernatural abilities to take on an evil that MAY just mean the end of the world if not stopped. “Stardust Crusaders” was the only “JJBA” series to be released outside of Japan so you can imagine that a great deal of the Western fans of the series would be shaking in their seats right now and, well, so should you! 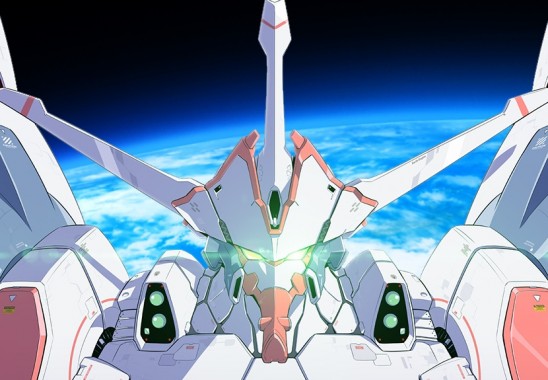 I heard that the name “Captain Planet” was already taken so the people behind the upcoming anime “Captain Earth” had to chose that title instead. Now I’ll be entirely honest with you; I haven’t actually seen much of this show but from what I’ve read about it I think that it may just be one that’s worth checking out even if it does end up being a little silly. Basically a young boy finds a cool looking robot, alien forces attack and he’s forced to pilot the hulking mass of robot into victory…pretty simple. That’s as basic as it comes and, let’s be entirely honest here, we’ve seen this kind of thing before BUT “Valvrave the Liberator” started in this fashion and that series ended up taking twists and turns like you wouldn’t believe so I’m willing to put my faith into something simple with the hopes that they take the fundamental aspects of any “mech” anime and do it damn well!

Obviously there’s more to this anime than just that but as far as official descriptions go; that’s the long and short of it. Boy meets robot, robot beats aliens, world loves boy. I’m mostly interested in this anime because a) BONES is producing it and they developed fantastic series’ like “Fullmetal Alchemist”, “Soul Eater”, “Norgami” and “Space Dandy” and b) the robot within “Captain Earth” somewhat reminds me of “Heroman” which is an old anime series that was co-created by American comic book God Stan Lee. Both I feel are good enough reasons to follow a show, even though one is clearly more thought out than the other. In all seriousness though I really do wish the best for this series, it seems as though it may be more than just “boy meets bot” and even if it ends up being just that I’m sure the writers will do the genre justice. 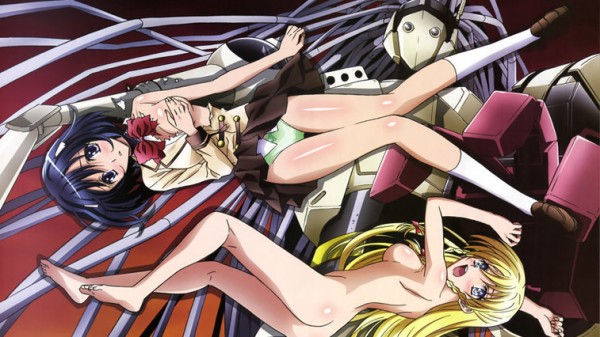 Much like “Captain Earth” I can’t say that I know a great deal about “Kenzen Robo Daimidala”. I heard about this a while back when it was first announced and it has sat there in the back of my endless mind for what seems like an eternity only running to the forefront as a glanced past “Daimidala” while looking through the spring anime season series listings. “Kenzen Robo Daimidala” follows on with the “boy meets bot” theme but puts a pretty big twist on it and I think that is simply because its a comedy series…unless I researched incorrectly. Koichi Madanbashi is a young boy who attends highschool. He’s a seemingly normal high school student: he’s lazy, he’s stupid and he’s a bit of a “perv”. One day young Koichi discovers that he has a source of energy hidden within him called “Hi-ERo Particles”, a force that he also discovers to be the main power source of an incredible giant robot. So far so good.

As he discovers this, his town is attacked by…yep, you guessed it; a malevolent force known as the “Penguin Empire”. Using this hidden power alongside his new robot friend, Koichi fights off the invading forces and begins his life as a hero. Once again pretty damn simple but also fairly attractive to an anime viewer who, now and then, enjoys a bit of comedy. Oh! I forgot to mention one thing! He powers himself up with these “Hi-ERo Particles” by getting all “touchy touchy” with the girls around him…I guess he puts the “ero” in “hero”. Look, people, it DOES seem a little silly, I’m fully aware of that but I’m trying to stay positive. If this series can give me a laugh or two within the first episode I will most likely stick with it but I can’y honestly see myself staying with it for too long. Prove me wrong “Kenzen Robo Daimidala”! Prove me wrong! 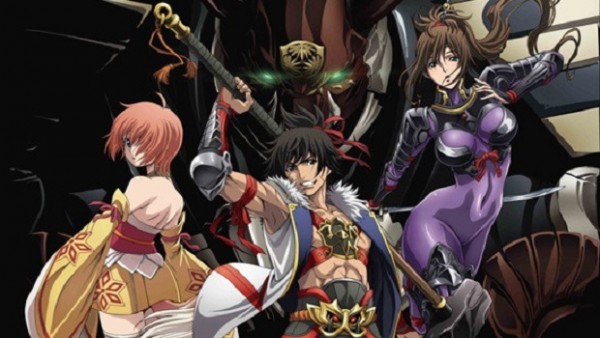 Basically “Fuun Ishin Dai Shogun” is the spring anime seasons version of “Nobunaga The Fool” which aired throughout the winter anime season. It takes Japan during the Meiji Restoration period (more specifically; just before it) and tosses a bunch of high-powered, robot, giants, into the mix. I avoided “Nobunaga The Fool” like the plague last season despite the fact that I love both “mech” and “samurai period” anime, the funny thing is that I couldn’t even tell you exactly why so I have to make an amendment, I HAVE to follow “Fuun Ishin Dai Shogun”! This series isn’t exactly like “Nobunaga The Fool” but they are quite similar in premise so I can imagine people will be comparing the two quite frequently.

“Fuun Ishin Dai Shogun” takes place in Japan just before the “Meiji Restoration Period” (look it up) wherein which foreign ships were driven away by huge mechs called “Onigami”. Due to those ships being sent away, Japan has been in a state of isolation for a very long time therefore the country hasn’t really changed much from that period of time but there’s still robots! That’s something different! What I’m really into when it comes to this series is its artistic style, from the small promo video that has been released as well as some character art assets the series is actually looking to be quite good. Hopefully it doesn’t end up going down hill or getting TOO silly but I have more faith in this one than in “Kenzen Robo Daimidala” so that has to be saying something. 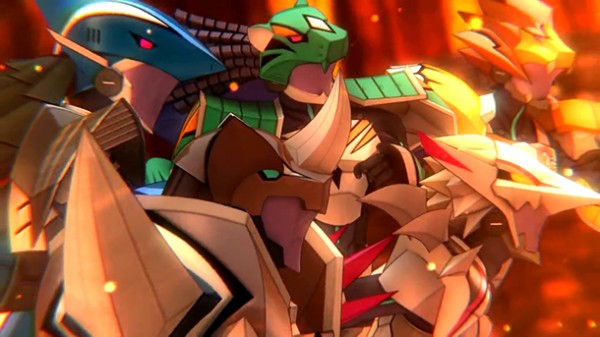 We’re still a few weeks away from the beginning of the spring anime season so it’s not odd for there to not be that much information on the upcoming series’. Unfortunately though, us here on the Capsule Computer anime team have to write about them so it doesn’t really help us that there isn’t too much information circling the net. “Majine Bone” is almost entirely bare when it comes to a series description. All we really now at this point in time is that the series will feature people with the ability to transform into powerful warriors. The designs of these transformations remind me a great deal of “Gatchaman Crowds”, a beautifully-animated series which premièred last year, and that gives me great hope in the aesthetic quality of the series.

Apparently “Majin Bone” is the anime adaptation of a card game project created by “Bandai” but even information on that particular card game is scarce though I believe it may have a release sometime around that of the anime series, I guess we’ll soon see. Lately the anime industry has seen a rise in the amount of CGI animation used within series’ animated mostly traditionally. At first it didn’t seem like it fit well but I feel as though, ever since the release of “Tiger And Bunny”, the quality of anime series’ that mix traditional and CGI animation has risen exponentially, I suppose that’s why I’ll put my faith into “Majine Bone”…hopefully the series wont do us wrong. 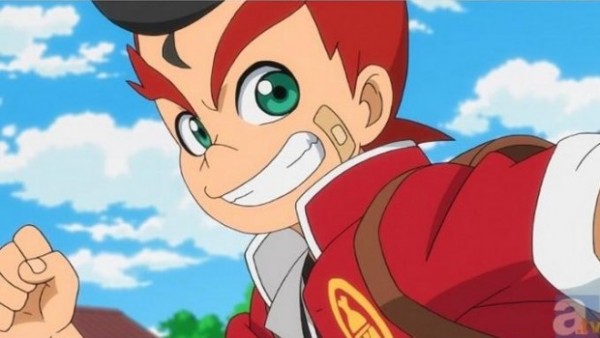 Now this series right here is one that I usually wouldn’t want to get into but seeing as I’m clearly in a more adventurous mood I may as well give this one a try. “Hero Bank” is another anime that is being based off of a game; it revolves around a young buy who gets into a fair bit of debt somehow and his quest to get himself out of it using an oddly awesome program called “Hero-Gi” which allows him to take part in paid “cyber battle” wherein which he can fight other “Hero-Gi” users in the hopes that eventually he’ll win himself enough money to wipe away his ungodly debt.

I happen to love anime series’ that have been adapted from games but they have proved to not be as good in the past so I stopped viewing them, “Hero Bank” though…it has sucked me in and now I’m kind of excited to see exactly where the series goes. It’s been a while since I’ve watched an anime series with a protagonist as young as this one but I’ve got the feeling I’ll love it for the sense of nostalgia it will surely give off. The aesthetic style of the series looks fantastic in my opinion, though it IS childish in the way it looks I think sometimes that’s exactly what you need to break up the monotony of such serious-looking anime titles. I’m quite exited for “Hero Bank” and I really hope a distributor like “Crunchyroll” picks it up soon! 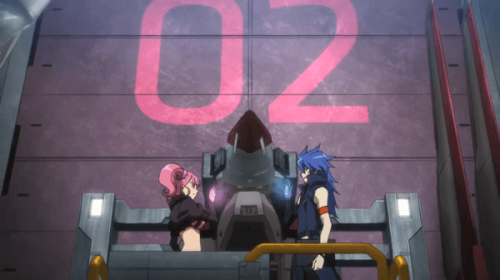 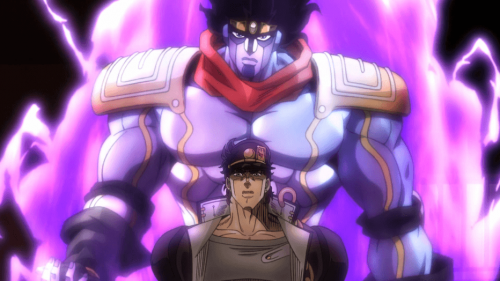