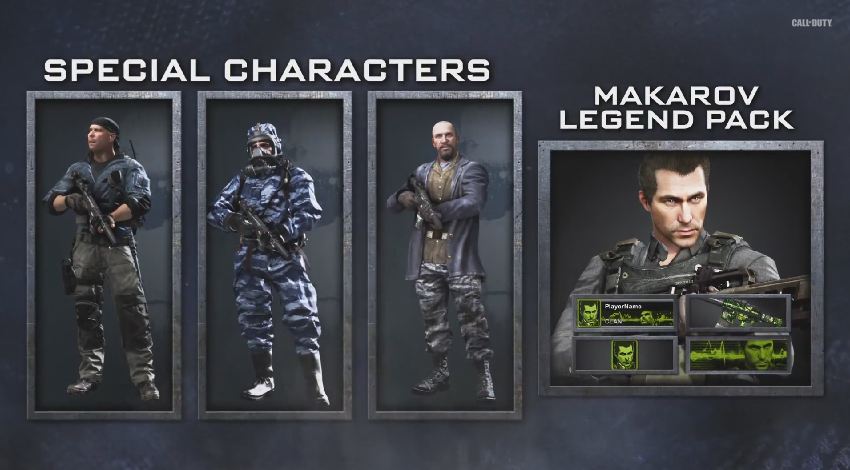 The new faces of online combat

Infinity Ward and Activision have released a new trailer that showcases a few little additions to the Call of Duty: Ghosts multiplayer experience. Just as with the first lot of customisation items, expect to find some new skins which you can use to give your online avatar of destruction a little facelift. More specifically, these are:

Makarov Legend Pack: Play as Vladimir Makarov, one of the most ruthless villains in Call of Duty history. This Pack contains a Makarov Multiplayer Character and unique Personalisation Pack featuring a themed weapon camo, reticle, patch, playercard and background.

Zakhaev Special Character: Zakhaev is one of the most dangerous villains in Call of Duty lore. Play as this insane revolutionary in Multiplayer.

Rorke Special Character: Play as Rorke, the former leader turned nemesis of the Ghosts. Take control of this battle-scarred villain in Multiplayer.

Hazmat Suit Special Character: Though it won’t protect from a hailstorm of bullets and shrapnel, the all-new Hazmat Suit ensures you will stand out from the crowd in any Multiplayer match.

So check out the trailer below and take a look at the new faces bound to be storming across the battlefield en masse. You’ve gotta put effort into your appearance, it’s war after all.