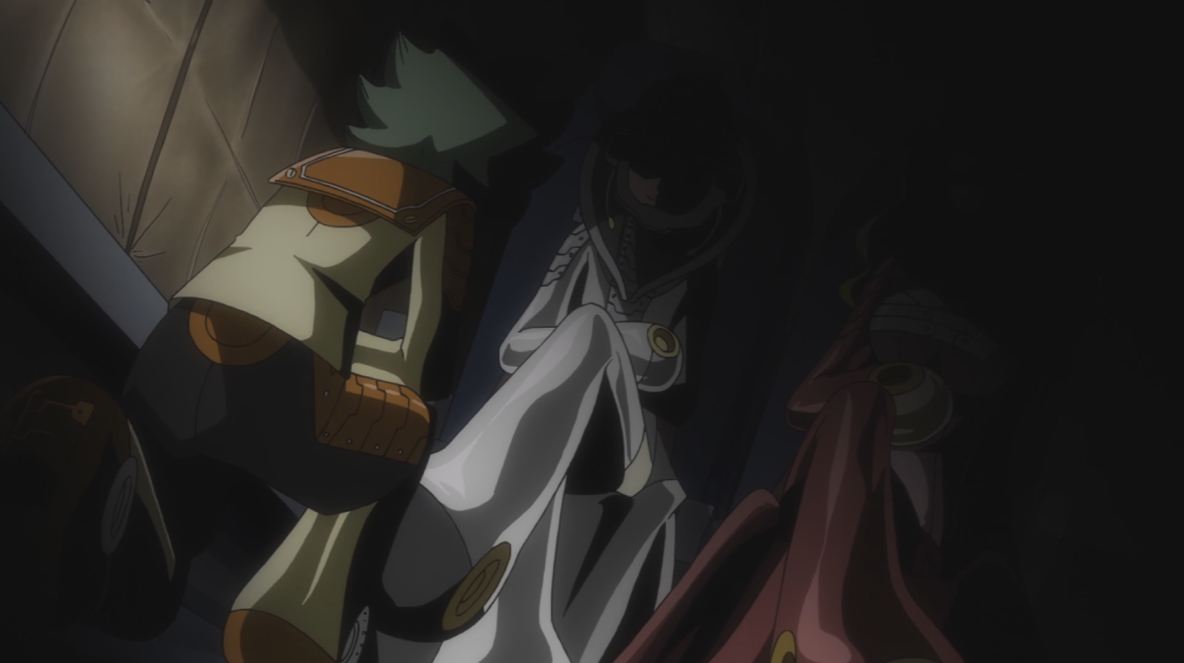 With last episode’s glimpse into the world of the Second Platoon, it’s time to shift perspective and take a look into some different members of DOGOO. Namely the First Platoon. Numbering only three E-Gene Holders, this elite squad is assigned a transport mission of presumably high priority. But as we all know is the case with anime, no mission ever goes smoothly from the get go…

It would seem that Sio just can’t avoid spotlight, as the episode begins with the First Platoon mulling over the ramifications of a new recruit. Apparently Geronimo, assumed leader and “Princess” of the First, believes the Second to be nothing more than a bunch of wimps and this new recruit to be rather lackluster. Though this could just be arrogance and bravado talking, it may hint at some truly amazing escapades that have occurred off screen. Maybe the fights we’ve seen thus far aren’t the greatest threats humanity has faced? Either way, it’s still rude. That being said, not everybody in the First Platoon has it out for Nobunagun, in fact quite the opposite. That’s right, time to throw another name into the relationship equation because Gaudi’s got the hots for Sio, a fact that is topic of ridicule for the less than polite Cyx. Poor Gaudi, saddled with two women who seem to mess with him for fun, in playful way of course, though it’s still kinda mean. 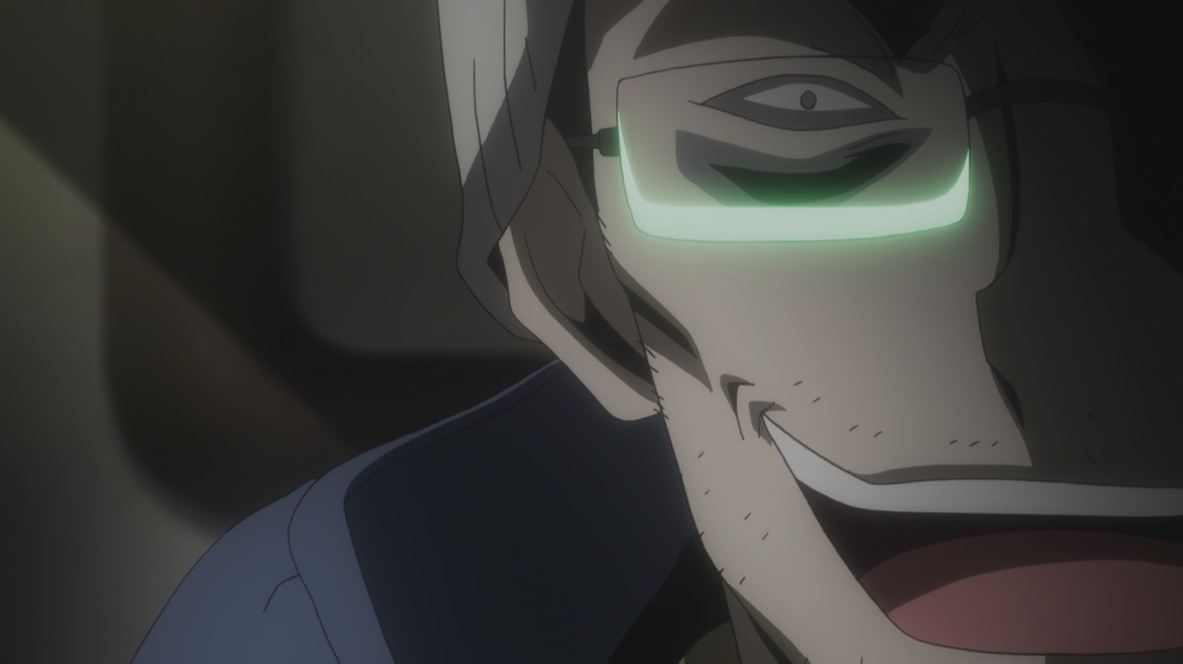 Now there’s a face you can trust

After their mission goes south in a big way, we get to see the First Platoon in action. In far more extreme conditions than usual, Geronimo and Cyx decide to take the smart option and contact HQ. But in these hazardous temperatures, trekking 3km is no easy feat. What’s that? Cyx can turn into a snow mobile? Well isn’t that a convenient, yet still oddly specific power to possess. Anywho, once at their destination we meet Gonda, a scientist spending his days alone doing sciency stuff. Now, if you recall the opening sequence of the episode, the sudden disappearance of his co-workers may come as a shock…as it rightly should. Gonda is just a little bit confused…and a lot violent. After taking a joke just a little bit to seriously, he snapped and decided that living wasn’t something his companions should do anymore. These events set this episode apart from those previously, as it is the first time we’ve witnessed a human enemy. Though still connected to the Evolutionary threat, albeit in a strange way, we’ve never seen how E-Gene holders handle such an opponent. Apparently they don’t. Whether a rule or personal code, Geronimo forbids the use of AU Weapons on anything other than monsters. In addition to being overkill in its purest form, crossing that line would definitely put DOGOO in a different light. Gonda’s slip into insanity also expresses a much darker side of the Evolutionary threat. I mean, how would you react to seeing one of those creatures, let alone thinking that you ate one? 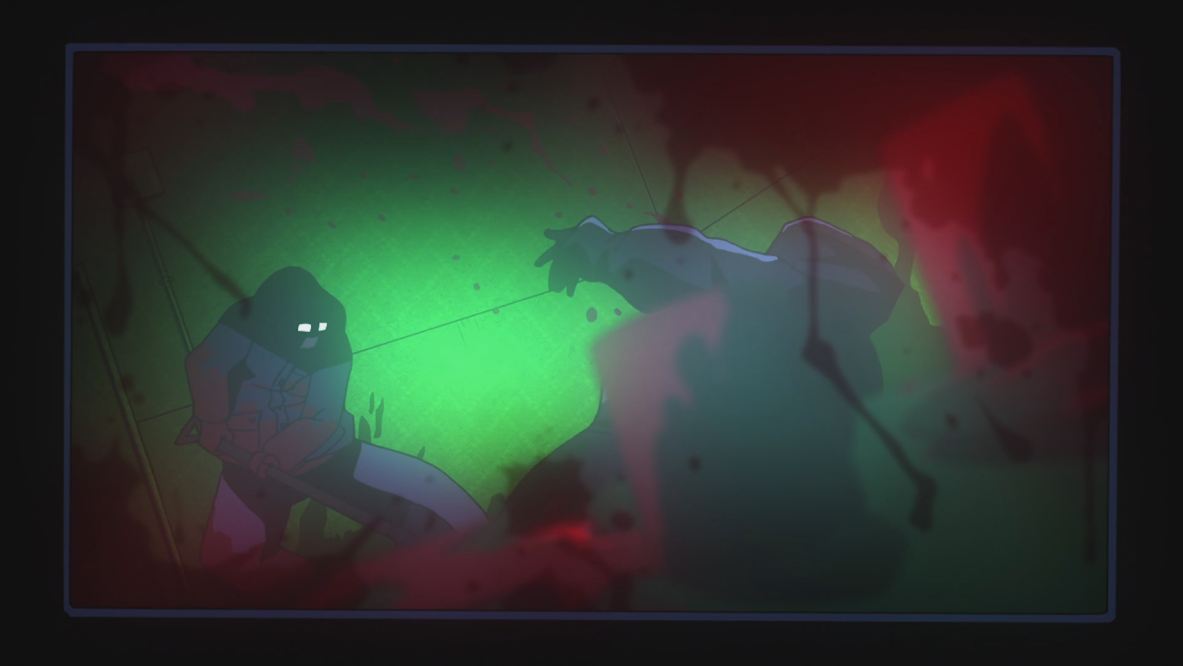 Over the course of their stay at the Suspicious Inn, Geronimo’s blase attitude is revealed to be a cover for her sharp mind. While Cyx is still holding out hope for a less blizzardy tomorrow, Geronimo has already pieced together the clues and determined the danger of the situation. This lends credence to her confidence in the First Platoon, as well as showcasing that even front line DOGOO soldiers can be perceptive outside of battle.

Throughout the episode, we also learn more about each characters individual quirks and skills. Though the youngest, Gaudi is shown to have a powerful AU Weapon that he utilises rather creatively. He also apparently has a fantastic sense of smell. Do you know what explosives smell like? I sure as heck don’t. Cyx’s odd weapon on the other hand is shown to serve as transport for Geronimo, though hopefully this is not the sole function of her power. Shown briefly at the conclusion of the fight with the escaped Evolutionary Threat, Geronimo’s weapon is shown to possess incredible offensive power. We also briefly see that, much like Sio, Geronimo’s personality shifts in the midst of battle. Unlike her usual collected self, she lets out a few battle cries when attacking, not to mention her glowing red eyes and crazy smile. Looks like the mental rush can affect anyone. 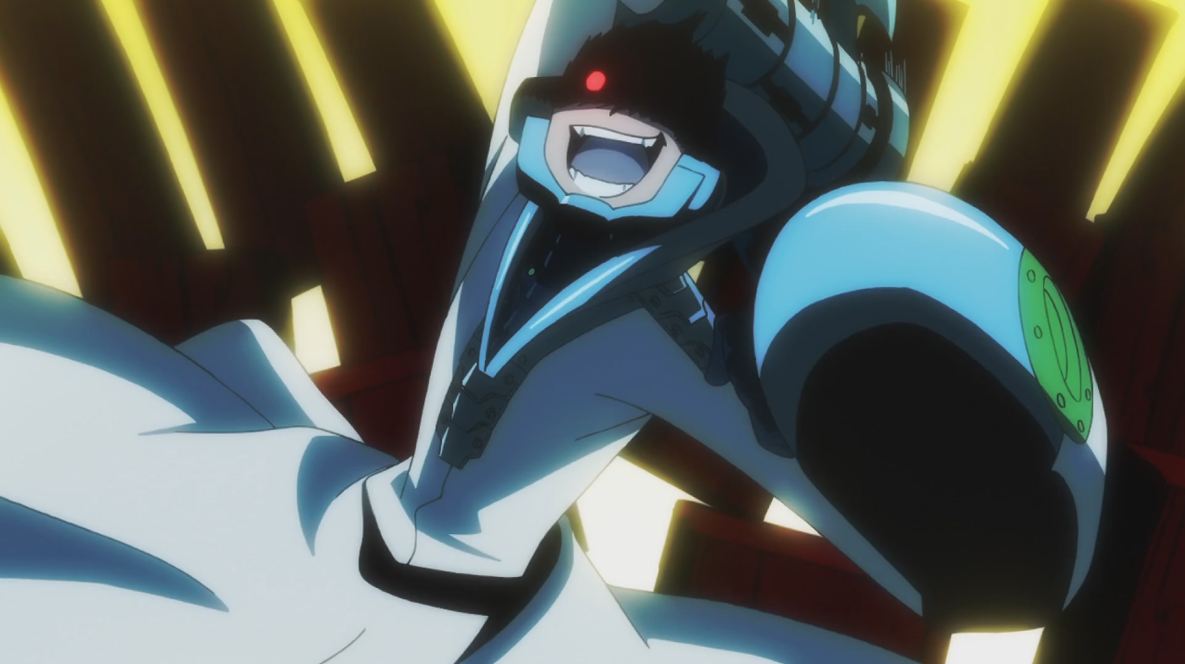 So there we have it folks, the first chapter in the story of the First Platoon. Just a little bit different than the Second don’t you think? That being said, there’s still quite a collection of personalities in this elite division, so I’m sure they’ll mix nicely should the divisions ever cross. Should that come to pass, I’m sure that the already chaotic mess of love interests will get even more convoluted. I wonder how Sio will react if she finds Gaudi’s new prized possession… 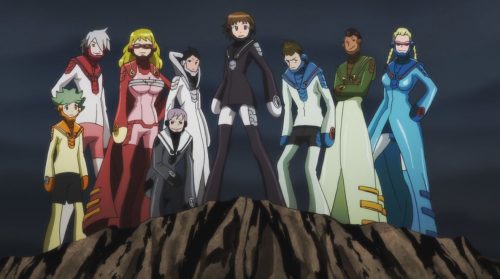