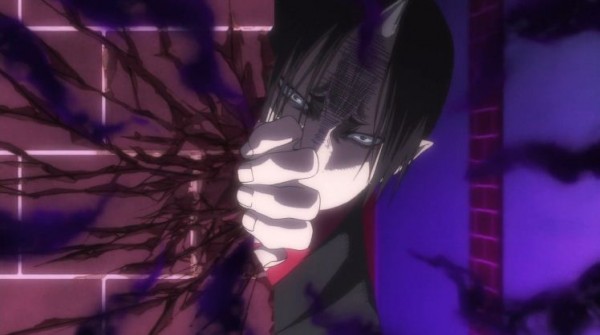 Another week, another episode and I’m so glad because I cannot get enough of Hozuki No Reitetsu. Welcome back to another installment of Hozuki No Reitetsu Anime Impressions, I hope you’ve all been as excited about this new episode as I have! This week marks the release of Hozuki No Reitetsu episode eight: Hell’s biggest idiot, Koban the cat journalist, and hell’s number one artist, Nasubi the Hokusai fan, take the spotlight in this weeks episode which tells us to follow our dreams into greatness and, if you come across Hozuki more than once, you’re one unlucky son of a gun! Step into Hozuki No Reitetsu episode 8 with me where some journalists just don’t know when to quit and some painters are so talented it’s like their artworks literally jump off the page! 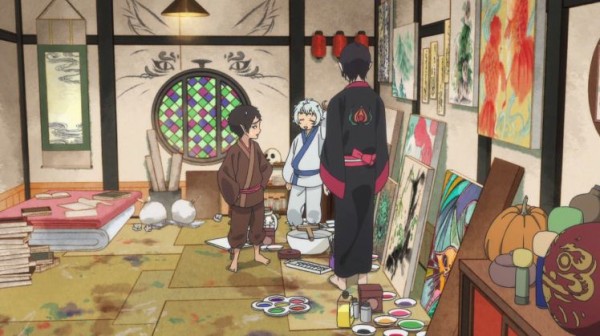 Koban is back once again to wreak journalistic havoc on poor, little Peach maki who’s album has just been released, Koban sees this as the perfect opportunity to catch the popular star doing something odd or outlandish. Koban, if you don’t remember, is the cat journalist who caused trouble for Peach Maki once before but, with the help of our friend Hozuki, he was quickly scared off…clearly he didn’t learn his lesson. He heads out to stalk Miss Maki but inevitable runs into Hozuki which we all know means bad news. True idiots are people who don’t learn from their mistakes and it’s clear that Koban is hells biggest moron. 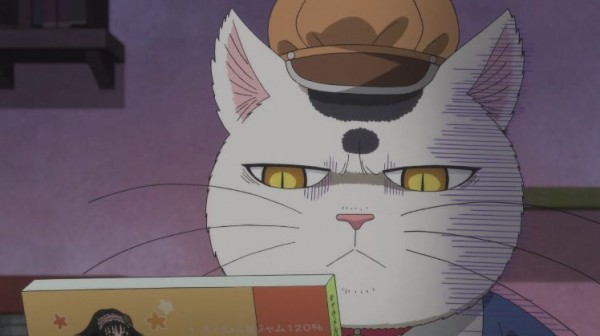 He tries to bait Hozuki and Maki into creating some sort of love scandal just so he can nab a scoop but Mr. Hozuki quickly puts him in his place and makes the ulcer left in his stomach from the last time they met double in size. This was one of the goofier episodes with the return of the naked old hag and her dreams of being a pin-up model. With references to “Puss In Boots”, “The Smurfs” and “Felix The Cat” how could you not love this show?

The thing I love most of all about Hozuki No Reitetsu is the personification of these animal characters and the way they interact; it’s so standard, so normal and apart from the odd “bark” or “meow” they’re pretty much the same as the human-type characters. I’m also finding Hozuki himself to be funnier and funnier as each episode comes out, his stern faces and the dark vibes he gives off are some of the funniest things I’ve seen in comedy anime titles and I really hope he continues to get funnier. Also, just as a little note; they actually used Peach Maki’s song from the episode as the ending theme this week, whether or not it continues on in the coming weeks is something I can’t confirm. 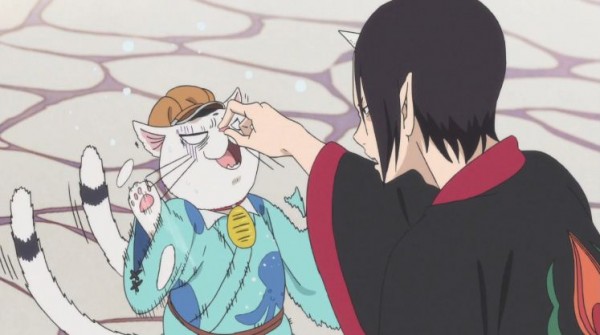 Who knew Nasubi was so damn talented. Our little white-haired demon pal, Nasubi, takes centre stage in this half of this weeks episode as we take a little dive into his private life where we’re shown that he’s actually a damn good artist. Hozuki notices that one of the walls in hell that once hosted a beautiful mural of the rolling spike hills has started to fade away with time, it’s natural since it was done over a hundred years ago according to Mr. Hozuki. Nasubi, the lazy little demon, turns out to be one heck of an artist; painting, drawing, sculpting, carving, the kid does it all!

I guess Hozuki, despite his dark demeanour, is still the type of guy to give credit when credit is due seeing as he actually enjoys Nasubi’s art and asks that he re-paint the mural I mentioned earlier. Obvious Nasubi accepts and takes on the task with gusto but what was so great about Nasubi’s art that Hozuki simply couldn’t move past? I’ll tell you; it practically jumped right off the page. 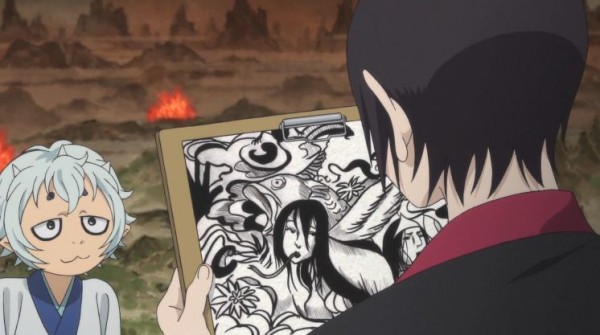 Using some odd demon rock that he found while wandering around hell, Nasubi crushed it up and turned it into a paint that brings to life anything he paints, Hozuki takes advantage of this and gets him to use that particular paint on the mural. After some conversation about Nasubi’s interest in Tatsushika Hokusai’s (my favourite artist) work, Hozuki takes him to his blank medium and they get to work on hell’s next big tourist attraction. I just loved this episode simply because of all the references to Hokusai and his work. He’s an artist I studied back in high school so you can imagine my excitement when he gets brought up, especially when the mentions go on for the whole episode.

We also get a pretty big look into the personal life of Nasubi, a character I would never have suspected to be a talented artist but it seems like in the world of Hozuki No Reitetsu, typical character tropes aren’t necessarily focused on. Episode 8 wasn’t necessarily a funny one but it was a nice one regardless, I enjoyed it more than I enjoyed the first half of the episode which seems to be something really odd that I do every week. Hozuki No Reitetsu looks good and it makes me feel good so I’m going to stick with it for now, if I ever do drop the series, you all will be the first ones to know.