FortressCraft Evolved is the PC port of one of the most popular Xbox Live Arcade titles, FortressCraft. The PC port is currently part of Steam’s Early Access program and the game is in active development. ProjectorGames recently added Survival Mode, moving up the release schedule for the often requested feature. 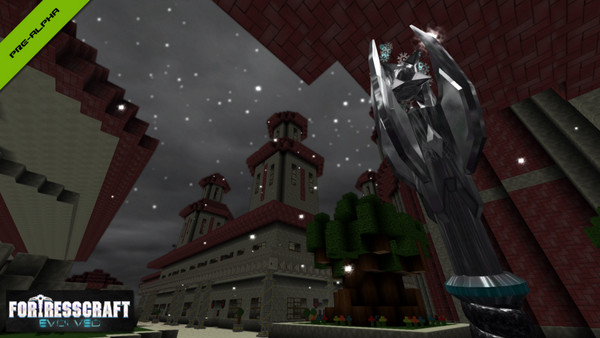 Creative Mode is the more complete of the two modes. Players are given a building gun, a weather wand, and a paint gun to create whatever they can dream of. The building gun can add and remove blocks from the world. The weather wand will allow players to control night and day or change the weather. The paint gun can colour white canvas blocks to any colour the user selects.

Creating large projects is definitely easier in FortressCraft Evolved than in vanilla Minecraft’s creative mode. FortressCraft Evolved has the ability to copy and paste existing structures and automatically build simple shapes like cubes and circles. These features makes it quicker to ramp up the scale of projects and quickly skip over some more monotonous parts of building every block by hand. The developers are looking to implement Steam Workshop support that will allow players to upload their creations onto Steam so other users can add them into their world. 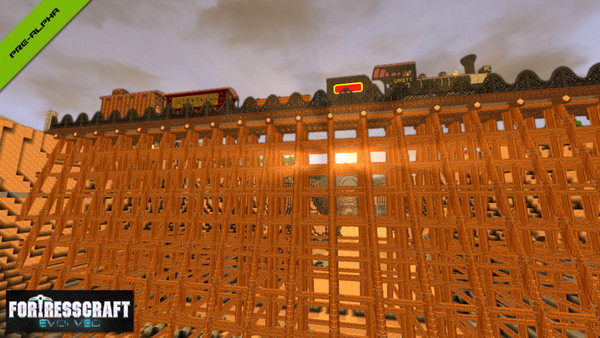 Survival Mode is a constant battle between the elements. The players has a special suit that will protect them from hostile environments like extreme temperature conditions and toxic waste at the cost of power. Players are armed with just the basics: a small base that will allow them to generate some power with coal, a smelter to turn mined ore into bars, some mining machines, a manufacturing plant, and a few torches to keep warm. The next couple minutes will be spent furiously looking for a coal vein to drop the mining machines onto, while the sun keeps the planet relatively warm. Once the sun drops, the temperatures become frigid as the player fights off hypothermia. Coal will help keep the suit powered while there is no sunlight to provide extra energy to charge batteries. It is extremely inefficient to mine by hand, so mining machines will do the brunt of the work while players hunt for new veins and ferry power to different machines. From there, it becomes a quest to find the right ores to build more machines to make life easier. 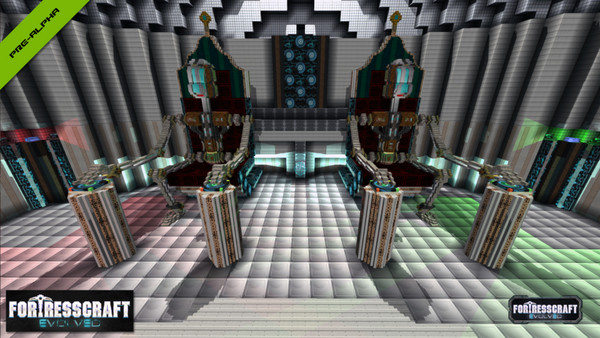 The idea of surviving against the elements is a nice new take on survival. The temperature system is a neat idea, though could use some tweaking. Standing by torches can help players keep warm during the frigid nights, but finding that “sweet spot” that will allow players to stay indefinitely in the same position without overheating or getting to cold is very difficult. Based on the machines currently available, it looks like ProjectorGames has drawn some inspiration from Minecraft’s vivid modding scene for direction, while adding their own twists.

Currently, it is very obvious that FortressCraft Evolved is early in its development. Although the game runs surprisingly well, with few only hiccups, there are some obvious bugs and lots of placeholders. Blocks may randomly disappear, menus are full of under construction signage, and most importantly, multiplayer has yet to be implemented. The game is in a rough state, but definitely playable in creative mode at the very least. Survival mode was just released to the general public as of the writing of this article. The basic framework in survival mode is there, but content is short as there only the first tier of machines are available for testing. 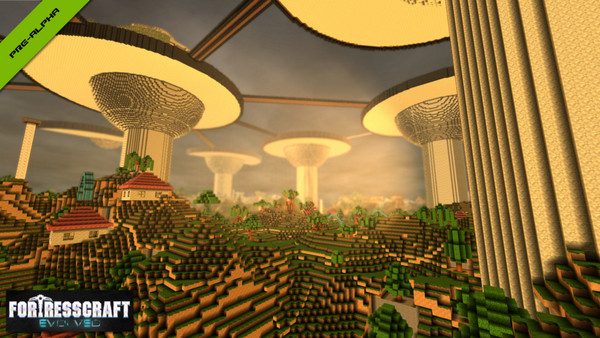 Graphically, FortressCraft Evolved is a high resolution take on the voxel style. The game is bright and colourful. Hopefully, the build gun is a placeholder, as I found it looked a little cheap in comparison with the other models in the game. I like the fact the menu is built around a 3d factory, versus the traditional 2d menu. It’s a nice small touch.

On the hardware side, the game runs well, even this early in the develppment. Creative mode has a great bar in the UI that shows the server’s progress in populating the world with blocks, which will explain some slowdowns. There are 32-bit and 64-bit versions of the game to utilize modern computers with more than 4 GBs of RAM. Currently, FortressCraft Evolved only supports Windows, but Linux and Mac support is in the works.

There is little in the sound department at the moment. There is the odd song that will kick in and a few basic sound effects. It seems like the rest of the game, the sound is still a major work in progress in FortressCraft Evolved. 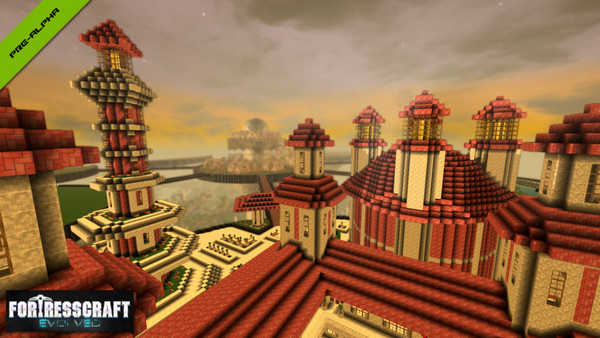 FortressCraft Evolved is a major work in progress project. It has the makings of being a great alternative to Minecraft, especially for those who are looking for more powerful tools for creative building. There are some interesting ideas blossoming in Survival mode, but it is too early to tell what will become of it. $5.99 to participate in the Early Access and to get the full game when it is released is a very affordable price for those who just can’t get enough of the voxel genre.