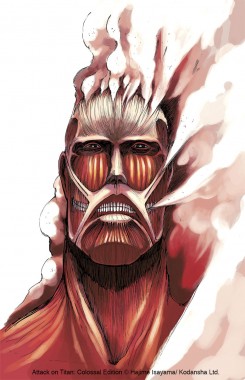 Kodansha USA, the North American manga publishers most famous for series’ like “Air Gear” and “Sailor Moon”, announced yesterday that they will be re-releasing the extremely popular “Attack On Titan” manga but with a colossal change. The publisher has plans to release omnibus editions of the manga which will be titled; “Attack On Titan: Colossal Edition”.

So far only the very first omnibus has been announced, it will contain every single page from the first five volumes of the series and will physically be a great deal bigger than your standard issue manga releases. Kodansha USA have stated they they plan to release it on the 27th of May and that the “suggested” retail price for the omnibus will be about $59.99.

As of right now only the North American release date has been announced but I’m sure we’ll be hearing more about its release elsewhere soon enough. Keep your eyes on the site for any and all new information as it is released.