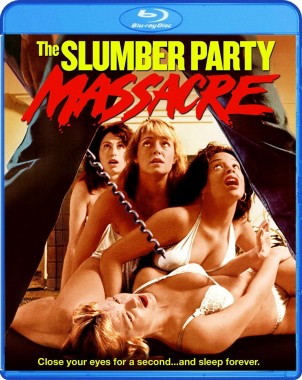 A long time ago, I was graced with a rental from Blockbuster. You see, back then I was watching every horror movie VHS I could get my hands on, and when The Slumber Party Massacre made its way in my VCR, I fell in love with one of the campiest, yet enjoyable slasher films from the 80’s. Thanks to Scream Factory, The Slumber Party Massacre will be seeing a revival on Blu-Ray with some fantastic special features in tow – set to release on March 18th.

Here are all of the drilling details:

This March 2014, loyal fans and horror enthusiasts are invited to join SCREAM FACTORY™ for the ultimate sleepover when Amy Holden Jones’ THE SLUMBER PARTY MASSACRE, starring Michele Michaels (Death Wish 4: The Crackdown), Robin Stille (Sorority Babes in the Slimeball Bowl-O-Rama), Michael Villela (Wild Orchid) and Andree Honore (Strange Reality), debuts on Blu-ray™ for the first time on March 18, 2014. This highly collectible Blu-ray edition features new high definition transfer and killer bonus content. A must-have for all slasher fans and movie collectors, this definitive Blu-ray release of THE SLUMBER PARTY MASSACRE is priced to own at $24.97 SRP.

When Trish (Michele Michaels) decides to invite her high school girls’ basketball teammates over for a slumber party, she has no idea the night is going to end with an unexpected guest – an escaped mental patient and his portable power drill – crashing the party in the cult classic, The Slumber Party Massacre. 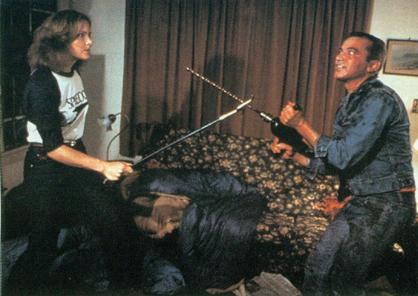 You can pre-order The Slumber Party Massacre here from Shout! Factory‘s official website, or snag it off Amazon by following this link. If you consider yourself a horror movie fan and have yet to witness one of the overlooked greats of the genre, you owe it to yourself to give this release a thorough viewing. It may not be the scariest, but much like other gems from the decade such as Psycho II and Prom Night II: Hello Mary Lou, it certainly made an impact in its own unique way.