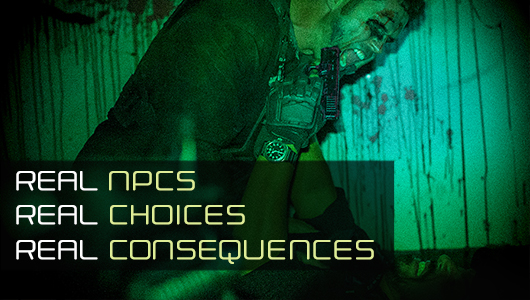 Makers of the world’s first live action First-Person-Shooter (FPS) game, Patient 0, are planning on setting up shop in Sydney in the coming year, and to do so they have started collecting money through crowdfunding. It turns out that for all the awesomeness that is the world’s first live action FPS, said awesomeness didn’t translate so well into cash and so the developers have resorted to crowdfunding for the next installment. The indie developers, IRL Shooter, are currently offering backers a variety of rewards ranging from a shirt to having your own NPC character created in the universe of IRL shooter. They intend to sell 10 000 tickets in order to acquire the funds they need to cover the costs of running the game. These include things like venue acquisition, equipment, NPC wages and insurance (because zombies need a roof over their heads and dental care too…).

We covered the development of the original Patient 0 back in Melbourne in a previous article, but the developers claim they have much more to add this time around for the game in Sydney including greater “immersion”, achievements/unlocks, and customisable tactical loadouts. Some aspects of the game will remain constant such as retaining the setting of a warehouse filled with zombies, although one hopes that with the sequel these developers will let players have their mayhem with new level design.

You can find more info about this installment and pledge your support in the (I hope) franchise on the crowdfunding page for the installment here, alongside links to behind-the-scenes and gameplay videos for those are especially interested. In the meanwhile, here’s a teaser video: