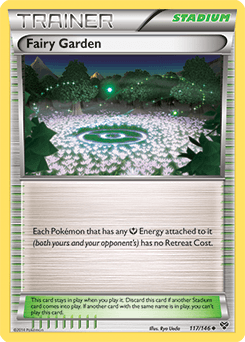 Based on the latest installment in the mainstream Pokemon franchise, the Pokémon Trading Card Game is set to receive a new addition itself. The aptly named Pokémon TCG: XY, is set for release February 5th and will see the inclusion of a number of new elements in the Pokemon mythos.

With the advent of the game changing Mega Evolution, it was only a matter of time before the turbo charged monsters made their way from the Nintendo 3DS into card form, ready to duke it out in detailed paper form. In other Poke-revolutionary news, the TCG will also incorporate the brand new 18th type: Fairy. Just as it has in the games, the new type will serve to shake up the balance and cause players to rethink some of their more beloved strategies.

Be sure to keep an eye out in stores for the 10 card Pokemon TCG: XY booster packs, a try to net yourself a Mega Evolution. Check out the pictures below for a taste of what’s to come.