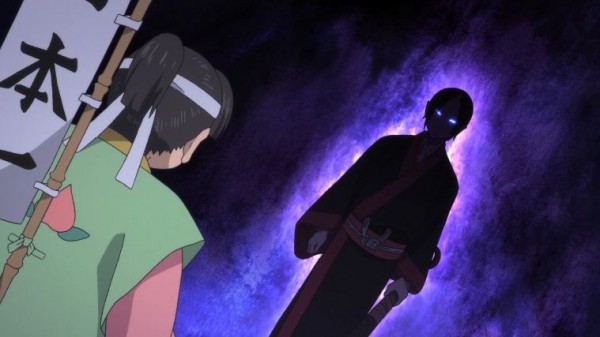 Hell surely is the place to be! Pop Culture really romanticises the afterlife and the concept of eternity in a way that scriptures can’t. Hozuki No Reitetsu follows a demon, or “Oni“, that works as the “secretary” of hell, basically the guy is second in command under King Enma who you may all know moreso from the legendary series Dragon Ball Z rather than the literal legends that have been passed down the ages and I think that’s perfectly fine. Hozuki basically overlooks Hell and makes sure everything is going smoothly…for the demons working…as for the tortured souls, well, I can’t say things are going smoothly for them at all.

Hozuki No Reitetsu is a dark comedy that has an oddly real view of what hell would be like yet twists it up with semi-human problems that we can all somewhat relate to but, from what I’ve seen from the first episode, it is ready to take episodes in all different directions and it is not at all afraid of swiftly changing pace. It seems as though episodes will be broken up into two segments, both of which will still follow the main cast but will show us different stories to do with them that wont directly continue off from the previous story but small signs in the background suggest that it does. For my Impressions I’ll be separating both episode stories and I will talk about them individually so as to get the most out of the short experience. 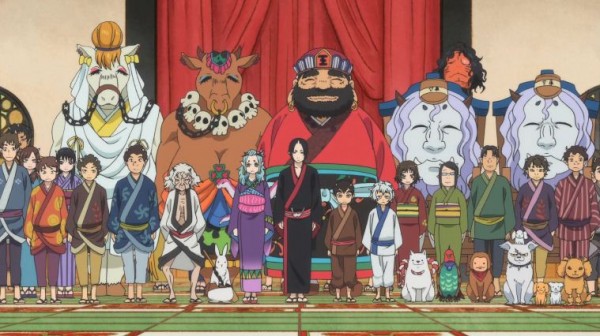 This being the first episode you can assume that the first few minutes were character introductions, they were exactly that but they did it in a nice subtle way, it was almost like they threw to the characters already in-story rather than introducing them and then proceeding with the story and I quite enjoyed how it went. I suppose it being a short half-episode story meant that they had to be quick about certain things while also keeping it in a certain flow that would have the audiences attention and I’d like to say they did exactly that.

King Enma is overrun (this is how he was introduced), his office is filled with people who need problems solved from all around hell and, as usually, he palms them off onto Hozuki who is currently doing the rounds. I found the way they went about this episode to be very intelligent and quite clever, Hozuki was presented with a few little problems that would add up to a fairly big problem in the long run. 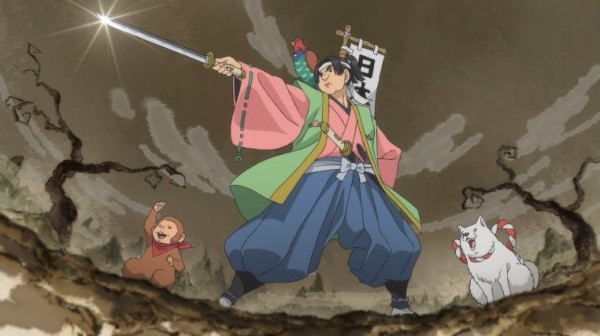 There’s a lack of workers in the animal torture section of hell, Shangri-la (a place of positive energy) is having some sort of peach problem that shouldn’t concern a worker of hell anyway, and there’s a rogue samurai spirit that is causing trouble around hell. This is a slice-of-life series so the problems weren’t resolved with an action sequence or a huge fight, instead it was solved with well-timed humour and was put across fantastically with on-the-mark voice acting.

The samurai spirit was accompanied by three animal familiars who, once he was dealt with, were put to work in the “Animal Torture” section of hell which actually solved two of three problems, the third problem was solved when the samurai spirit (who was clad in what seemed like a peach-themed samurai uniform) was sent to deal with Shangri-La’s peach problem. The small segment was wrapped up so nicely and everything came full circle, that along with some great writing hooked me in to continue watching the second half of the episode and that, well, read on. 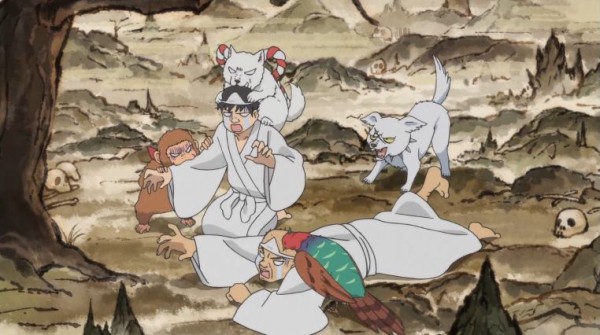 The Discovery Of Hell’s Mysteries:

This half of the episode made the change of pace that I mentioned in the first paragraph of this article. It wasn’t as though it went from comedy to action or from slice-of-life to horror, it stuck to the roots it had planted in the beginning of the episode but what really got changed was the vibe. This half-episode is so easy to condense into a synopsis because it basically had Hozuki and King Enma sitting down to a meal at a local restaurant, watching some TV and having some Seinfeld-esque conversation, it was so simple yet worked brilliantly.

This episode continued to prove that this series is going to be a hilarious one because the writing alone was fantastically clever yet silly and the voice actors chosen clearly made their bones in the recording studio because it all just came across lightly, I don’t speak a lick of Japanese but speech is speech and you can tell when a voice actor give it their all. They somehow made a 10-minute conversation so entertaining, in any other Anime I bet audience members would sit there and wait for something flashy to happen but with Hozuki No Reitetsu you just relaxed and let the laughs roll in. 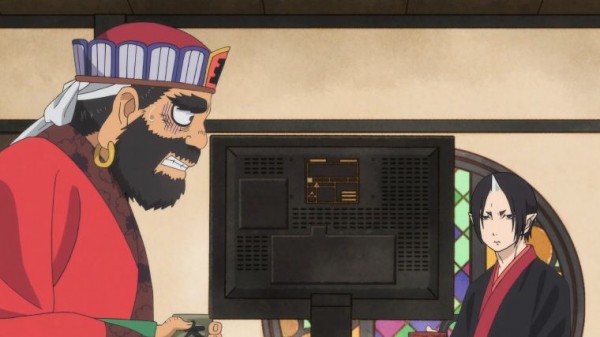 Now I mentioned the “Seinfeldian” conversation the two demons were having and I believe it really was that just on a supernatural level; pets, women, even Australia got some huge mentions as they were watching a documentary on “Mother Earth’s Bellybutton“. Nothing was too “off-topic” for Hozuki No Reitetsu, even the things that I’m sure the audience felt were like how Hozuki believes Koalas to be “huggable” and how Kangaroos are quite “dull”, he even mentioned his dream woman would be one that could get strangled by an large snake but not make a big deal out of it, everything was in good fun.

Even background characters got a giggle out of me; just seeing the animals from the first half of the episode make an appearance as they sit down at the restaurant and eat dinner just like any other customer was just so funny to me especially because it strictly happened in the background of the episode. Hozuki No Reitetsu has, in one episode, proven that it is going to be one of my favourite series’ this season and possibly even this year. 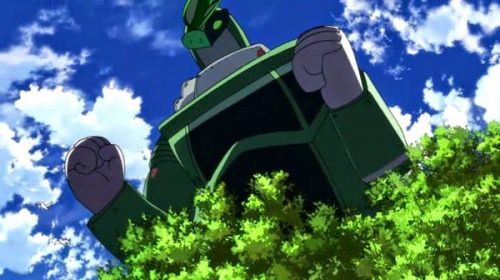