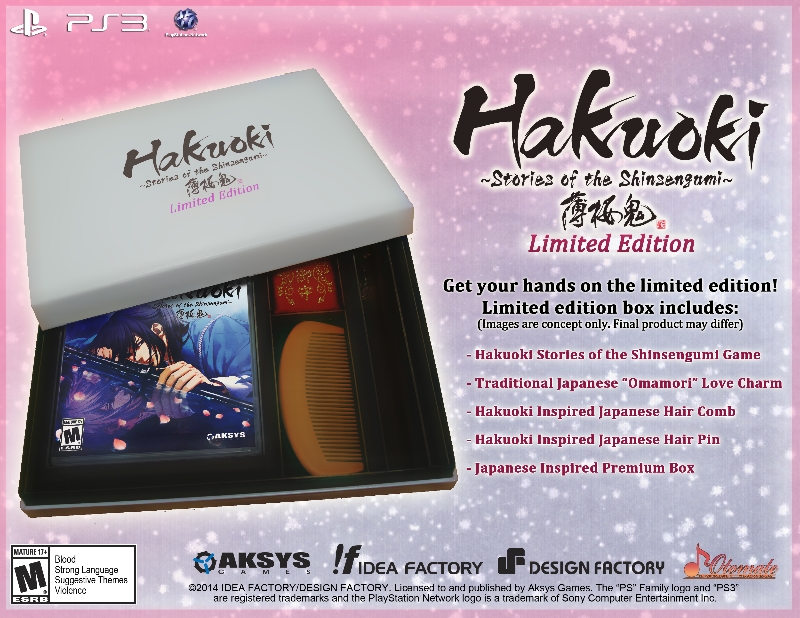 The “Hakuoki” series has blessed us in so many ways as it reappears time after time in different ways shapes or forms. From light novels to anime and even gaming; “Hakuoki” mixes rich Japanese history with a level of romance in a way that you probably would or wouldn’t have (depending on how much anime you watch) seen coming. Aksys Games are extremely pleased to announce that their  recent “Hakuoki” game titled; “Stories Of The Shinsengumi” has just gained itself a nice little Limited Edition version that is now up for pre-order.

The “Hakuoki: Stories Of The Shinsengumi” Limited Edition version will, obviously, come with the full game as well as a premium box which looks as though it was hand-made and laced with Japanese lacquer, a comb and hair pin set both of which are quite remniscent of the “Hakuoki” series, and a traditional Japanese love charm also known as a “Omamori” which has been embroidered with the “Kitan” stamp.

All these things will help you find the perfect samurai lover, a calibre of which you’ve only dreamt about up until now. The game is set for a release on the PlayStation 3 sometime within the year, though we don’t have an exact release date at this point in time. It is available for pre-order now at all good game retailers including Amazon and GameStop so head there now to grab yourself a sweet limited edition copy of “Hakuoki: Stories Of The Shinsengumi”. I know I will!