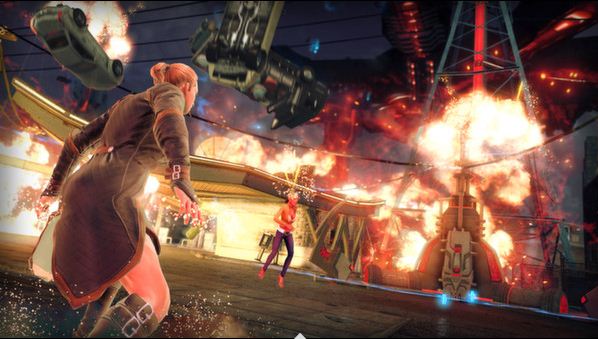 – Contrary to popular belief; Looking INTO an explosion is much cooler! –

Deep Silver has just released the latest Saints Row IV DLC pack and, much like a lot of the other packs, it’s full of explosions, it’s full of destruction and it’s full of carnage! The “Element Of Destruction” DLC Pack is one that focuses highly on making things that shouldn’t explode…explode. Powers like the “Explosive Chain Blast” allow for a domino effect of explosions to occur once the power is used, the “Explosive Buff” turns everyone around you into a living stick of dynamite, the “Telekinetic Time Bomb” not only lets you use psychic powers to lift and throw people but it also turns them into…well, a time bomb and the “Airstrike Stomp” sends enemies flying into the air while the earth below gets peppered with missile strikes, what more could you honestly ask for?

– Click image to head to the DLC Steam Page –

The “Element Of Destruction” DLC Pack is available for all the systems that Saints Row IV can be purchased on, that means PlayStation 3, Xbox 360 and PC players can all get the new pack and it will be selling for $2.99. It’s available now but if I failed to convince you to head over right now to purchase this pack than maybe an Official Trailer for the DLC will, the trailer can be seen below in our Featured Video Section and don’t forget to head down below that to our comments section to let us know what you’re thinking. Stay crazy, all you Saints, it’s time for a bit more destruction!