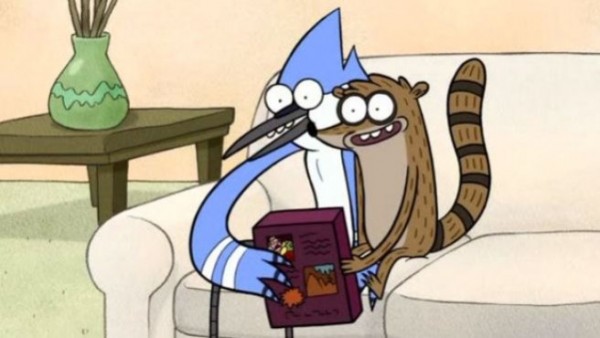 Oooooooooh! Join Mordecai and Rigby on one of their greatest adventures yet with the release of their first and, so far, only 3DS game; Regular Show: Mordecai and Rigby In 8-Bit Land! Namco Bandai Games have, today, released the 3DS-exclusive game in the UK and, as a fan of the Emmy Award-Winning series, I’m super excited for them! The game has been released over here in Australia it seems and now it’s available all over Europe too! Unfortunately for North America they’ll be waiting until the 29th of October, sorry “fellas” it looks like we beat you too it!

The game is developed by WayForward and puts the lazy duo in all different, crazy and old-school situations and game types, from platforming to shooter you can do it all in the Regular Show game. That great thing about it is that, not only was it developed by WayForward, but it was also in collaboration with the series creator and voice of Mordecai; JG Quintel. I can’t wait to get my hands on this game and I bet a lot of you cartoon fans are feeling the same. For now we have some cool screenshots from he game and a launch trailer alongside them that you can enjoy before you pick it up.