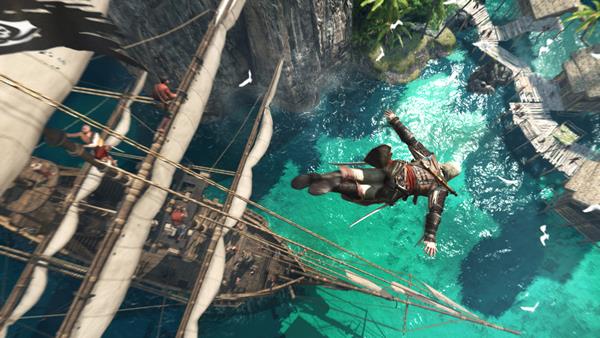 Stunning, yet dangerous – the Caribbean Sea in 1715 was the perfect playground for pirates; none more-so than Captain Edward Kenway, in Assassin’s Creed IV: Black Flag. After getting our hands on the Naval & Fort demo at the EB Games Expo 2013, Ubisoft Australia invited us to experience an extended open world demo of the PlayStation 4 version, where we made new eternal enemies with a certain aquatic life-form…

Jumping straight into command of the Jackdaw, we soon docked at the Andreas Island port. Now, you may have seen some of the interactions described here in a previously released video walkthrough by the developer, but overall, we spent an hour+ roaming the seas and exploring beyond the key locations featured in said video. To begin with, however, we are immediately shown that our presence is unwelcome and proceed to engage in a familiar bar-fight. The hand-to-hand combat system shares 95% of the former titles’ DNA, until the multiple swords and pistols come into play. That being said, don’t expect a lazy inclusion of past animations; Edward has some new, visually brutal finishers up his sleeve. 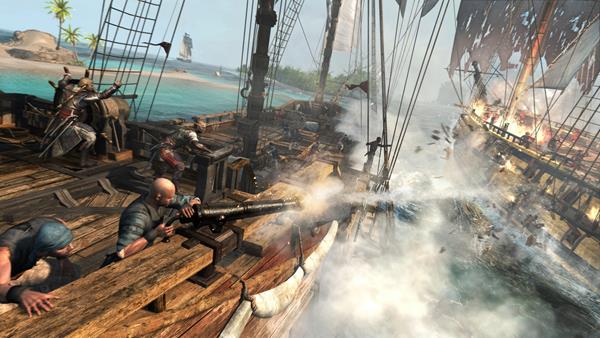 Everything costs Reais (Brazilian real) in the West Indies, from a simple drink to upgrading your ship, gathering information and recruiting crew members. In regards to the latter, that is of course unless you board an enemy ship and absorb their crew into yours, or rescue a drowning/wayward drifting privateer out of the deadly ocean. Alongside taverns and viewpoints, assassin contracts are strewn throughout the various islands. After accepting one on Andreas island, the Templar target promptly sails in with his “entourage” on what appeared to be a gold-painted ship. Visible from the bay, but out of shooting range, we chose to have some fun and blow a berserk dart in the neck of one of the guards at the bottom of the boardwalk.

Although hidden among some shrubbery, the erratic behaviour of the guard scared off the target, who sailed off at top speed. We gave chase, leading into some naval combat. This go around – as opposed to our Naval & Fort playthrough – we made sure to utilise the mortar for high damage. That being said, we didn’t want to completely destroy the frigate so that we could properly pillage it for resources upon boarding, which is something players will have to constantly consider should they require resources, man-power or repairs – your three options upon victory. The best way to avoid accidentally destroying an opposing ship is to shoot chain shots at their masts by aiming down the Jackdaw’s bow and firing with ‘R2’. 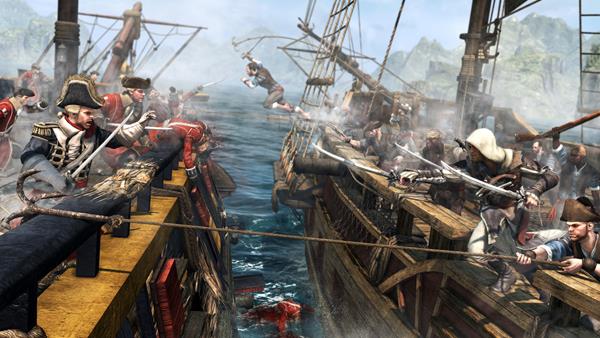 The player always has options when it comes to tackling different activities, which is one of our most appreciated aspects of the game. As a more minute example, we decided to take out the Templar target by way of our swivel gun stationed at the railings of the Jackdaw. Imagine taking a cannonball right to the gut… he can’t, because he’s dead (got a little gruesome there, geez). Otherwise, a full frontal assault, assassination by air and other various means are possible in accomplishing the same goal. In staying on topic with naval warfare, when attacking particular colonial ships, other objectives may arise, such as “destroying” their flag… destroying is in quotation marks because Edward disappointingly unties it and lets it drop, though the prompt says “destroy”. Where’s the dramaticism?! Burn it I say!

Moving on, we came across the Antocha Wreck. In relation to points of interest found during naval navigation, dockable zones are signified by a highlighted patch. In the case of shipwrecks like these, holding “O” to do so will initiate the release of the Diving Bell – provided you have acquired it, as it is not unlocked from the very beginning. Edward then dives on after it, submerging himself inside it where pockets of air allow him to catch his breath and remain safe from the vicious sea creatures surrounding him. Once you leave the bell, there are also Air Barrels which allow a one-time use refill of oxygen, which becomes necessary if you attempt to find and loot all 7 treasure chests in the vicinity in one fell swoop. 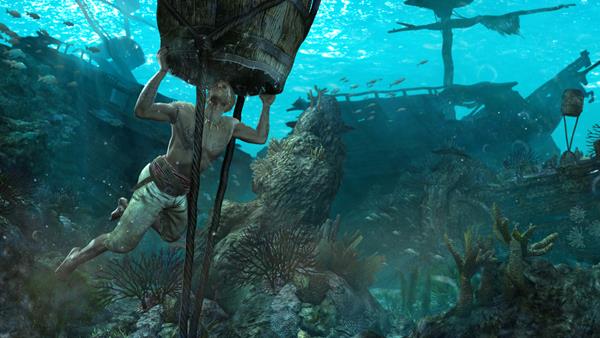 The underwater gameplay is entirely unique, with the abilities to lunge up using “X” and boost off of broken masts and hard surfaces for the purpose of a quick escape from the pesky great white, or to just cover larger ground in getting from one treasure to another. When hidden, Edward’s colour fades much like when you are blending in amongst crowds on land. Seaweed can also be used for stealthy cover from predators, although with so few video games implementing this sort of variation in underwater segments, we found ourselves instinctively (and stupidly) ignoring them as purely dressing/level decoration. Even more frustrating than the persistent sharks were the sneaky moray eels… our new mortal enemy. Time after time, we got surprised and bitten by the overgrown piranha wannabes… yeah, we said it!

Satisfied with 6 out of 7 chests looted, we resurfaced from the Diving Bell – which also rejuvenates health – and returned to the Jackdaw. Notice the aforementioned animus fragments, by the way? Consider them the new collectible in the vain of feathers and the like… what they unlock upon completion (if anything), we don’t know. We are holding out for a First Civilisation memory like ‘The Truth’ found in Assassin’s Creed: Brotherhood. Now, you’d think we’d want nothing to do with sharks any more after being mercilessly munched on, but you’d be wrong. Time to go harpooning we thought! This is the moment where you call PETA on us… oh, they already complained? Typical… 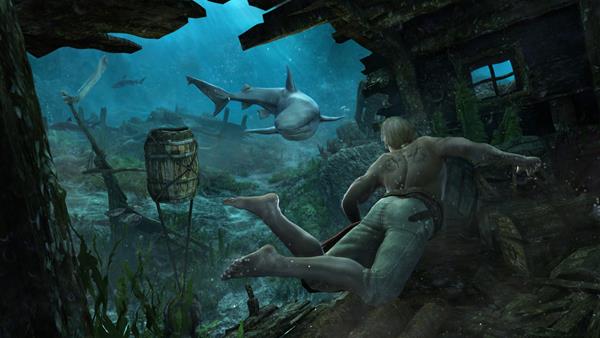 Clicking in the Dualshock 4’s touch pad brings up our map, which we can then manoeuvre around with the movement of our finger. Pinch and zoom functionality has also been implemented in order to get in tight or blow-up the view of the map. Sensitivity was high when using the touch pad – which is completely optional – although we are assured that, just like a mouse’s sensitivity can be changed in the options menu on a PC game, so too can the touch pad’s. We spot a shark harpooning opportunity in the distance, but it’s not for any common shark… it’s a flippin’ hammerhead! We were so ecstatic at the chance to catch the rarity, that Edward incited the crew to start singing their favourite sea shanty, of which there are many the player can choose from using the D-Pad whilst sailing.

Once we arrived at the spot and landed our first harpoon, the hammerhead makes sharp turns in direction, frantically trying to break free, which it eventually does (on numerous occasions). After a number of violent rams by the angry fish, and a mighty struggle, we dramatically fell the beast with our final remaining harpoon, of which we started off with 20. A short cut-scene rolls, displaying the crew hoisting it up in celebration. The appropriate resources were then allocated. Apparently the hammerhead was double the size of the usual shark inhabitants… we’re pros, that’s all. Which is precisely why we then felt confident enough to sail right into a brewing storm. Okay, it ended up just being a heavy blanket of fog, but we were fearless nonetheless! 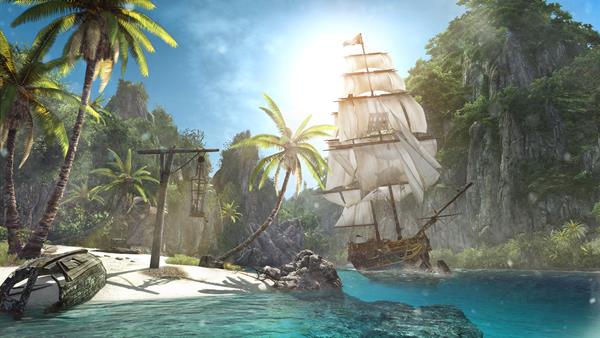 Before finishing our demo by witnessing the Spanish and the British warring on the beaches of a Salt Lagoon, we wanted to tackle the Jiguey Cave. On the trip there, we picked up some floating loot, lost a man overboard (at least we think… we just saw a guy randomly drop from the sky!) and had a run-in with some pirate hunters. These nasty pieces of work are basically the law of the sea… blood-red dyed ships that can take an explosive barrel head on like it was nothing and continue the pursuit, which is exactly what happened. In our case, luck was on our side as we evaded them with relative ease and continued on our merry, drunken way – still singing too. Soon enough, we arrived at the smuggler’s den that is Jiguey Cave.

We deftly approached with a stealthy sub-surface swim before climbing a rickety structure, picking up an errant explosive barrel and throwing it down at two unsuspecting smugglers. This sent the other half dozen or so into inspection mode, but to no avail. We progressed in taking them out, one-by-one, by air, berserk darts, melee takedowns (the helpful whistle from cover is back!), hidden blade attacks and executions from shrubbery – it was an expert display of skill if we do say so ourselves. It’s actually a surprise to even us, after hearing how loud the echo was in the place… it was ridiculous! Grab a handhold on a climbing surface and the sound reverberates as if you stomped on the wooden floorboards with all your might. 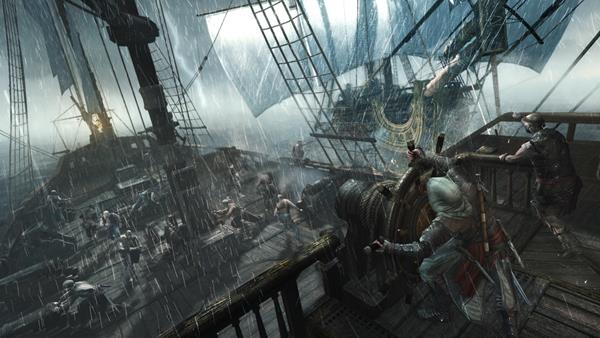 Amidst the chests and animus fragments was a ‘Secret’, which turned out to be a message in a bottle on the shore outside the cave’s entrance. Unfortunately, we could not access the full menu in this unfinished build to see what it exactly pertained to, but we believe it to be a part of a map to a hidden location somewhere in the world. Speaking of, completed areas are marked on the world map by their white-turned-golden hue so that you know where you’ve been and what’s left to accomplish/visit. The West Indies is broken into sections as well. Without discernible borders, the name of the territory at the top of the screen will change to identity them, with the difficulty level of each scrawled to its right.

And so our extensive session with Assassin’s Creed IV: Black Flag came to a close, and we left genuinely more excited than ever to pick it up when it releases in a mere 3 days, on November 29. It goes without saying that the PlayStation 4 version looks astonishingly good. Its combination of all the better elements from past titles (although we miss the historical glyph puzzles from Brotherhood) with the always charismatic, magnetic theme of pirate life, is proving a winning one. This could quite possibly be the greatest Assassin’s Creed entry yet. In fact, we’ll bet our peg-legs and gold teeth on it. Now we must wait for release to discover the intriguing – and so far missing link – the present-day gameplay at Abstergo Entertainment. Stay tuned to Capsule Computers for our full review soon.