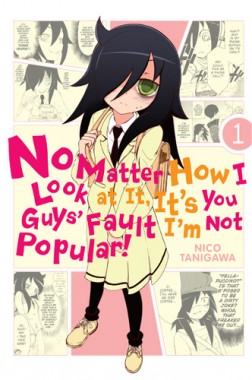 Yen Press have just released details of their English language release of the popular Watamote manga series, which they will be releasing under the completely translated title of No Matter How I Look At It, It’s You Guys’ Fault That I’m Not Popular.

Along with the cover-art for their first volume release of Watamote, which can be seen to the right, they have given a solid release schedule for the series. Volume 1 will be released in October 2013, Volume 2 in January 2014 and rounding it up with Volume 3 in April 2014.

Stay tuned for further details on the English release of the No Matter How I Look At It, It’s You Guys’ Fault That I’m Not Popular manga as it comes to light.