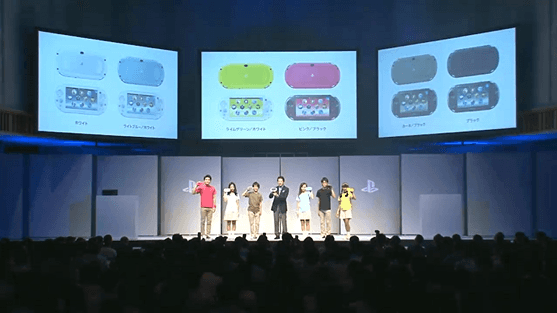 A conference in Japan is happening today in the capital city of Tokyo and a new PlayStation Vita model has been announced. The new model is called the Vita 2000 model and will come in six different colours (as pictured above) and is thinner and lighter than the original model. The data transfer connection has been changed to a micro USB connector and battery life has been extended by an hour. In addition, 1GB built in memory will be included for save files. Interestingly, the 5 inch OLED screen has been replaced with an LCD screen. The new Vita model will launch on October 10 for the price 18,980 Yen. Some bundles are also being announced, one being a Gundam Breaker bundle with a special Vita design. Hopefully this can spark some life into the struggling Vita sales. A 90 day trial download code will come with all purchases of the new Vita model.

A new 64 GB memory card is also being made avaialable. Sony is noting these announcements are specifically for Japan but I am not doubting that both the new Vita model and memory card will also be making their way overseas in the near future. Stay tuned to us for all the new announcements coming out of the Japan conference.

Will Sony Have 20 New Gaming Experiences At E3?