Walt Disney ABC Studios has detailed its Australian home video DVD/BD releases for the rest of 2013, with a few offerings that fans of trending TV shows might want to pick up. From Grey’s Anatomy to Criminal Minds, check out the full list below to see if anything catches your eye!

It’s a year of bold new beginnings as your favourite doctors return to Seattle Grace for the biggest challenge of their lives. Experience every breathtaking moment with all 24 episodes of ABC’s Grey’s Anatomy: The Complete Ninth Season. Check out our Season 9 wrap-up.

Emily Thorne returns to the Hamptons with a vengeance. Her enemies may be the same, but her mission now takes on a new, suspenseful twist.  Feel the power of television’s most seductive series, as the action and the passion hit new heights in all 22 episodes of Revenge: The Complete Second Season on DVD. Check out our Season 1 review.

Once Upon A Time (Season 2) 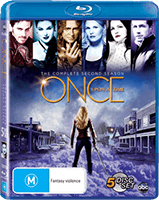 Relive every thrilling moment of the fairy tale-inspired series when “Once Upon a Time: The Complete Second Season” casts its tantalizing spell onto Blu-ray/DVD. The curse is broken, magic has arrived, and there’s no telling what – or who – will be unleashed! Now the exiled fairy tale characters must grapple with a flood of awakened memories as they come to grips with their new “reality.” Old loyalties will be tested, new heroes will emerge, and vengeful villains will wreak havoc.

From the creator and executive producers of Grey’s Anatomy and Private Practice comes a drama revolving around the life and work of a professional crisis manager and her dysfunctional staff. A former media relations consultant to the President, Olivia Pope (Kerry Washington) dedicates her life to protecting and defending the public images of our nation’s elite. After leaving the White House, the power consultant opened her own firm, hoping to start a new chapter – both professionally and personally – but she can’t seem to completely cut ties with her past.

Together at last! After four seasons of sparring and heated banter, TV’s dynamic crime-solving team finds romance in ABC’s Castle: The Complete Fifth Season. Relive all 23 unforgettable episodes, complete with never-before-seen bonus features only available on DVD, in this spectacular six-disc set.

Prepare yourself for the stunning “no holds barred” final season of television’s most seductive medical drama from Shonda Rhimes, the creator of Grey’s Anatomy. Feel the passion and relive the heartbreaking moments from every episode of ABC’s Private Practice: The Complete Sixth Season.

There’s something mysteriously enticing about a “forthcoming synopsis”, isn’t there? Let us know if any of you TV-aficionados are grabbing any of these this year.