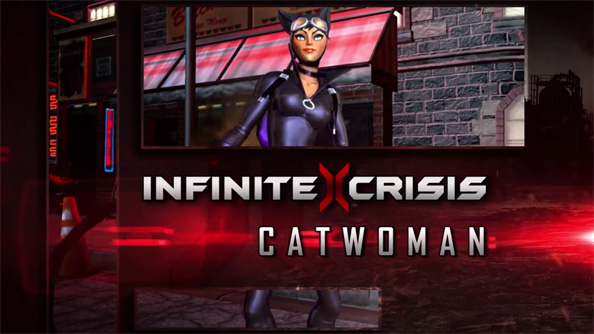 Catwoman turns to the good side and joins the increasing roster in Infinite Crisis, an upcoming multiplayer online battle arena (MOBA) that will be set in the DC Multiverse developed by Turbine and published by WB Games. Catwoman will line up against the likes of Arcane Green Lantern, Batman and Atomic Wonder Woman. Villians will also be playable as the classic DC heroes fight off against their arch enemies in Gaslight Joker, Doomsday and Poison Ivy. Catwoman will use her whip to attack and be able to pull off advanced acrobatic manouvers.

Check out a full rundown of Catwomans skills and abilities within Infinite Crisis in the reveal trailer below. Infinite Crisis is expected to launch on PC sometime in 2013 and is currently in closed beta stage. If you’re wanting for some DC action before the game drops, check out Batman: Arkham City which features Catwoman as a playable character.