Today Atlus USA has announced that they are teaming up with Big Finish Games to bring gamers Tesla Effect: A Tex Murphy Adventure. If the name rings a bell it is because this is actually the sixth installment in a long running PC adventure series that hasn’t been around since 1998. It also might ring a bell since it was originally began as a Kickstarter project.

While this is a surprise announcement, though Atlus has been making a few of those lately, Bill Alexander, vice president of production and business development at Atlus had this to say about the game:

“The Tex Murphy franchise is definitely much beloved around the ATLUS office; a lot of us were playing Tex games before we started our careers in the games industry. Atlus has a great penchant for stepping in to help developers bring their incredible games to market, and we are eager to breathe new life into this classic franchise. We hope that it will bring back fond memories for Tex Murphy fans as well as introduce a new generation of gamers to his one-of-a-kind humor.”

The game is a return to the full-motion video genre and will follow the story of Tex Murphy, a down on his luck “gumshoe” who is working on in a post-WWIII apocalyptic world. The game is currently set to be released on the PC and Mac sometime in early 2014 and Atlus has released a few screenshots for the title which can be found below. 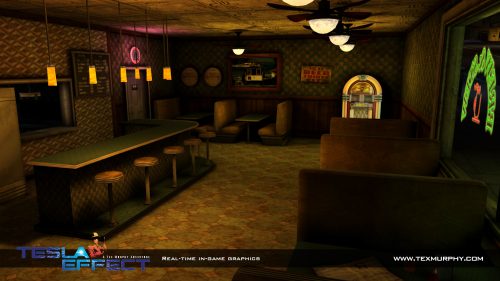