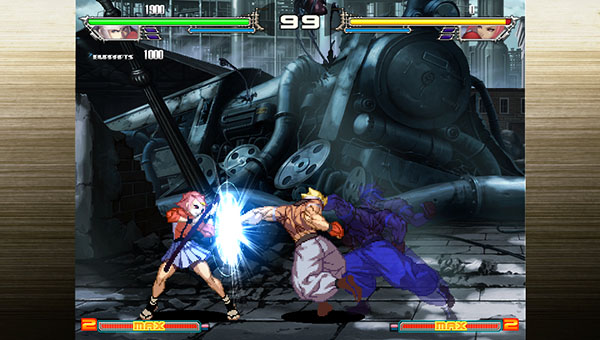 Nicalis has announced it’s bringing 2D fighter Yatagarasu to PS Vita through the PlayStation Network, rebuilt and renamed as Legend of Raven. A batch of screenshots have been released and can be seen below.

Yatagarasu was originally intended for the 3DS, but development was moved due to “the incredibly overwhelming response from the fighting gaming community,” according to CEO Victor Rodriguez. Along with the platform change the developers will “spend time developing new features like parallaxing backgrounds and an original new soundtrack.”

The year was December 25th, 1926. Japan was on the verge of welcoming a new era…the era of “Koubun”.

Instead a revolution broke out, led by those who hoped to revive the Land of the Gods, Japan, and return her to its former glory. The Prime Minister’s cabinet, the police department, the Zaibatsu families, the mass media…the flow of information to the outside world was immediately suppressed.

Out of options, the old government resorted to creating a group of elite assassins, called the “Yatagarasu” in order to maintain order and suppress the rebellion.

These government agents have become known as the “Government’s Dogs” by the general populace. Now, they are on the move towards “Iga-sei”, which is said to still function as the government’s intelligence hub.

Here’s hoping this particular fighter comes to the EU PSN as well, unlike Guilty Gear XX Accent Core Plus R which was exclusive to NA. Check out the screenshots below and for more info visit the official website.

Grinsia Announced for 3DS and PC