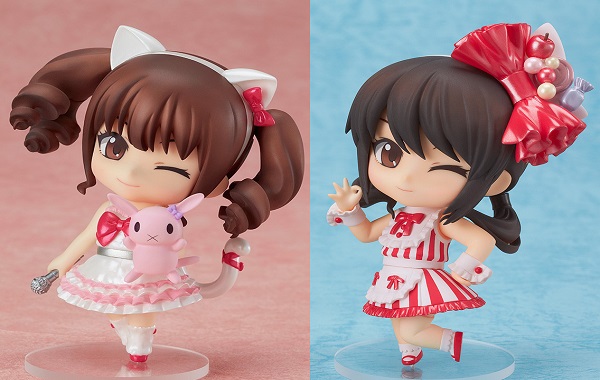 Two famous voice actresses have been transformed into Nendoroids, allowing fans to further show their support for only 4,900 yen ($49USD) each.

The Yukari Tamura and Nana Mizuki Nendoroids were produced by well-known figurine manufacture Good Smile Company, and being sold through King Records who hold contracts with both voice actresses.

You may recognize Yukari’s voice from her roles in Trinity Blood, Clannad and Oreimo whilst Nana has made a name for herself in various anime including Fullmetal Alchemist, Darker than Black and Toriko.

The Yukari figure displays her in a white dress with pink frills, complete with neko mimis, a tail and two additional cat figures wearing pink suites. Nana Mizukis’ figure is just as interesting; wearing a red/white waitress outfit and holding a burger on a tray, the figure is based off the music video for her song “Lovely Fruit” and comes with an additional mascot figure called Nanet-san.

Both Nendoroids will be sold during their live concert tours this year, but don’t fret fans outside of Japan because you can still pre-order Yukari Tamura by clicking the link here. Let us know which one is your favorite by leaving a comment in the section below.