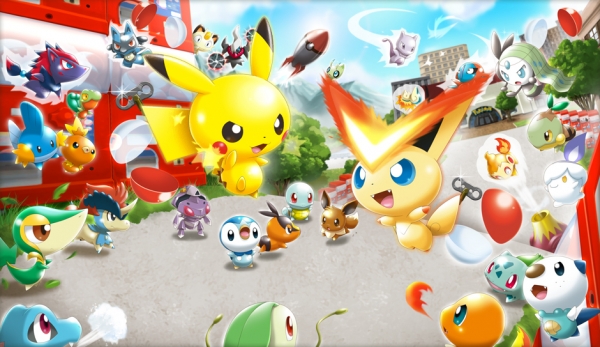 With the first video for Pokemon Rumble U – the newest addition to the Pokemon Rumble spin-off series – came the reveal of a physical element to gameplay. The franchise will feature a line of figures that will be used to interact with game itself, similar to the recent Skylanders series of games. The figures will work with the Wii U’s game pad, utilising the inbuilt near field communication (NFC) sensor to add the character data into the game. As of yet, 7 figures have been revealed with 6 regular and 1 special. The regular figures consist of Bulbasaur, Pikachu, Torchic, Piplup, Lucario and Victini, whilst the special promotional figure is an alternate, stronger Pikachu.

The figures are also customisable in nature. Using points acquired in game, players can increase the strength or alter the attack of a Pokemon and return the new information to the figure. This allows players to use their specialised figure as a miniature save file, granting use of the Pokemon on any system. The game will feature all 649 Pokemon, adding Keldeo, Genesect and Meloetta, who were previously absent from the Rumble series. It will also allow for 1-4 simultaneous players as well as a grand total of 100 Pokemon able to battle at any given time.

Check out the 2nd trailer for Pokemon Rumble U below (Japanese)!