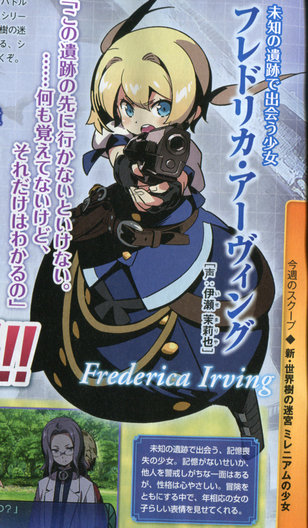 Today Atlus revealed in the latest issue of Famitsu that they are planning on creating a spin-off of the original Etrian Odyssey and are going to be calling it Etrian Odyssey: Millennium Girl. The game will feature an actual protagonist that is a spear-wielder from the Highlander clan who will be voiced. This protagonist is hired by the government to explore ruins and along the way three companions, called Simon York, Arthur Charles and Lacuna Sheldon join the team and along the way they encounter a girl suffering from amnesia called Frederica Irving.

The players will have the ability to change classes and since skill points are limited player customization is a main part of leveling the party. The event scenes will feature party members with various portrait pictures that will actually have expressions on them. The game is currently set to be released in Japan on June 27th and you can check out various scans from the magazine below.