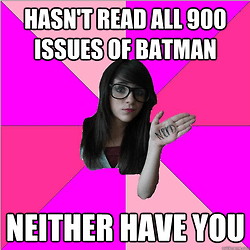 On the 22nd of December, Darkhorse Comics editor Rachel Edidin proposed to have a cheerful coup of the internet nerd girl meme on the joke’s quickmeme.com page. The movement has quickly spread across the lady bits of the internet, allowing disgruntled female nerds to stand up to the annoyance of being labelled as a fake nerd or gamer.

Rachel’s proposal has been re-blogged, liked, and noted on tumblr faster than one can refresh the page to keep track. It has also spread to some parts of reddit where the reaction to this movement is mixed. Some believe this to be a good thing and nice to laugh at, others think it to be too passive aggressive. And even more respond with a resounding “meh”.

With the gaming and overall nerd culture gaining a stronger female community, things like the “idiot nerd girl” meme might not be received as strongly as it once was. The movement of responding against the feeling of sexism and calling women fake nerds is not entirely new. Many comics have been made to joke about the experience.

Get Flirty and Dirty playing games

Feminist Frequency is not a Good Representation of Feminist Gamers