Ever wanted a social networking site dedicated to just gaming to easily keep track of who’s playing what, how a game rates up, and all the latest information on your favorites?  Well, that seems to be the idea behind gamesGRABR, a the new social network designed by TeePee Games set to release in the first quarter of 2013, but opening up registration today for those already interested.

Built to be fully integrated online, as well as smartphones like Android and iOS, so that gamers can add to their collection of games by such simple actions as scanning barcodes from the box with their smartphone camera.  With a game in your collection, friends on the site can view your games or even buy the game themselves.  By working with publishers and developers gameGRABR will have access to thousands of games on the first day as well as allowing for the purchase of the games through the site.

Players interested in signing up now can check out the site HERE and or check out some of the shots in the gallery below. 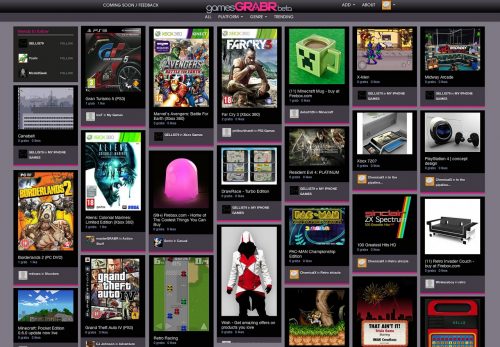