In effort to provide the most up-to-date knowledge in the video game world, Capsule Computers strives to get in touch with those behind the game’s creation. Dark Vale Games opened their doors to our questions and provided in-depth knowledge behind their upcoming class based third person PvP shooter named FORGE.

Question 1: Forge makes for an interesting title. How did this name come to fruition?

We needed a name to fit the overall lore of the game, the backbone of where the game is headed once our initial release is in player’s hands and we transition into expanding the meta-game and MMO aspects of the title. There will be structured battle over a territorial map, one that the player’s shape as they create their own nation, form unions and alliances and ultimately shape the face of a world they all inhabit together. Forge seemed to fit this well, a place of burning heat and friction where creations come to life.

Question 2: When I first saw Forge, I became excited seeing there was a fantasy themed background. What can we expect for a storyline line to develop as the game is strictly PvP?

The further we get into development of the game, the more the lore becomes an important part of why you’re doing what you’re doing, even in PvP. As an example, a game mode we’re releasing soon is called “Labyrinth”. In this game mode, you’ll face off as a raid boss and their minions against standard Forge classes on a round by round basis. These raid bosses are some of the gods that have been released through your play in the game from now until that point. The further we get into the game’s life, the deeper and more powerful the beings released will become, requiring larger teams and more coordinated efforts to defeat them.

It will also influence the new factions that appear, new maps, other new gameplay modes and even the classes that are launched.

Question 3: Starting off in the closed beta, I felt overwhelmed by the amount of skills and jumping straight into the action. What steps are you taking in making the “Tutorial Zone” to combat these feelings?

We walk the player through several aspects of the game in the tutorial map. It’s built in four phases, walking the player through mobility, class specific “special” skills like Shadow Leap and Flame Burst, defense against attacks using block and finally using the remaining abilities in combat. This combined with the in game tutorial tips and ALT tutorial mode where you can hover over every element, it’s very easy for the user to get a feeling for the game. 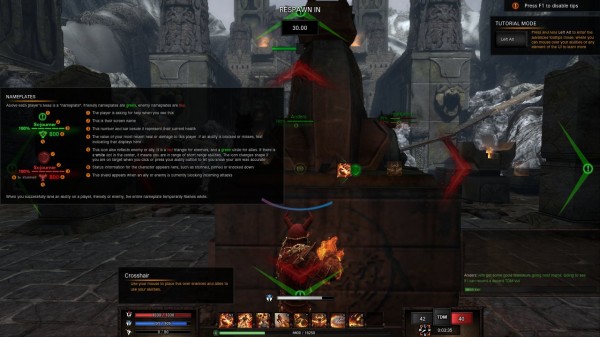 On the flip side of that, there is always going to be a sense of discovery with the game. The easiest abilities to use, those which require the least information to get started with, play off the left mouse button by default and are effective enough to get a player started in combat. Mastering the game is not something we anticipate everyone will do quickly. It will take some time. But, we are taking steps as described above to ensure that while the game isn’t something you can master in a match or two, it is something you can have fun with until you get there.

Question 4: Players like a variety of characters to choose from. With the given set of five classes is there any chance we could see more classes beyond initial release?

Absolutely. In fact, the Ravager class is deep in production already. It’s a melee class built to stay in the thick of things and has a grappling hook as its primary means of mobility from point to point on the map as well as between players. We have a total of twelve classes planned, five of which are released at retail launch on December 4th, the others to follow as development continues.

Question 5: Of the five playable classes, my favorite to class to play as is the Pyromancer due to his unique special effects (Skill: Wall of Flame). As a developer what class was your most favorite to work on and why?

I think our favorite class shifted as development progressed. For a long time, the Assassin and Pathfinder were at the top of the list for many of us simply because they struck a chord with the types of characters we generally like to play in these settings. At this point, it’s so spread that I’m not sure we could even come up with one that stands out for us as a whole as the favorite, though the Pathfinder would probably be our most played if you checked hours from the start of the game’s development.

Question 6: Skill and attribute customization is in the works right now. Can you give an example of how this can affect the PvP experience between low level and high level players?

Mainly in the options they have available to them. It was critical to provide players a way to customize their characters for their own play preferences and build this into a progression system that would provide them with something to look forward to as they play. We want players to feel that as they grow to know the game inside and out and figure out what their preferences are, they have a way to tweak their character to specialize in those preferences. Maybe they prefer speed over defense, or find that they never feel they have enough resources at their disposal. Using the customization points they can shift these values around for their character. It may also be that they feel they have an easy time with one class but a more difficult time with another. Armor points allow them to shift their armor into an area that helps protect them against those classes they have a harder time with while reducing their protection against those classes they do not. 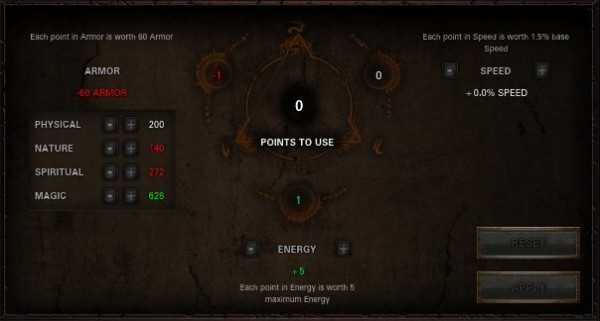 As for ability customization, things become very specialized there. It’s impossible to build a version of an ability that is the best version for everyone. Someone will always have a way an ability would work better for them, if only it was done just slightly differently. Ability focus options allow us to provide those choices to them. As an example:

Camouflage is an ability for the Pathfinder that has several uses. They can use it to mostly hide themselves from the enemy, as well as while in camouflage to target an enemy or ally and swap locations with them. Currently, this ability requires that the Pathfinder stand still or the effect breaks. They’re also able to attack while Camouflaged because of this “you must remain stationary” requirement.

With the ability focus options, they can choose a camouflage that allows them to move at the expense of the ability to swap locations and a 50% damage reduction while camouflaged.

Tweaks like these are inherently balanced through the act of forcing a sacrifice to the ability in order to gain a benefit, but still provide the player with a way to make the ability and their class their own.

Question 7: Sticking with the customization topic, at the moment characters of the same class look the same. Will there be a discernible factor between characters – color, armor?

We will have a few skin options available very soon after launch for each of the launch classes. One of the skins is reserved for our Pre-Order customers as part of thanking them for getting in early and the other for characters that reach level 99. As the game progresses, more skins and even factions (where the entire theme of the class is different, switching from Valkndar to the Mopachi faction for example takes you from a faction based on Nordic themes to one of Clockwork/Mayan will further diversify the look and feel of each class and player.

Question 8: Other games have incorporated bots for players to practice new characters or builds before facing real combatants. Can we expect something similar in the works for Forge?

Absolutely, but we don’t have a timetable we can announce for that just yet.

Question 9: Currently matches can be accessed by finding a specific player or by jumping to a random game. Will this be consistent with the release, or will players be able to access a list of open/private games?

These two will be the primary methods of finding a game on release. Soon after we’ll expand the options to include joining as a group as well as looking through a specific list of servers similar to what you get through a server browser in a typical FPS.

Question 10: Being selected in Steam’s Greenlight must be exciting for an upcoming release of an indie title. How are you feeling right now with over 20,000 players having tested Forge in the closed beta?

It was and is extremely exciting. The field of competition was extremely tough. There were many games that were already released elsewhere with large, established fanbases ready to come in and help them get onto the Steam platform. That we still ended up in the top 10 and made it through the Greenlight process as early as we did gave us a lot of confidence that while we are just getting started, we have something special.

We feel great as far as the Beta is concerned. It’s easy to forget, especially for some players coming in, that this isn’t a title built with a budget or team anywhere near what is common for games they compare us to. As a true Indie developer, to be even mentioned in the same breath as industry juggernauts for whom we have the utmost respect can be at times overwhelming. The Beta has not been without its challenges, but that truly is what the Beta is for. At this stage, where we are now, we’re feeling great and are excited to get the retail release into everyone’s hands.

After conducting this interview, I feel that Dark Vale Games is taking consideration from its fanbase to incorporate ideals that make a strong online multiplayer. Notably, they are preparing for future additions before the initial game is being released – classes, maps, and character customization. With over 20,000 testers in on the mix, Dark Vale Games is surely to get their hands dirty to provide a well developed title. Stay tuned for more news regarding FORGE and its Steam debut.

Check out our preview for FORGE (here).

– Joshua Moris (A.k.A The Poid Pipper)

Forge Gets Patched and Discounted on Steam