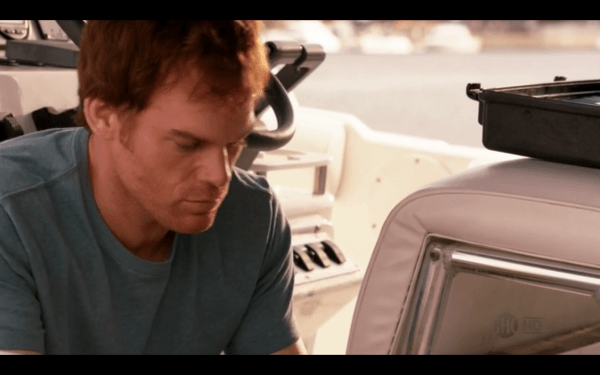 Dexter’s always been a really organized person, so it’s no surprise that this episode (‘Swim Deep’) starts with him cleaning the boat and feeling calm about it. He’s having a deep and meaningful with his dad about how Deb knows and is adjusting to the situation, with Harry expressing doubt at that. During his cleaning Dexter finds the blood from Louis’ kill, something that perplexes him entirely.

Back at the station Masuka is freaking out and interrogating everyone about whether or not he’s being fired because LaGuerta is using another lab to process the bloodslide. Which leads to Deb questioning LaGuerta, and LaGuerta bringing her in on her side project of finding out if the Bay Harbor Butcher is actually dead. Deb does a pretty good job of keeping her feelings inside, exploding when she gets into an empty elevator and using some really choice swear words to express her frustration at the matter.

Deb goes straight to Dexter with the issue and asks if any of LaGuerta’s suspected victims are his. Out of three pages he picks three victims, all of which are having their family and friends interviewed. Out of the three, only one has family in Miami, Barnes, and Deb says she’ll cover his family interview. Barnes was a wedding photographer who preyed on young, out-of-town women at weddings, snapping pictures for memories. Nice, bro. 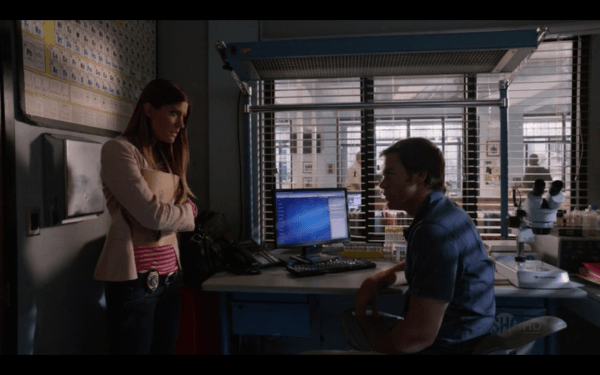 Dexter has other things on his mind though, with Louis’ death confirmed on his boat. He heads back to his apartment (does he actually work?) to find the curtains drawn and instantly knows that someone has been in his apartment. Being an organization freak certainly has it’s ups, because sitting in his apartment is Isaak with a whole bunch of funky tools.

Instead of going in, Dexter calls his answering machine and leaves a message pretending to be someone else reminding him of a lunch date. Sneaky Dexter is sneaky! Isaak packs up his tools, like a date who’s been stood up, and heads over to the lunch place. He passes Dexter’s car and Dexter remembers him from the Fox Hole and gleans that he’s from the Brotherhood, and why Isaak is after him (i.e. Viktor’s death). 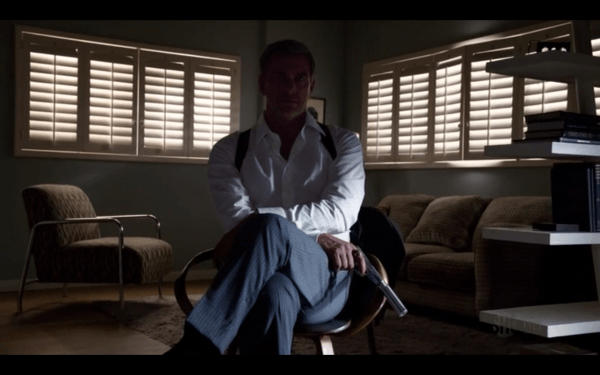 When Isaak arrives at the lunch place he’s given the phone by a waiter and shares a conversation with Dexter about why he’s stalking him. Isaak confirms that it is because of Viktor, and threatens the police and Deb.

Dexter begins to stalk Isaak to try and find more out about him, and discovers that he’s a boss, not a hitman like he previously thought. Mid-stalk batista calls him into the station saying Hannah McKay is coming in to talk them through the killer roadtrip she and Wayne took.

She takes them through using the random trophies that they have to explain the timeline of what happened. Dexter watches her closely as she talks about these murders, something is going off in his Lizard Brain, and he starts to suspect that something else is up.

That night Deb and Dexter are in the seediest motel ever, Dexter trying to come up with a plan to rid them of Isaak. They start reminiscing about past hotel room experiences from when they were kids and how Dexter has always kept an eye out for her. It looks like she’s trying to figure out what was real and what wasn’t between them, and she’s getting to the more sweet childhood memories.

The next morning they’re on a dig site trying to find the bodies that Hannah told them about. At the dig Hannah and Dexter start talking about the first time they saw blood (although Dexter’s experience wasn’t quite his first)

Hannah: Look at us talking blood and gore like we’re on a date sharing our first sexual experience.

Mhmm, yeah something’s definitely up with her. After that comment Dexter goes off to do some ‘work’. Or just get away from the woman who relates blood experience with a sexual one. 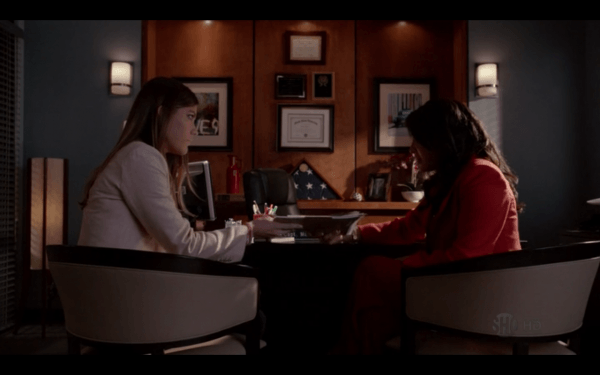 Meanwhile, Deb is getting ready to interview Barnes’ family when LaGuerta shows up to join in. Figures that it would be for this particular one. Barnes’ son seems over the moon about his father’s disappearance, and also wants to help make sure he never comes back (something pretty common in Dexter’s victim’s family reactions). He gives them some photos from Barnes’ last wedding gig, one of which has Dexter in it, and Deb quickly flicks past it and suggests they take a better look back at the station. You can almost hear her thoughts screaming ‘I f**king told you so, Dex!’ The haste with which she says it, and her slightly suspicious behaviour when investigating this with LaGuerta gives me the uncomfortable feeling that LaGuerta’s going to start suspecting her.

At the dig site, they’ve uncovered the bodies that Hannah told them about, a married couple. Dexter starts describing the story that the blood tells him and stops abruptly when he gets to the wife and looks straight at Hannah.

Hannah approaches him afterwards and asks why he stopped, and he says that he knows she killed the wife. Using a whole bunch of evidence and logic, he basically proves that Hannah killed her. Hannah just smiles at him and reveals that she has immunity because of her testimony. Then gives him some sex eyes and slinks off. This chick is crazy! I’m quite sure she’s above the crazy-hot line, well into the crazy side. 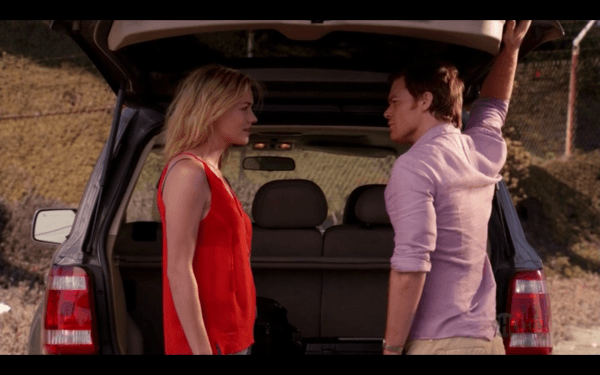 Isaak is pointedly follows him from the crime scene and Dexter decides to use this opportunity to enact his plan. He leads him to a Colombian bar (the enemies of the Brotherhood), with three angry looking Colombians, and escapes out the back. Unfortunately this doesn’t work out the way Dexter planned, with Isaak managing to take down all three Colombians with only a superficial wound in return. Still, that blood allows them to pin the three murders on Isaak and send him to prison. Unfortunately for Dexter, Isaak is a patient man and can wait to wreak vengeance, Dexter is a bit shaken, especially at Isaak’s performance at the bar, but he leaves with his head high.

Batista tries to convince Deb that Viktor is Andersen’s killer and that they need to go after him. Deb pulls rank, acts like LaGuerta, and shuts Batista down. It’s a big moment, especially since she’s always treated him like an equal, or even a superior. 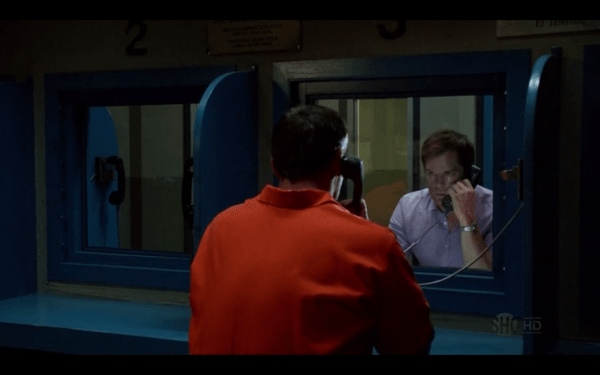 Deb and Dexter have a wrap up at his place, with Deb showing him the photo and proving that he would have been screwed without her. In doing this she also extricates herself from the situation, saying she doesn’t want to be a part in it, but she won’t do anything against him either. It’s a don’t-ask-don’t-tell sort of situation, with them agreeing to keep that bit of distance between each other.

Dexter: As kids Deb and I would try to outrun the waves, but I’d always end up diving under them. I’d swim deep because I could withstand the pull of the tide. But Deb was always safest at shore, from here on out I’ll face the depths by myself.

Next week on Dexter: Dexter stalks down Hannah trying to find out more about her, and Quinn gets in deep with the Brotherhood.