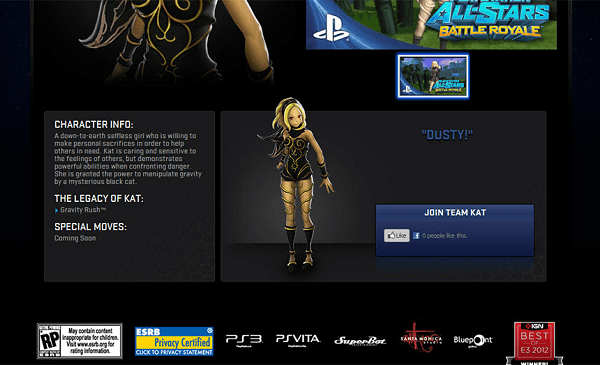 It seems that SuperBot Entertainment just can’t keep a lid on their staff, or at least Sony’s staff, because there have been so many rumors leaking out about PlayStation All-Stars: Battle Royale that one would think it would look like swiss cheese at this point.

The latest rumor happens to be an update to the PlayStation All-Stars website which was very quickly removed. However AllGamesBeta managed to grab an image of the bio stating that Kat, the main character of Gravity Rush would be joining the roster of PlayStation All-Stars. Now the bio itself looks extremely similar to all of the already official bios, and with Kat already being included in the next Hot Shots Golf game, she is quickly becoming a household name. As such it wouldn’t be too much of a surprise to see this gravity controlling lady as a fighter when All-Stars is released soon, though currently this should be taken as nothing more than a rumor.