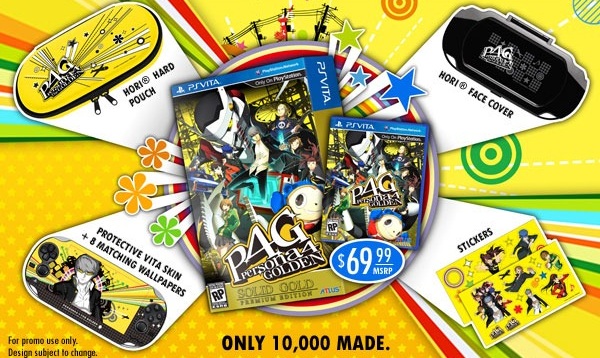 If you are frustrated with the fact that Sony absolutely refuses to release any special edition PlayStation Vita’s in North America or simply happen to be a major fan of Persona 4 then you’ll be happy to hear that Atlus’ recently announced special bundle for Persona 4: Golden gives you everything you need to turn your Vita into a Persona 4 Vita.

Releasing alongside the standard version of Persona 4: Golden, a Solid Gold Premium Edition will also be released for $70. This premium edition comes with a set of stickers, a protective skin for the Vita, a pack of digital wallpapers, a face cover for the Vita and even a Persona 4 themed Vita pouch, all of which can be seen in high-res below. It is worth noting that there are only going to be 10,000 of these Solid Gold editions released, so you better get your money ready for pre-order.

Persona 4: Golden is now available for the PlayStation Vita