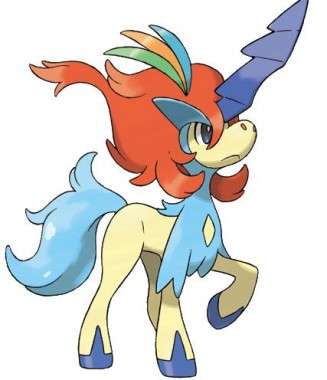 It’s yet again time for another Pokemon event, and this one is to get the legendary Keldeo. Beginning September 15th, players can download Keldeo at participating EB Games/Gamestop and Target locations to their copies of Pokemon Black & White. This particular Keldeo will also be able to be transferred into Pokémon Black Version 2 or Pokémon White Version 2, where it will be able to change into a new form and learn a new technique.

Check out the details for Keldeo below, and you can find a link of participating locations here.

Because the Colt Pokémon cannot be found during normal gameplay, this distribution is the only way Pokémon players can receive it at this time. During the distribution period, 15th September through 10th October, Pokémon fans can bring their handheld console from the Nintendo DS® or Nintendo 3DS™ family of systems and a copy of Pokémon Black Version or Pokémon White Version to selected EB Games and Target stores and receive a Keldeo that knows Aqua Jet, Leer, Double Kick, and BubbleBeam. As a Fighting- and Water-type Pokémon, Keldeo excels at moves that are super effective against seven different Pokémon types: Normal, Fire, Ice, Ground, Rock, Dark, and Steel.

Powerful in its own right, when transferred into Pokémon Black Version 2 or Pokémon White Version 2, Keldeo can learn its signature move, Secret Sword, and transform into Resolute Form, a new look that features a more prominent horn on its head. Secret Sword is a Fighting-type move, well suited to Keldeo’s high Special Attack stat. Because Keldeo can learn this move from the very first stages of Pokémon Black Version 2 or Pokémon White Version 2, it will be a powerful ally as you continue your adventure.