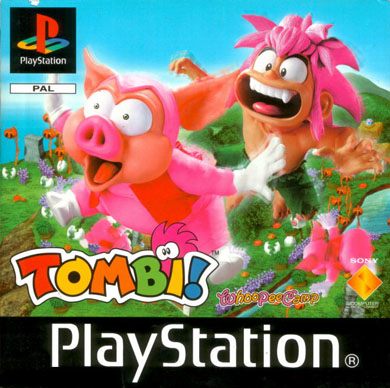 Tomba! or Tombi! as it was known in PAL regions, is one of the games that my childhood revolved around. A side scrolling 2D platformer with a few 3D elements, the game was one of the many playable demos to be found on the Demo One disc that shipped with PlayStation consoles.

I played that demo a million times. But the actual game upon release sold poorly, and I never managed to get my hands on a full copy of the game until a decade later, when I scooped it off Ebay – happily paying more than the standard price for a brand new retail game at the time. And why was that? Because this game is an absolute gem. Starring a pink haired, six packed boy called Tombi, this colourful, slightly barmy adventure saw players tracking down the Seven Evil Pigs in order to recover a golden bracelet, and generally save the world.

It has personality, charm, and features a lead protagonist that defeats enemies by clamping onto the back of them with his teeth. You can collect different colours of tight fitting pants, rescue puppies, collect butterflies and then capture pigs in magic sacks. The soundtrack is catchy and lively, and gameplay often provides a tricky challenge, with plenty of sidequests to bolster up the main story. It is one of my favourite games ever, and here’s hoping the sequel manages to follow the original, because I still haven’t managed to get my hands on that one!

The game has just seen a release on the PlayStation Network thanks to Monkey Paw Games, whom I would be handing my money to right now if it was available in Australia….patience…patience child…