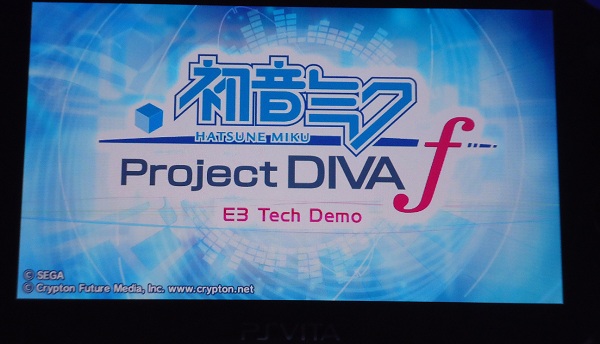 Despite the fact that fans of Hatsune Miku in North America have voiced their desire to play her various portable games in North America, Sega has never heeded these cries. However on a small little podium in the very corner of the PlayStation Vita section of Sony’s booth there sat a game that we may have never seen in North America and just might be the only time I will ever get my hands on the game outside of importing a Japanese version of the game at a much later date and at a much higher cost.

This podium contained Hatsune Miku Project Diva f on the PlayStation Vita. To my surprise, not only was this a fully functioning version of the title with two songs available for play, it actually contained full English menus for easy navigation and translated loading screens. After picking my jaw up off the floor at seeing this unexpected title with English translation, I selected the song, World’s End Dancehall which featured a performance with not only Hatsume Miku but Megurine Luka as well, instead of the song Catfood which featured a solo Hatsune performance. 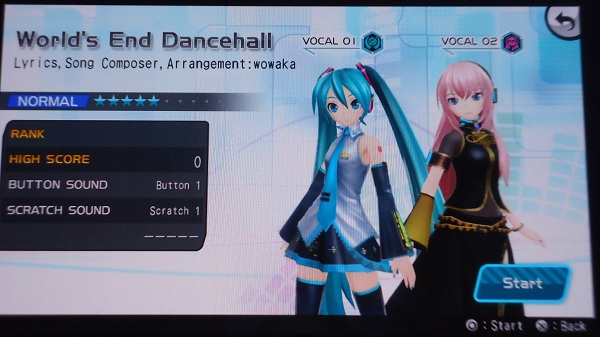 Interestingly enough, even the introduction to the song itself was presented in English and then the song began. As one who follows the game knows, the title features simple button presses to match the on-screen prompts to hear the vocaloids sing. These on-screen prompts change with your difficulty level, and the more accurate you are with your button presses the better rating you will receive, including Greats, while missing can be either Bad or Worst. Doing too poorly will in-fact fail the song and present you quite a sad Miku and Luka, however succeeding feels absolutely great given the rarity of the title.

Hatsune Miku Project Diva f also takes advantage of the Vita’s touch screen controls, for whenever a star icon appears the player must swipe or tap the screen as the star reaches the target. These swipes are also given various ratings which contribute to the song itself. Visually the title was quite amazing as it featured a choreographed dance battle between Miku and Luka and their back-up dancers. 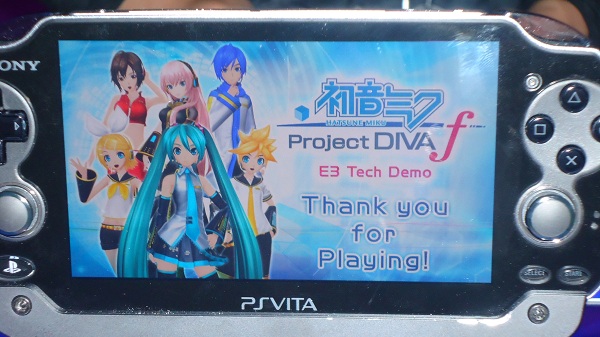 Now despite the fact that there was an English demo in a completely playable condition, I spoke with a nearby Sega representative to see if this was perhaps a good sign that finally, a Hatsune Miku title would come to the West in the form of Hatsune Miku Project Diva f. However, the representative told me that there are currently no plans on bringing the title to the West, as the demo station itself was simply a way to gauge interest on Miku herself. Now despite this bad news, this is indeed a good sign for those looking for this title, as it shows that with only a few pieces of actual translation in the game’s menu system and presentation, leaving the Japanese songs themselves alone, Sega could easily release this title digitally through the PlayStation Store and rake in quite a large amount of sales in North America, if not the world itself. So, let Sega hear your voice by letting them know just how eager you are to see this title fully released!