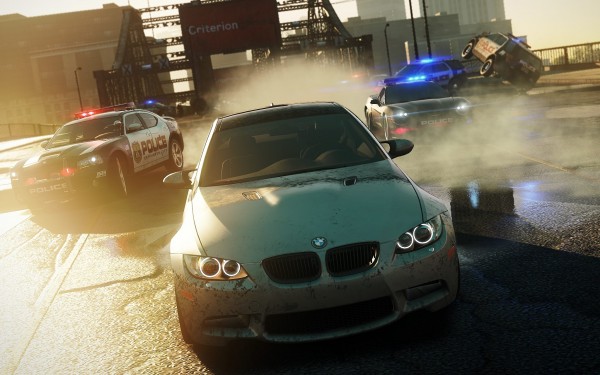 As the title would suggest, Dreamworks studio have secured the rights to produce a movie adaptation of the popular EA franchise Need For Speed. It was announced during a joint press conference between the CEO of Dreamworks Stacey Snider and EA President of Studios Frank Gibeau.

George and John Gatins have developed the original screenplay for the movie with it said to be based around the series as a whole instead of one particular movie. EA will maintain a producer role along side John Gatins and Mark Sourian. Scott Waugh who directed the military action hit “Act of Valour” is set to direct. Whilst Act of Valour was criticised for a lack of plot and weak acting from the soldiers, it was widely acknowledged even among critical reviewers to posses tremendous action scenes. So in that regard I think they should be set, since when did plot matter in a NFS game anyway?

According to the press blurb: “The film adaptation will be a fast-paced, high-octane film rooted in the tradition of the great car culture films of the 70′s while being extremely faithful to the spirit of the video game franchise. In Need for Speed, the cars are hot, the racing is intense and the story keeps players at the edge of their seat.”

Here is what Dreamworks’ Steven Spielberg, Stacy Snider and EA’s Frank Gibeau had to say on the project;

Steven Spielberg indicated that he would be having some creative input on the movie by saying “I’m excited about getting back into the creative trenches with John and George Gatins and my partners at EA to bring to life an exhilarating script based on an epic video game that seems to have been made for the movies.” Steven Spielberg the DreamWorks Chairman also stated that “This is a big piece of business for DreamWorks and we are grateful to Frank Gibeau, Pat O’Brien, Kevin Maher and John and George for choosing us to deliver their goods.”

“George, John and EA brought a very compelling story to us which we believe is going to make a fun, cool movie franchise,” said Stacey Snider, CEO and Co-Chair of DreamWorks. “With such a large following around the globe, we’re excited to make a film that does justice to the popular underlying video game series.”

“We are thrilled to be in business with our friends Steven Spielberg, Stacey Snider and the entire DreamWorks team,” said Frank Gibeau, President of EA Labels. “They are the perfect partner to take Need for Speed to the big screen by creating the exciting action film that we have always envisioned.”

“It’s fantastic to be working with a team that shares not only our love of cars, but also our passion for creating blockbuster action experiences. This collaboration will be greatly enhanced with the team at DreamWorks – which is a great home for the Need for Speed franchise,” said Patrick Soderlund, Executive Vice President, EA Games Label.  Added Pat O’Brien, Vice President of EA Entertainment: “Working with John and George to develop the script has truly been an outstanding experience.”

The project is set to be fast tracked by Dreamworks, with filming set to start next year targeting a 2014 release date.

Need for Speed is one of EA’s premier franchises, being a consistent best seller. Since the release of the first title, the series has sold more than 140 million units worldwide, generating an estimated $4 billion in revenue, making it one of the most successful series in the video games industry. (Don’t tell Turn 10 studios that though)