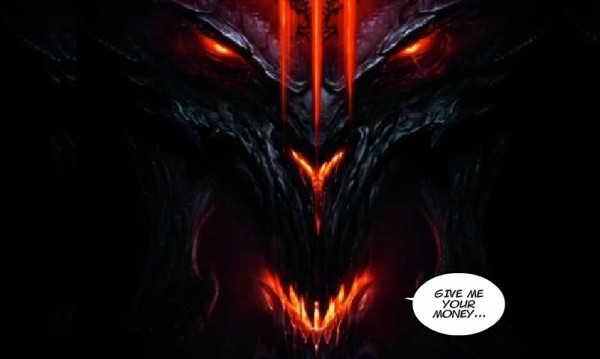 Remember the good old days when you could buy a video game and play through it completely without having to spend more real life coins on it? Unfortunately those days are over as it seems more and more developers are doing whatever it takes to grab more money for their titles. One of the latest fiascos of this sort has been the Real Money Auction House (RMAH) of Diablo 3.

For those that are unfamiliar with the RMAH, here’s how it works:

A player comes across a rare item while playing Diablo 3.

He or she then has the opportunity to set up an auction on the RMAH and post the item.

Players can set a minimum bid and/or an optional buyout price for the auction. 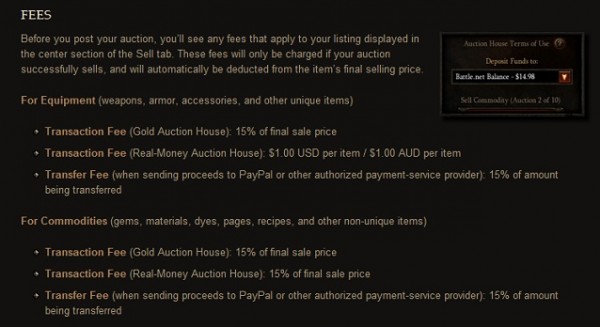 If all goes well, a buyer is found and the sale is on but, before all is said and done Blizzard takes a cut of the deal in the form of transaction fees; $1 USD/$1 AUD per item or %15 of the sale if the item being sold is a commodity. Then you have the choice of taking what is left of your payout from the sale in the form of credit on battle.net (Blizzard’s online gaming service) or actual money on PayPal…after another %15 transaction fee.

So let’s say little Johnny wants to sell his Rapier of Greed on the RMAH. He sets up the auction and for simplicity’s sake we will say it sells for $100 (there are items that sell for higher). Little Johnny loses $1 right off as a transaction fee. Then, since he actually wants the money, he opts for it to be sent to his PayPal account and therefore loses an additional $14.85 (%15 of the $99 being transferred). Poor Johnny gets $84.15 of his $100 sale on an item that he most likely spent hours upon hours farming. Now where does that $15.85 go? Straight into Blizzard’s pocket.

Sure enough, these rare items have been selling on the RMAH as they are almost necessary to beat the game on ‘Inferno Mode’ which is the highest difficulty setting. There has been some major backlash though. As one might imagine, most players refuse to pay real money to play through the game again and as such, the player base of Diablo 3 has dropped dramatically since launch week. Only time will tell if Blizzard’s money making scheme will pay off or sell out.