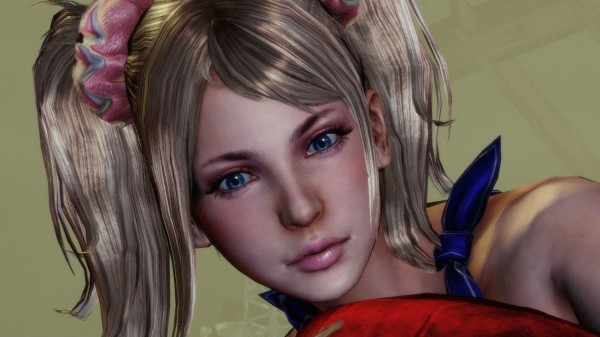 Look at that cute little face. There is no way that she could be part of a game that contains over-the-top acts of violence, sexual jokes, vulgar language nor would she ever dress provocatively in sexy outfits right? Well that is why we have the ESRB here to tell us what we already know about Juliet in Grasshopper Manufacture’s Lollipop Chainsaw.

Today the ratings board revealed their M rating for Lollipop Chainsaw and the entire rating can be seen below, which is perhaps one of the longest ESRB rating descriptions we’ve seen in a long time.

This is an action game in which players assume the role of Juliet Starling, a zombie-hunting cheerleader who must prevent the apocalypse. Players use a chainsaw, explosive rounds, and special attacks (e.g., performing cheerleading routines; mowing down enemies with a crop harvester) to kill zombies in melee-style combat.

Some attacks (e.g., Sparkle Hunting Bonuses) require dispatching multiple zombies at once, and are highlighted by slow-motion effects and close-up camera angles. Cutscenes also depict over-the-top acts of violence: a zombie boss shooting himself in the head; characters getting sliced in half by chainsaws; Juliet punting a decapitated head in slow motion. Exaggerated blood splashes, dismemberment, and decapitation occur frequently. During the course of the game, players can dress Juliet in revealing outfits (e.g., Sexy Rider Suit, Sexy Seashell Bikini) that expose large amounts of cleavage and/or buttocks.

Numerous jokes in the dialogue and on-screen text also reference sexual material (e.g., “Officer Stephanie sometimes used her nightstick to pleasure herself to yearbook photos,” “[She] had ‘backdoor’ sex with over three hundred sailors back in the day,” “Is it normal to have an erection as you die?”). A variety of sequences allude to drug use (e.g., “Old McDonald’s been smoking too much weed,” and “[Influences:] Rick James, eight-foot piles of cocaine. . .”). The words “f**k,” “sh*t,” and “c*cksucker” can be heard in dialogue.